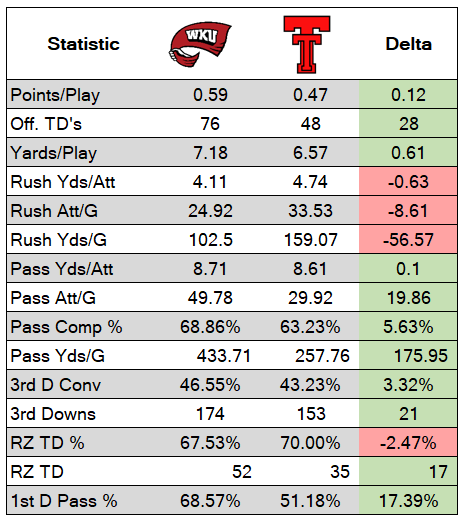 I wanted to take a moment and consider the offensive change that we’re about to see. I took some of my favorite statistics from college football stats that try to tell the story about what Zach Kittley and Western Kentucky was in terms of an offensive team and what Texas Tech and Sonny Cumbie was as well. Neither one is wrong or right, just different.

One statistic that didn’t make the cut was time of possession. You’re probably thinking that it would favor Texas Tech by quite a bit, but you would be wrong. WKU held onto the ball for 27:40 per game and Texas Tech had the ball for 27:56 per game, so a full 16 seconds of difference between the Zach Kittley experience and Cumbie’s offense. One statistic that can’t find is the number of possessions and my guess is that this would be significantly in favor of WKU, so it would be one I would guess would greatly favor WKU, so my guess is that they made up their time of possession in the number of possessions and I would guess that Texas Tech made it up by running the ball more. And nationally, these two teams were #114 and #115 in the country in time of possession nationally.

I think this is more of a preview of what’s to come than anything else, and as I wrote above, this is not a criticism of Cumbie’s offense, but what we can expect. WKU was obviously a better scoring team by a wide margin. The points per play is telling, but when you throw in total touchdowns, it sort of puts it into perspective, 28 additional touchdowns for WKU. WKU was also a more wide-open offense, over half a yard more is significant. Where things take a dip, which we sort of probably guessed, are the running statistics. Texas Tech very much ran the ball and I think ran the ball well with Cumbie at the helm. You sort of trade the 8.61 less rushing plays for the nearly 20 additional passing attempts in the grand scheme of things.

I do look forward to better third down conversions and you’ll note as well the additional third downs, 21 over the course of a 14 and 13 game season. I also found the red zone touchdown percentage to be interesting and was a little perplexed by the numbers, the Texas Tech offense was better from a percentage standpoint, but from a pure numbers standpoint, WKU had 17 more red zone touchdowns. And the last statistic that caught my eye was the first down pass attempts, nearly 70% for WKU and 51% for Texas Tech. Lots and lots of first down passes are headed your way (which I’m absolutely fine with).