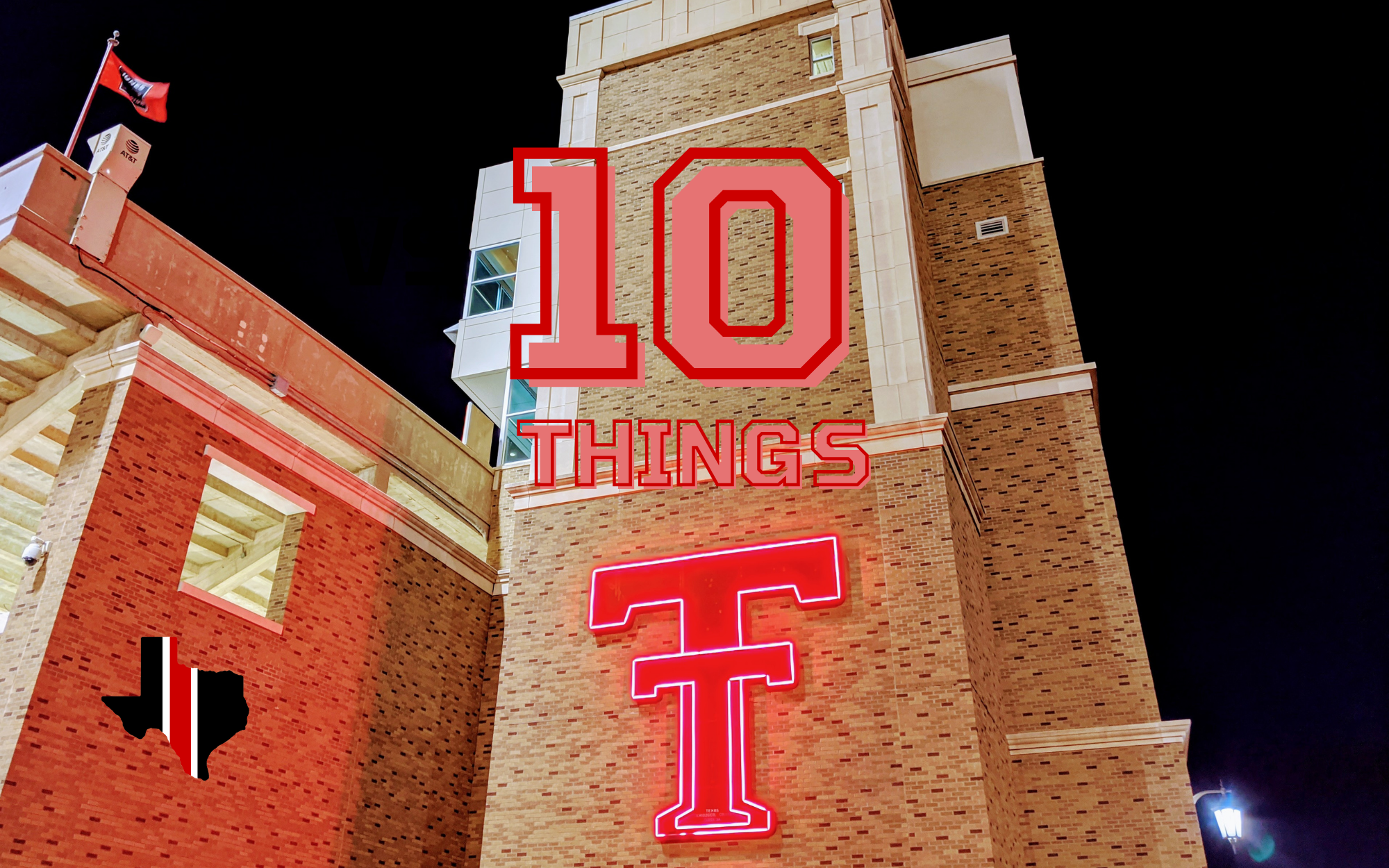 The second to last 10 things of the year.

2. Missed Opportunities. I sort of felt like this especially in the first half, but admittedly I was watching this while playing Monopoly with the kids and trying to spend some family time together. Slightly distracted (while dominating Monopoly), but still watching. Maybe that should have been the title of this section. I’d tell you that the Rayshad Williams non-interception felt like a really big call that I thought was a pick, the Donovan Smith fumble, the first big play for Baylor for a touchdown, were all pivotal in some respect. Just missed for whatever reason and you sort of wish that Smith would have felt the pressure, that the replay booth would have made a different decision on the Williams pick, not having Colin Schooler trying to cover that running back on the outside (that was a brilliant call and absolutely intentional and of all the things that could have been avoided, that was a big one). I also really hated that Storment unnecessary roughness penalty to start the third quarter, just putting yourself in a hole for really no reason for that and Storment has had more of those types of penalties than I can remember any offensive lineman in recent history. I’m a bit glad to see a change in left tackle moving forward.

3. Made Opportunities. With the coaching carousel getting very much underway it seems as if the biggest opportunity was the hiring of Joey McGuire and getting ahead of what is likely to be an absolute free-for-all in terms of teams fighting for quality coaches. McGuire has had essentially a month to beef up the current 2022 recruiting class, start the 2023 class, pick his coaching staff, start to hire his support staff, and get a head-start on a process that needs time.

Something we’ve talked a bit on the Slack channel is that TCU has apparently hired SMU head coach Sonny Dykes as their new head coach. It would seem that going from Gary Patterson to Dykes is a culture shock in and of itself, but given the state of both programs, would you rather have McGuire or Dykes? I thought that Dykes would have been more of a candidate for the Texas Tech position, but the writing on the wall for Dykes to TCU has been apparent from the beginning.

The one thing that Dykes has going for him is that he has a track record of figuring out some of the best coordinators to hire, while McGuire has yet to ever be a head coach. Dykes is definitely more safe, while McGuire is a risk with high upside. I can almost guarantee that Dykes is not the recruiter that McGuire is, Dykes hired Ra’Shaad Samples for things like that, while McGuire really does believe that the entire staff recruits every kid and it starts at the top.

If McGuire can get his coordinator and assistant coach hires right and has the money to do that (which he is supposed to have) then I think I like swinging for the fences. Dykes is definitely more traditional and a safer bet of success, but Dykes success is largely rooted in Louisiana Tech and SMU’s success and not at the Power Five level. Granted, McGuire has no past history other than high school, but I’ll still take my chances with McGuire as Dykes will always need to find a coach that does recruiting and good coordinators, while McGuire seems deeply invested in being a rockstar recruiter and needing to find good coordinators.

4. More Offensive Consistency. I thought that the offense really hit on some big plays in the second half. The type of plays that make you sit straight up. Sonny Cumbie’s ability to shake loose an inside receiver is seemingly unmatched, absolutely loved watching Donovan Smith to McLane Mannix, but the amount of time that the offense put the defense out on the field is just unfair, 37 minutes for the Baylor offense compared to just 22 for Texas Tech. And in terms of the second half, Texas Tech held onto the ball for a total of 7 minutes compared to 23 for Baylor.

And I think the reason why Cumbie was hired over someone like Wes Kittley was because I think Cumbie’s offense wants to be more ball-control than what he’s shown, but a new offensive line coach, maybe some new offensive line pieces, and I think you’ll see an offense that is more concerned about controlling the ball than the big play offense that is the current reiteration of the Teas Tech offense. Cumbie does love going deep and I think he’s well suited to create plays that do that, but the offensive line has been a disappointment for me for quite some time and if Texas Tech can figure out how to more effectively control the clock, which isn’t always about running the ball, but also about those short passes is an area where I think Cumbie can improve upon, whether that’s running back screens, but finding some what to move the chains is incredibly important.

5. Defense Played Well Enough. The time of possession issue aside, the defense played well enough to win. Baylor just had a crap-ton more plays and opportunities than Texas Tech. BU had 84 plays to 52 for Texas Tech and the defense held BU to 5.2 yards a play, while Texas Tech averaged 7.4. Again, Texas Tech’s offense was more big play and Baylor just sort of wiped out Texas Tech through paper-cuts.

I am ready for a new defensive philosophy, whatever that may be. I’m not really a 3-man or 4-man sort of guy, I don’t know that this matters all that much. I like a lot of the players and feel as a group they’ve been better, but I’m ready for something new.

6. Is Donovan Smith the Future? It is certainly interesting to consider what happens at quarterback next year. I’d say that Smith was/is the best quarterback on the roster that could win a game, but with his father potentially moving on to another school, you wonder if he’ll be around by this time next year. If he is, that’s great, but like every team, the quarterback room is always potentially one to be re-made each year and I think the safest thing to write is that Behren Morton will be a quarterback on the roster next year because of all of the quarterbacks, I think that he committed to the school and not to the coach. Tyler Shough may be out of options in terms of transferring, while Smith will likely have the ability to transfer without sitting out a year.

“Incredibly proud of our team, the fight that they showed on all three sides of the football. Incredibly proud of how they continued to fight these last five weeks. What I told them after the game is true: Today in college football, today in life, it’s so easy when things go against you to take your ball and go home, to take your ball and stop playing and to stop fighting. If anything, these kids did just the opposite. They stood in the gap in a very difficult situation.

9. Bowl Game Next. I love listening to Sonny Cumbie and if you don’t listen to the press conference you should. Incredibly emotional and he’s got a lot of passion. On the verge of tears the entire way and he’s fully invested, without a doubt. And I’m proud that next weekend we’ll find out where Cumbie will lead this team in bowl game.

Tortilla Tossin’ Player of the Game: How about Travis Koontz, a 75 yard touchdown as well as 5 catches (on 5 targets) for 117 yards. Also nice to see McLane Mannix catch a 38 yard touchdown along with 57 yards receiving in what has probably been a very frustrating two years.

Swiss Army Do-It-All Defender of the Game: I’ve had a love-hate realtionship with Eric Monroe, but 13 tackles, 2.5 tackles for a loss on the day yesterday. Reggie Pearson also had 11 tackles and Schooler had 10, so big days from those guys.