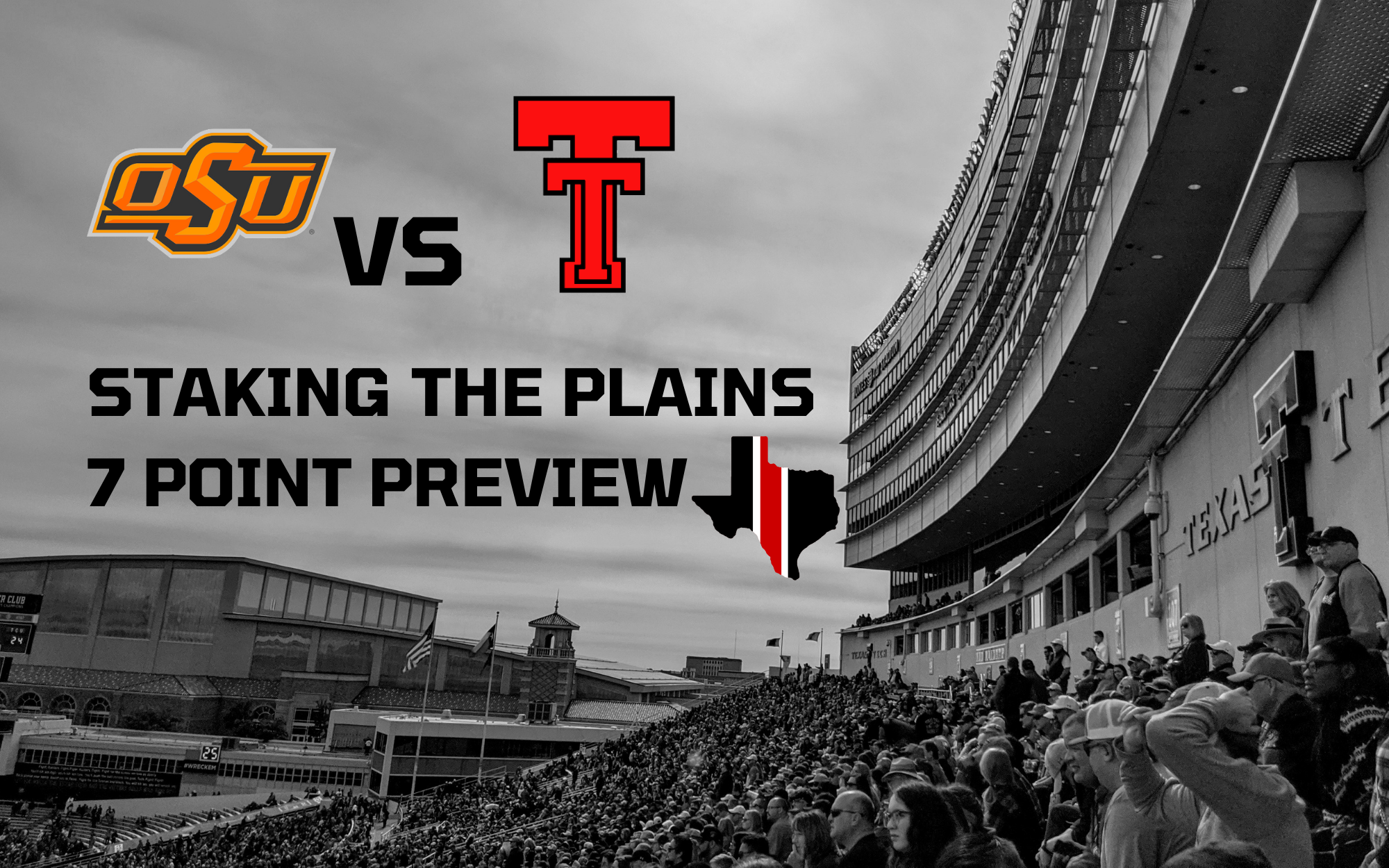 Oklahoma State is definitely on a roll. They lost a 3 point game to Iowa State on the road, but since then they’ve just murdered opponents, beating Kansas 55-3, West Virginia 24-3, and TCU, 63-17. As an aside, they put TCU down in 2 hours and 35 minutes. Imagine a sub-three hour game. The key for Oklahoma State this year has been a top 10 defense that’s performed as such the most points they’ve given up in a game was 24, the loss to Iowa State and a Texas win on the road. Sliver of hope? Oklahoma State scores 13 fewer points on the road, from 37 to 24, but the defense is really consistent, giving up 15 points at home and 17 on the road.

You should be incredibly impressed with the Oklahoma State defense. They are, by far, the best defense Texas Tech has played this year and it probably isn’t all that close. Baylor would be close to that, but not as good as OSU in my opinion. The Cowboys are elite in almost every advanced stat category, which is difficult to do in the Big 12.

LB Devin Harper (6-0/235): Most impressive thing about Harper is that he has 11, yes 11, quarterback hurries. That doesn’t lead to the sacks all of the time, but there is no better indication of pressure than hurries, and go ahead and being 2nd in the team with 65 tackles, 8.5 tackles for a loss and 4.5 sacks with 2 pass break-ups and 2 fumble recoveries.

S Kolby Harvell-Peel (6-0/207): Harvell-Pell leads the team with 3 interceptions, but also is 3rd on the team with 49 tackles, 2.5 TFL, and a pass break-up. You always know the deal, if there’s a safety who is picking off passes, that’s a pretty good sign for OSU.

LB Malcolm Rodriguez (5-11/225): Never heard of Rodriguez before, but he’s a senior and has 86 tackles, 8.5 TFL, 9 quarterback hurries, 2 forced fumbles, and a fumble recovery. Incredible activity and if you wanted to guess if Oklahoma State blitzes linebackers, the answer is probably yes.

Oklahoma State isn’t the most dynamic offense, but they are pounding the hell out of opponents, replacing Hubbard pretty easily, and they’ve been on an absolute roll offensively the past few weeks. Last week alone, the Cowboys ran for 447 rushing yards on 62 carries and have run for over 200 yards in 5 games this season.

RB Jaylen Warren (5-8/215): Warren has been the backbone of the running game with 1,041 rushing yards, averaging 5 yards a carry and 104 yards a game to go along with 10 touchdowns. Not a huge pass-catcher, 16 for 164 on the year, so a couple of catches a game, Warren is largely a running threat.

QB Spencer Sanders (6-1/210): Sanders has gotten better by doing less. He’s averaging about 25 yards less passing a game in comparison to last year, so he’s much more of a bus driver than last year. Sanders averages about 195 yards passing a game, has 14 touchdowns and 6 picks while completing his passes at a 62% rate.

I see no 60+ yard field goals here! This may be the one spot where OSU “struggles”. The Cowboys had a kicker, Alex Hale, that has made 3 of 6, missed all 40+ field goals. Then maybe he was replaced by Tanner Brown who has made 7 of 9 and been a lot more consistent.

Always time for a uniform combination. 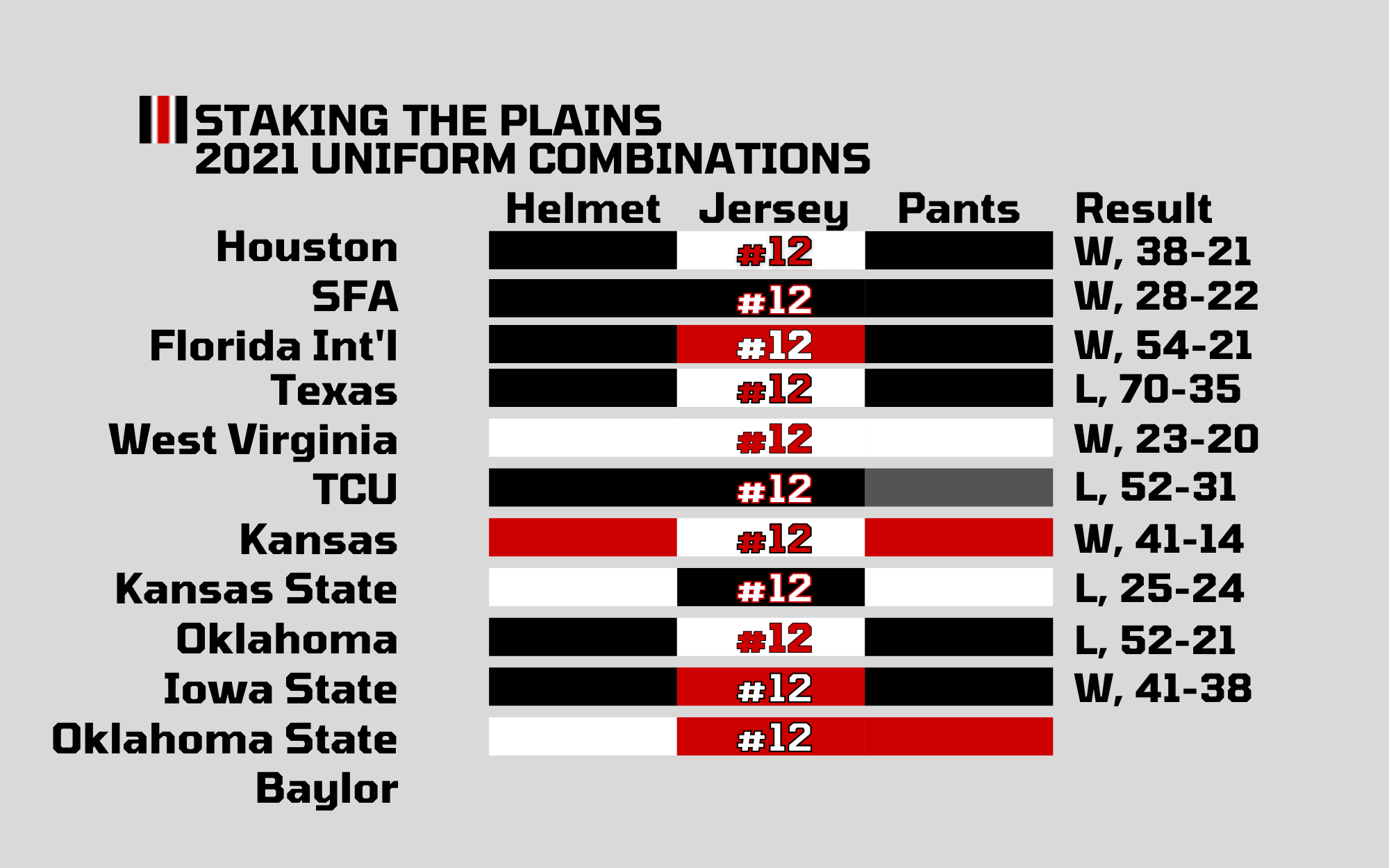 For the seniors.
For Fearless Champion.
One last ride in Jones AT&T Stadium.#WreckEm | @SidelineProv pic.twitter.com/TKjcdSc0VK

The six-year deal and 70-percent buyout are identical to terms Wells agreed to when he succeeded Kliff Kingsbury after the 2018 season. Tech is obligated to pay Wells a little more than $7.326 million in monthly installments for terminating him in the third year of a six-year contract.

Not a ton of time again, which is fine. I’m going to live with being perpetually behind on what I want/need to write. My brother-in-law sent me an article the other day and I texted him back and told him that if I’m working on the blog, I do not have time to read anything else. If I’m doing something else, then I’m really doing something else.

As far as this week’s game, I completely picked against Texas Tech last week. Thought there was no chance as ISU was too good on offense and defense. So balanced. This week, well, I am picking Texas Tech and taking those points, against the terrific Oklahoma State defense and I also took the under.