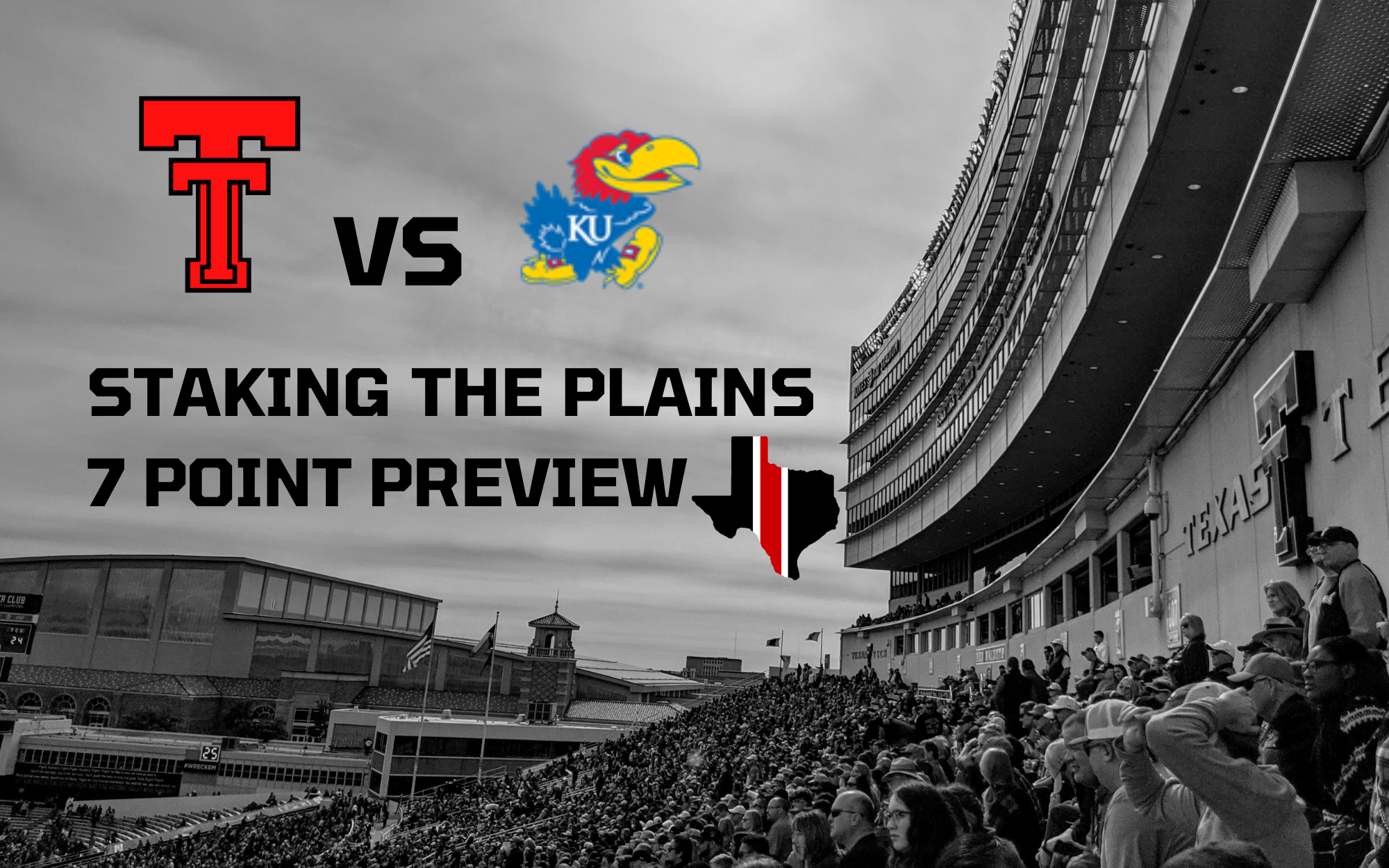 Kansas defensive coordinator is Brian Borland who followed Leipold from Buffalo and Wisconsin-Whitewater. Borland runs a 4-3 defense, but like every sort of defense nowadays, it is probably dependent on offensive personnel and would run with 2 linebackers and 5 defensive backs. Borland had tremendous success at Buffalo so his arrival at a Power Five program is probably well deserved.

The Kansas defense is bad in just about every metric. It’s the hardest thing to improve upon for a program that’s building. This is what gives me hope, a good offense against a terrible defense.

It’s not very often that you have the tight end coach be the offensive coordinator, but that’s Andy Kotelnicki. Another follow from Buffalo, Kotelnicki was in charge of a Buffalo offense that ran the damn hell out of the ball, averaging 478 yards a game and 287 yards rushing. In fact, in 2018 Buffalo’s offense produced 5,803 yards, which is pretty darned good.

Jason Bean (6-3/189) is really the only quarterback who has done much thus far this season. I think the idea is to stick with Bean and hope that he improves to the point where they can find some stability next year (or perhaps even this year). Bean has run for 289 total yards, averaging 4.8 yards per carry to go with 2 touchdowns while he’s thrown for 170 yards a game with 5 touchdowns and 3 picks while completing 55% of his passes.

At the running back spot is Devin Neal (5-11/210) with Torry Locklin (6-2/205) and Velton Gardner see carries as well. Neal has carried the ball 54 times for 264 yards and 2 touchdowns with Locklin and Gardner each carrying the ball 29 times. Locklin is the more dangerous of the two.

Was saddened and disappointed to consider that some of the things that Kansas is very good at is an obvious weakness for Texas Tech. Kansas doesn’t have a ton of negative drives, can explode for plays and is decent running the ball. That’s not good for a Texas Tech defense that’s absolutely reeling.

Not a ton of time to focus on special teams this week (more explanation at the end). Jacob Borcila is the kicker, but has only attempted 6 field goals and has made 4, so a decent percentage, just not a lot of opportunity. Reis Vernon is the punter and is 78th in the nation averaging 41 yards a punt.

Injuries are all over the place for Texas Tech and I probably won’t even remember them all: QB Tyler Shough; RB Ahmad Brooks; S Reggie Pearson; and S Marquis Waters. Those are the big ones for me.

Your uniform combinations for the week. First time to wear red since SFA. 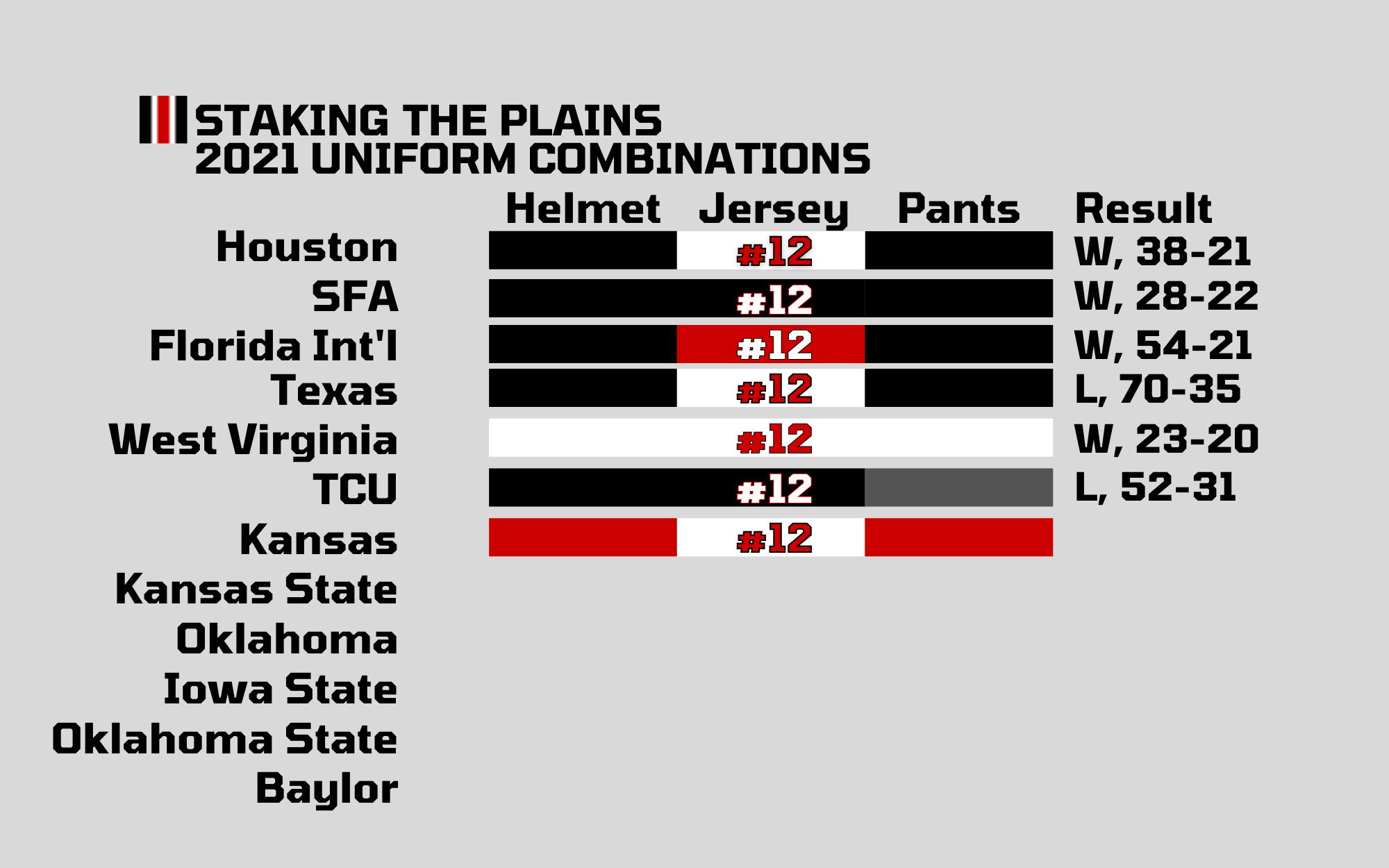 The most red that I’ve seen with grades in a long time and only 60 or so actually voted, which means that there’s apathy.

Dallas Morning News’ Ryan Mainville | Texas Tech prediction: Red Raiders have a chance to get back on track vs. Kansas

I’m betting what should happen this week. Texas Tech should beat Kansas by 17.5. That’s about where the line opened, then immediately moved to 15, then has creeped back up to 17.5 over the course of the week. Kansas is 0-4-1 against the spread this year, so I’m hoping that this holds true for this week as well. I’m also taking the under as I sort of expect Kansas to run more than they pass. Plus they’re 4-1 on the over/under. And this 7 Point Preview is normally a bit better, but my old man had some medical things pop up on Wednesday night (he’s good, but it was scary for a bit) and just lost a ton of time.