Your favorite sweat-wiping head coach Gary Patterson returns for his 22nd year with the Horned Frogs. Patterson has been weird the last few years, which begs the question that he might just be weird overall. He alleged that a coach was hit in the head by a SMU player, but there’s no video that this actually happened (and he sort of walked this back, but blames the coach getting hit on SMU anyway). This is similar to his allegation of being hit by a frozen water-bottle. That allegedly happened in September, which is still summer in Texas. The weird part is that Patterson doesn’t have to make up things to be a good coach. He already is. He doesn’t need to do this. It’s tiring.

I’m a bit surprised at the range of TCU, again, I think some preseason rankings are baked into those numbers and those are hard to shake at the beginning of the year.

Old friend Chad Glasgow returns to Lubbock as the defensive coordinator for TCU, he was here in Lubbock in 2012 and back in Ft. Worth since then. I would love to know how/why that became a disaster, and my guesses will start with Tommy Tuberville being an absolute disaster and just let that simmer.

Up front, Earl Barquet (6-3/277) and Corey Bethley (6-2/313) are your tackles with Ochaun Mathis (6-5/257) and Dylan Horton (6-4/250) as the defensive ends. TCU almost always has athletic defensive ends and my guess is that this year will be no different. In fact, I think that TCU has a type of defensive line and this pretty well fits that type. Barquet and Bethley are intended to stand in the way, while Horton has 18 tackles, 4 TFL and 2 sacks and Mathis has 15 tackles, 2 TFL and a sack thus far.

TCU has run a 4-2-5 for as long as I can remember, the basically invented that concept as far as I’m concerned. Dee Winters (6-1/230) and Wyatt Harris (6-3/229) are the linebackers with Winters registering 22 tackles, 2.5 TFL, a sack, and 1 interception and Harris has 18 tackles with a pick and a couple of quarterback hurries.

As a quick aside, TCU is 128th in tackles for a loss with 16 and 118th in sacks. So there’s not been a lot of pressure plays thus far this year. Also, 104th in allowing 3rd down conversions.

TCU has struggled on defense and maybe the NFL Draft has caught up with TCU just a bit as they had terrific safety play last year and it’s difficult to replace that sort of talent gap and maybe that’s where TCU is at. They haven’t been great at stopping the pass and as you’ll note, TCU doesn’t exactly have tall cornerbacks and there would likely be an advantage to be had there. TCU is also giving up a lot of explosive drives, which is a strength of Texas Tech and has remained that way even with Colombi calling the shots. Texas Tech’s strengths really do play into what TCU doesn’t do well. The one key here is that Texas Tech may not run the ball a ton on Saturday, it might be similar to what happened against West Virginia and that may mean an uneven offense as I think the running game is a huge part of Texas Tech’s success.

Doug Meacham returns as the full-time offensive coordinator after allegedly splitting duties with Sonny Cumbie the last couple of years, but the thought was that Meacham was really calling plays for the most part and Cumbie was very well on the way out, not having his contract renewed.

The offensive line is relatively experienced, with juniors and seniors with one sophomore. Carter Ware (6-4/254) is the tight end, but has no catches on the year so if he’s in the game, he’s typically not a threat. TCU has allowed just 6 sacks all year, which is 1.5 per game and they’re a team that runs for 200 yards a game, so making stopping the run a priority is key here.

The Texas game for Texas Tech really took things into the shitter. Drive efficiency shot way up and just sort of ruined any good will that was maybe there and it will take time to statistically climb out of that hole, if they even can. Stopping the TCU run game will be the highest of all priorities and if Texas Tech can’t do that, then it could be a repeat of the Texas game. One thing that bothers me significantly is that TCU is 4th in the nation in 3rd down completion percentage, so they will extend drives on you and that’s a bad thing for Texas Tech.

Griffin Kell handles both kickoff and kicking duties. Kell has made 5 of 7 field goals, so they’re just not kicking a ton and that’s a fine percentage to make. Jordy Sandy is the punter and is from Australia, so expect that and he also averages about 47 yards a punt.

We’ve talked about how this Texas Tech team is so injured and that’s going to be a problem at some point if some guys don’t get healthy. My hope is that DaMarcus Fields, Erik Ezukanma, and Dawson Deaton are able to return after being placed in concussion protocol last week. We don’t know about Reggie Pearson, he’s supposedly day-to-day, but a safety with a shoulder injury usually isn’t great news.

From what I can tell with TCU, Quentin Johnston is questionable this week while Atanza Vongor is out for the season (I don’t know who he is).

Uniform combinations with some throwbacks headed your way this weekend. And as I’ve stated before, the old double-T should be the only logo that Texas Tech uses. Get rid of the completely unnecessary bevels. 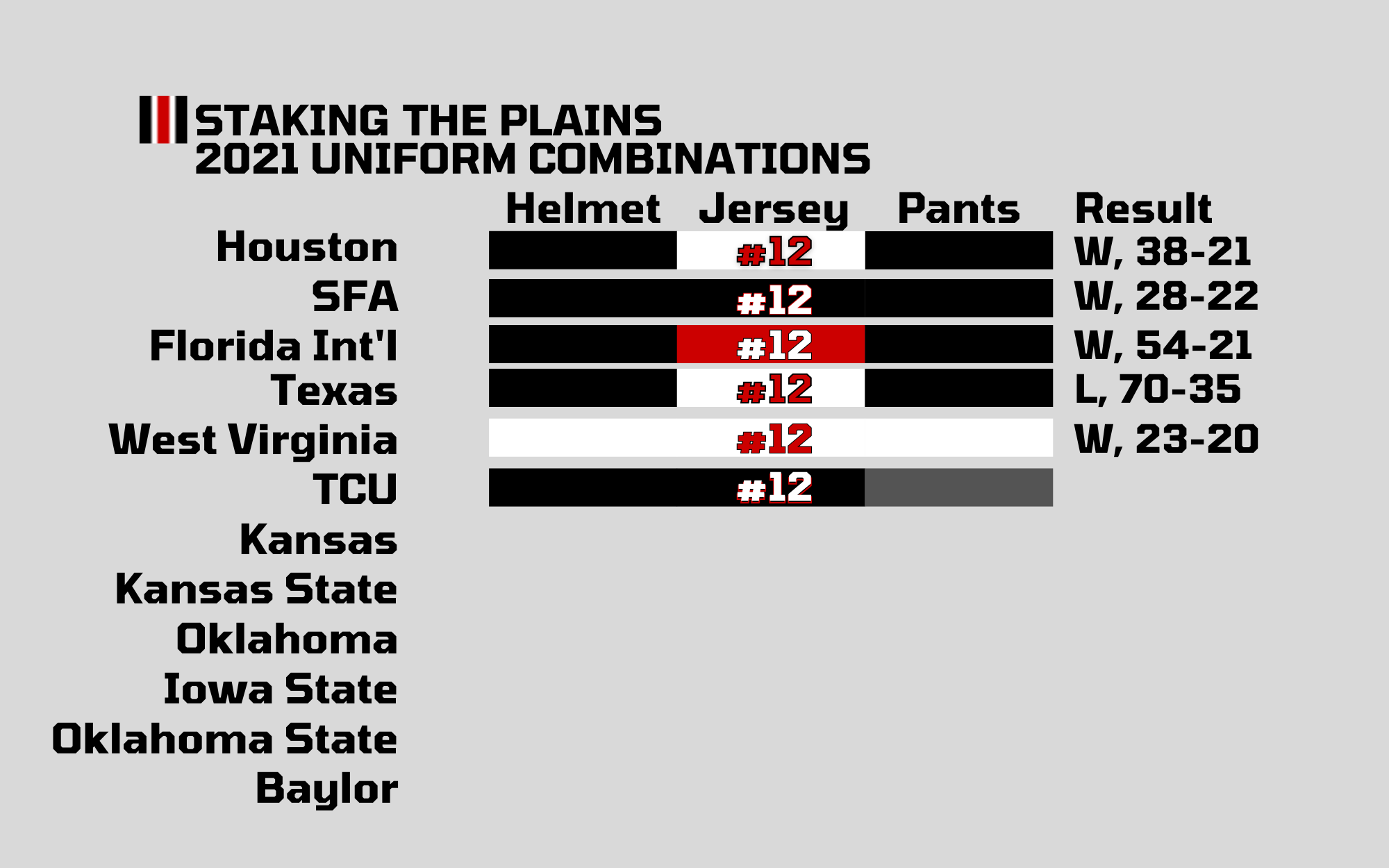 And the grades from last week as well, which were much improved. Not as much red and orange for sure.

Via Don Williams. The comments from this tweet allude to a possible Mahomes athletic dorm where the bubble and/or coliseum was previously located.

Texas Tech says it will make a major announcement Friday regarding The Campaign for Fearless Champions fundraising endeavor. Press conference with president and AD outside the Football Training Facility. https://t.co/ryTUIgo4zv

I hit on both bets last week, which was to pick Texas Tech and the under. I think I’m going to roll with that idea, TCU is still a 1.5 to 2.5 point favorite and although I haven’t made the bet, I’ll take the under of 60.5, but I’m not a huge fan of that number. As an aside, TCU is 0-3-1 against the spread thus far this year while Texas Tech is 2-2.