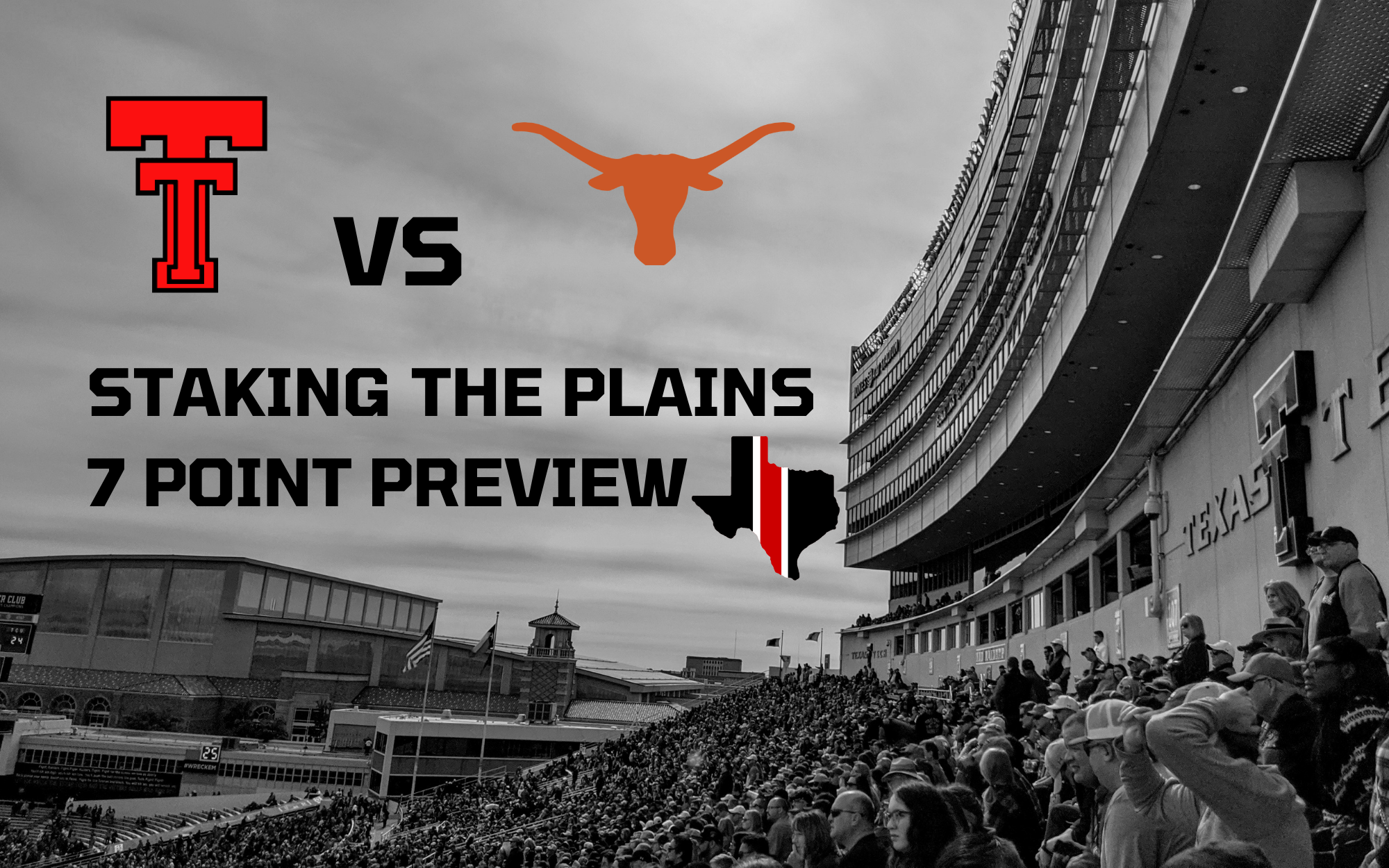 This is where it gets fun.

The Longhorns host Texas Tech with Steve Sarkisian leading the charge. Sarkisian was the head coach at Washington over a decade ago, from 2009 through 2013, then was the head coach at USC from 2014 to 2015 where he was unceremoniously fired for alcohol related discretions. The great rehabilitator, Nick Saban, took Sarkisian on as an offensive analyst for a year, then spent a couple of years as the offensive coordinator with the Falcons, before returning as the offensive coordinator to Alabama for two years before being named as the new Texas head coach.

Sarkisian’s debut as the head coach started well against Louisiana with a 20 point win and then had their tails handed to them by Arkansas where the Hogs ran for 333 yards and over 7 yards a rush. Texas leaned heavily on the running game against Rice, running for 428 yards, 2 running backs over 100 yards rushing and a third with over 80.

Regarding the overall stats, there’s probably some preseason bias baked into the ratings for UT, but I can’t be 100% sure about that. I think they sort of have to have some preseason numbers because the sample size just isn’t enough at this point to give an accurate reflection of what the teams are without those numbers. Regardless, I think that the range of 41 to 27 for Texas Tech is about right and ESPN’s FPI rating being 34 also feels pretty accurate. With UT, I don’t know that any of their performances thus far indicate a top-15 team, but what do I know. The Louisiana win was very good, but from a resume standpoint, I don’t see it.

The strange thing here is that I’m waiting for there to be some sort of huge sort of difference maker and I’m not seeing it. That doesn’t mean that Texas doesn’t have play makers because I am sure that they do, but they are not necessarily making plays. This makes a lot of sense to be honest. Texas played a tight game against Louisiana and probably did fine defensively, holding the Ragin’ Cajuns to 18 points. Then the defense was on the field a ton against Arkansas and probably couldn’t get off the field and they weren’t making plays behind the line of scrimmage because Arkansas was running the heck out of the ball. Then, against Rice, my guess would be that since the Longhorns scored 58 and Rice scored 0, the defense probably wasn’t out on the field very much, if at all.

Texas is, well, Texas. they have high-end athletes and for a long period of time, they’ve failed to live up to a lot of their expectations. I think it is interesting that they start all seniors across the back end of the defense and Brenden Schooler (6-2/206), who was a receiver last year, is now the starting free safety. The cornerbacks are D’Shawn Jamison (5-10/184) and Josh Thompson (6-0/191) with B.J Foster (6-2/199) as the other safety and Anthony Cook (6-1/191) as the nickelback, which they call the “star”.

Texas is 51st in sacks (Texas Tech is 37th), 67th in tackles for a loss (Texas Tech is 26th), 87th in interceptions (Texas Tech is 9th), and 83rd in forced turnovers (Texas Tech is 42nd). So yeah, they just haven’t done a ton of things. Again, I want to make it clear that they certainly could do things, but they aren’t making a ton of plays right now.

Statistically, the Texas Tech offense hold a decent advantage, but I still worry about Texas Tech’s consistency. The UT defense was gouged by Arkansas and that probably had a significant effect. What Texas Tech seems to be having a tremendous amount of success is play efficiency, i.e. when they do something, they are highly successful, that they are exploding with high-end plays and drives and are minimizing those negative drives. I think UT’s issue with the play efficiency and negative drives is largely because Arkansas absolutely ran the ball on them and just took it in the shorts drive after drive.

I think the big ticket item to discuss is the quarterback position, where there was a battle all spring and preseason camp where it was determined that Hudson Card (6-2/200) was QB1, but was supplanted and replaced during the Arkansas game by Casey Thompson (6-1/192). I think that’s a pretty dangerous precedent, but Sarkisian must have absolutely hated the way that Card played. I think that Sarkisian likes to the big play, letting the receivers make huge plays and Card threw for 61 yards on 15 attempts. Thompson was better, but adds a running threat that Card doesn’t have.

Running back Bijan Robinson (6-0/214) is the star of the offense and he received a ton of preseason love. He’s had a good start to the season, over 100 yards against Louisiana and Rice, but was held to 3.6 yards per rush against Arkansas. Robinson will also break the big play and 62 of his 127 came on 1 play against Rice.

Xavier Worthy (6-1/160), Jordan Whittington (6-1/203), and Joshua Moore (6-1/168) are the starting receivers. Worthy is a true freshman and if there’s a receiver that is starting as a true freshman he can probably absolutely fly down the field and is a decent pass-catcher. Moore was a terrific high school player, that hasn’t shown out quite yet.

Defensively for Texas Tech, I think I take some comfort in that I don’t think that Texas has the #9 offense in the nation, otherwise they would not have changed up quarterbacks so quickly. Texas Techs’ biggest issue has been the sustained drive for opponents and I think Texas would absolutely love to do that. What Texas Tech has done an awesome job at is limiting the explosive drives and that’s a key tenant for Patterson. I think the thought process is that if you give a team enough opportunities, you’ll most likely have a team that makes a mistake somewhere along the way.

Cameron Dicker is the kicker and punter, which will be incredibly useful if if can pull that trick off in the pros and use up just one roster spot. As an aside, both back-up punters are from Australia. Thus far on the season, Dicker is 1-3, has made all of his extra points, and regularly knocks the ball into the end zone. Dicker averages about 42 yards a punt.

Xavier Worthy is the punt returner and can be dangerous, while D’Shawn Jamison is the kick returner.

Freshman Texas defensive back Ishmael Ibraheem is out for the year, while fellow freshman defensive back Jahdae Barron is out for the game and wide receiver Troy Omeire is also out for the game. As far as Texas Tech’s injuries, I think for the most part they are relatively healthy. Inside receiver McLane Mannix was out last week. He got dinged pretty well in the SFA game and am not sure as to his status. There were no questions about injured players at the weekly press conference and that’s usually a pretty good sign that most players are pretty healthy.

Here is your uniform combination for Saturday. 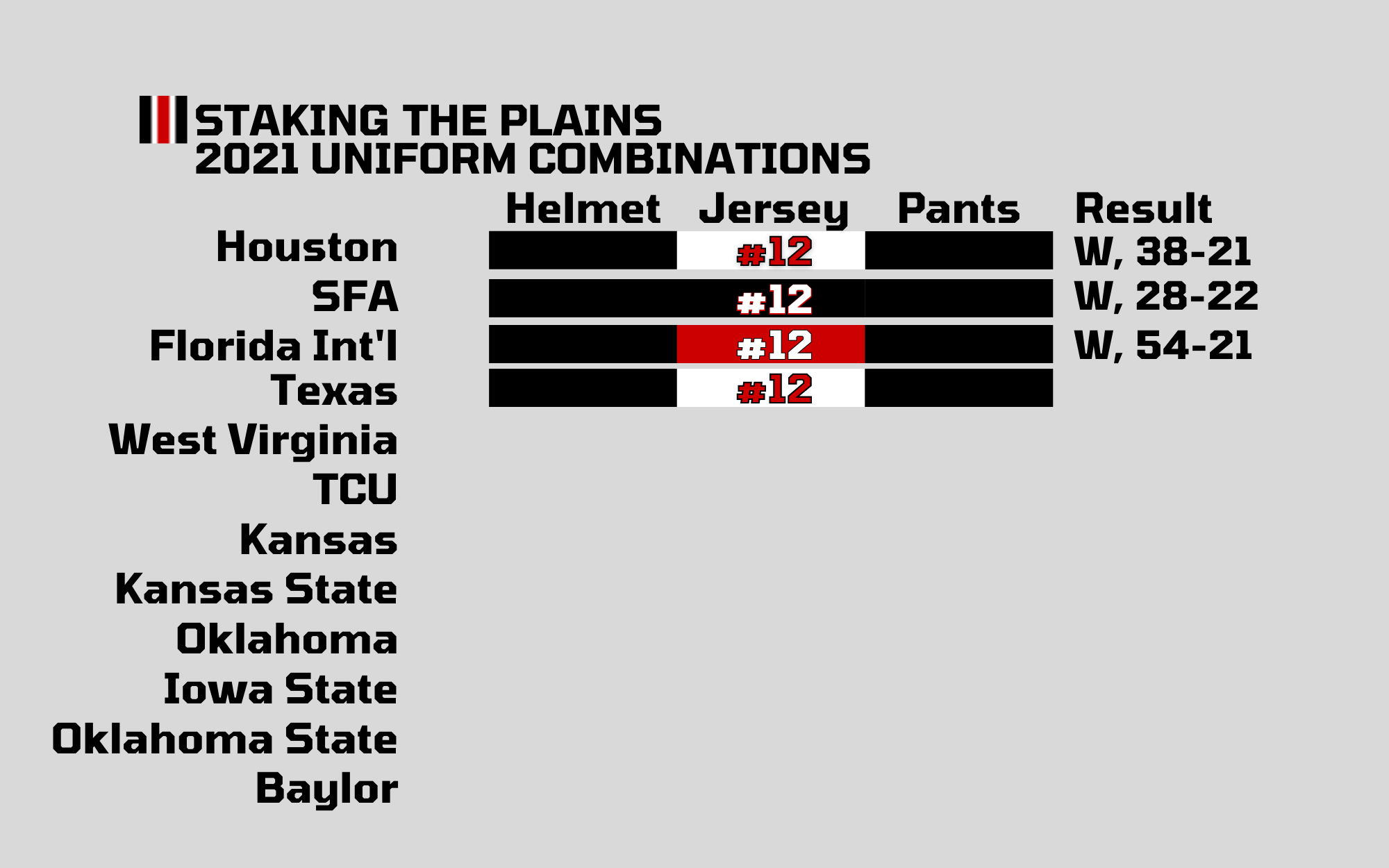 I also didn’t forget about the grades from last week. Only 69 (nice) or so people voted, so not as many people are partaking as in previous years. Maybe that changes with getting into conference play.

Colin Schooler needs 5 tackles to reach 400 for his career.

I thought that Erik Ezukanma had a terrific game last week despite not being heavily involved in the passing game. His ability to block is really a significant part of his game. Despite a down game he’s leading the Big 12 with 350 yards receiving.

The line has gone anywhere between starting at Texas -11.5 to -7.5 and is now at -9. That’s a pretty big swing. I jumped in when the line was -7.5 and feel pretty comfortable with that pick because I think Texas Tech is going to keep it close. I don’t think Texas’ offense is as good as advertised (i.e. not top 10) and I tend to think that Texas Tech is playing quite well despite the issues with SFA, which were largely self-inflicted. If Texas Tech cannot not shoot themselves in the foot with turnovers, then I tend to think that Texas Tech wins by 3 or so.