Florida International opened the season with a whipping of Long Island 48-10 and I would guess that LIU is just starting a football program because they’re getting thrown around quite often. FUI then lost in overtime to Texas State at home. The likely turning point in this game was that FIU lost 3 fumbles, while Texas State didnt have any turnovers.

Butch Davis is the head coach, a head coach at Miami and then North Carolina, while also an assistant coach with the Dallas Cowboys and Jimmy Johnson for so many years. I believe that while at North Carolina he was dismissed for some NCAA investigation regarding academic misconduct. While at Florida International, he has a record of 24-22 and had a winning season every year since 2017 except for last year where the Panthers went 0-5. In fact, in Davis’ first three years he went to 3 bowls in Conference USA, so he’s continued to win except for a weird Covid year last year.

Regarding the stats, I took out F+ and SP+ because I simply grew tired of them being released and them also being behind a paywall to an extent. The fact that we’ve got three very different models is enough for me to give you some variety. Interestingly, there’s a significant variance with how Sharp sees Texas Tech, but I’m still here for it. 2-0 baby.

Leading the FIU defense is Everett Withers, who has known Davis for a good chunk of his coaching career. Withers was the head coach at Texas State before they moved on from him in 2018 and prior to that he was at James Madison and at North Carolina, which is where they met. Withers was the head coach at James Madison and there were a lot of folks that thought that he’d be a terrific head coach, but sometimes it really depends on where you pick to be a head coach.

I’ll start with the Dames Brothers. That just sounds good, doesn’t it. Richard and Rishard Dames are both 5-11 and 185-pound or so defensive backs, Richard leads the team with 13 tackles, while Rishard had 8 tackles and 3 pass break-ups.

Matt Wells mentioned the two play-making linebackers, Jamal Gates (6-2/225) and Daniel Jackson (6-2/228), are 2nd and 3rd in tackles this early in the season, both have 2 tackles for a loss, Gates has a sack and Jackson has 2 thus far. Richard is the safety while Rishard is the cornerback.

Tevin Jones (6-4/220) is listed as a linebacker or defensive end, so he’s that hybrid position that probably has the sole responsibility of rushing the passer.

FIU’s struggles probably a result of lots of bend and a decent amount of break. That’s usually a bad combination. They are limiting big explosive drives, but on a play-by-play basis, they aren’t terribly efficient, the key for the Texas Tech offense is that they actually need to be efficient and pick at FIU more than anything else. I’d guess that you will be able to break big plays, but there’s going to be meat on that bone.

The Texas Tech defense is sort of doing exactly what Keith Patterson wants them to do, which is limit big plays and stop the run. Even the pass defense isn’t bad thus far in the season.

The offense is led by Andrew Breiner who looks barely old enough to buy a beer but has been coaching for 15 years. Breiner comes from the Joe Moorhead coaching tree, which is a really interesting offense to me, and had spent 7 years with Moorhead at UConn, Mississippi State, and Fordham (Moorhead was the head coach at Moorhead).

This is a fantastic primer on what the Moorhead offense is, the idea is that you can probably look for 12, 20, and 11 personnel only, with running out of 11 personnel 90% of the time.

Max Bortenschlager (6-3/205) is the senior quarterback, completing 61% of his passes for about 263 yards a game with 4 touchdowns 1 1 interception. Bortenschlager is chunking the ball down the field, averaging 10 yards an attempt thus far on the season, which makes some sense given the success of the running game.

Speaking of the running game, D’Vonte Price (6-2/215) is the main threat running the ball, averaging 138 yards a game running the ball and about 10 yards a carry and 3 touchdowns. Those are video game stats, but he’s actually doing it not in video games and the key here is that Price ran 5 times for 165 yards against Long Island for 33 yards a run, and then a more human 23 times for 111 yards against Texas State. Shaun Peterson, Jr. (6-3/215) is his main back-up and he’s obviously also big.

Bryce Singleton (5-11/193) and Tyrese Chambers (6-1/200) are the starting receivers, Singleton has 8 catches for 168 yards and 21 yards a catch, while Chambers has 7 catches for 146 yards and 2 touchdowns. To go ahead and answer the question, yes, Singleton had 149 yards receiving against LIU and 19 against Texas State, while Chambers has been more consistent, 3 for 67 against LIU and 4 for 79 for Texas State. Rivaldo Fairweather (6-4/245) is a great name for a soaps character, but he’s also the FIU tight end freshman and he is a threat, 5 catches for 74 yards and a touchdown. He actually caught 4 passes against Texas State and could see him as a definite outlet when under pressure.

The LIU game has really swayed the actual stats and make FIU to be a really terrific offensive team, but the advanced don’t love them as much. On a play-by-play basis, they are good, but they aren’t punching the ball into the endzone, have way too many negative plays and aren’t particularly efficient at passing or running the ball. Explosive plays? Yes, but my guess is that’s largely because of LIU.

Let’s rattle through the special teams quickly. Tommy Heatherly averages 45 yards a punt and has 7 on the year, 3 inside the 20. Chase Gabriel has made all 3 of his field goals, the longest was 45 yards, so he’s got a bit of range. Singleton is the main punt returning and is very good, averaging 10 yards a return. Joseph Lexigton (5-9/185) is the kick returner, but only averages 17 yards per return.

For Texas Tech, it’s just one big mistake that ends up costing the special teams significantly. A botched onside kick recovery or a punt return gone wrong. I think at this point I’m just hoping that nothing goes wrong. That’s all I’m sort of wanting this game.

As far as injuries are concerned, I think that FIU’s receiver Shemar Thornton is out and Texas Tech’s running back SaRoderick Thompson hasn’t had any sort of update.

Uniform Update: It is all undefeated right now. 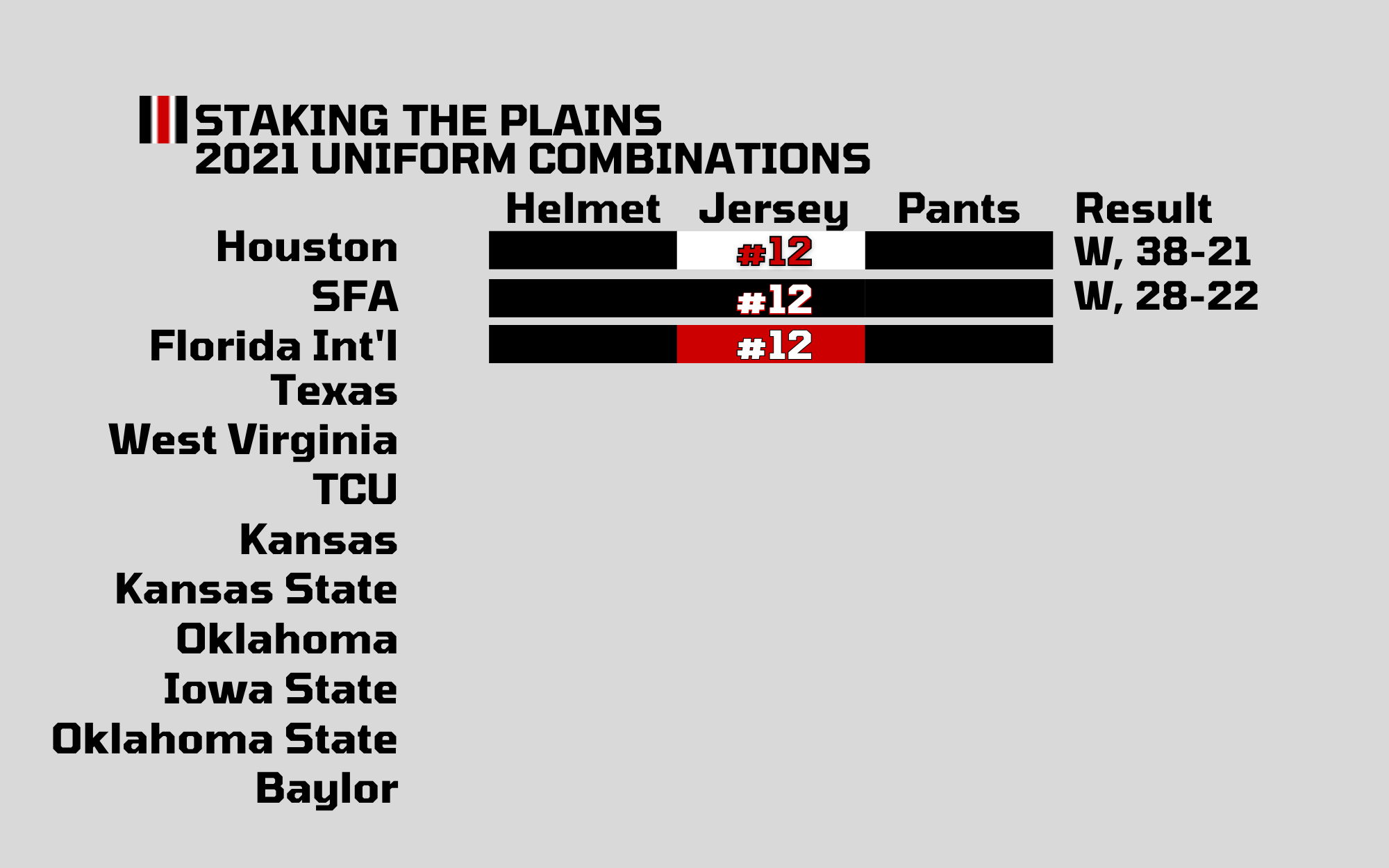 SFA Position Ratings: You probably thought I would forget about the position ratings. Well, I almost did, but never fear, I did get them done late last night.

Texas Tech QB Tyler Shough happens to be 1) a Division I student-athlete and 2) going through his, along with his family, own experience with breast cancer with his mother.

“My mom is a 16-year breast cancer survivor – stage four,” Shough said. “Really the Lord has been the driving factor in her life so that’s where I get my inspiration. Once I got to college my relationship with God strengthened.”

Shough said it’s a never-ending process for him to get closer to Jesus. He plays and lives for his parents and God.

KEY STORYLINES
FIU
The Panthers are trying to bounce back from an 0-5 season in 2020, after three straight bowl seasons from 2017-19, which included a pair of second-place finishes in the Conference USA’s East Division. Head coach Butch Davis probably has time to put the program back on track, and with the majority of last year’s starters coming back, Davis has good talent to work with. But, he has to contend with the fact that his Panthers are 7-13 since the start of the 2020 season. Max Bortenschlager looks like a solid starter at quarterback, and several transfers have bolstered the overall roster.

After last week’s weird performance, Texas Tech has to get the machine going.

It’ll win, and this will mostly be about trying to tighten everything up, but the team has three road games in four weeks right after this starting with a date at Texas.

FIU is an almost perfect team to play in the third game. It’s going to bring enough pass rush to throw something big at the Red Raider O, and it’s going to turn the ball over enough to spoil any hope at an upset.

What’s at stake?
Texas Tech has now been the victor of two close games — one that built momentum and excitement, and another that seemed to deflate it. The Red Raiders victory against Houston developed a sense that this team was as good as advertised. The six-point win over Stephen F. Austin at home brought fans back down to earth. It’s time for the Red Raiders to figure out who they are, and then prove it. There have been talented individual performances on both sides of the ball and plenty of reason for optimism. In their last non-conference game of the year, the Red Raiders needs to iron out the wrinkles and find themselves.

Florida International took a talented Texas State team to overtime just last week. The Panthers don’t jump off the schedule as a team that presents a huge threat, but neither did Stephen F. Austin. There’s plenty of talent on their roster that Texas Tech needs to be prepared come Saturday.

With the line being at 20.5, I think that’s a bit much until such time that Texas Tech can show me that they can score points. Lots of points. I could see this being a 40-21 sort of game. I’d also add that I missed both bets last week, taking Texas Tech and taking the over. For some reason, I thought that 50 points seemed really low. The current over/under line sits at 54 or so and I’m tempted to take the over because I think this will be a more offensive game (c’mon, I’ve taken the over).