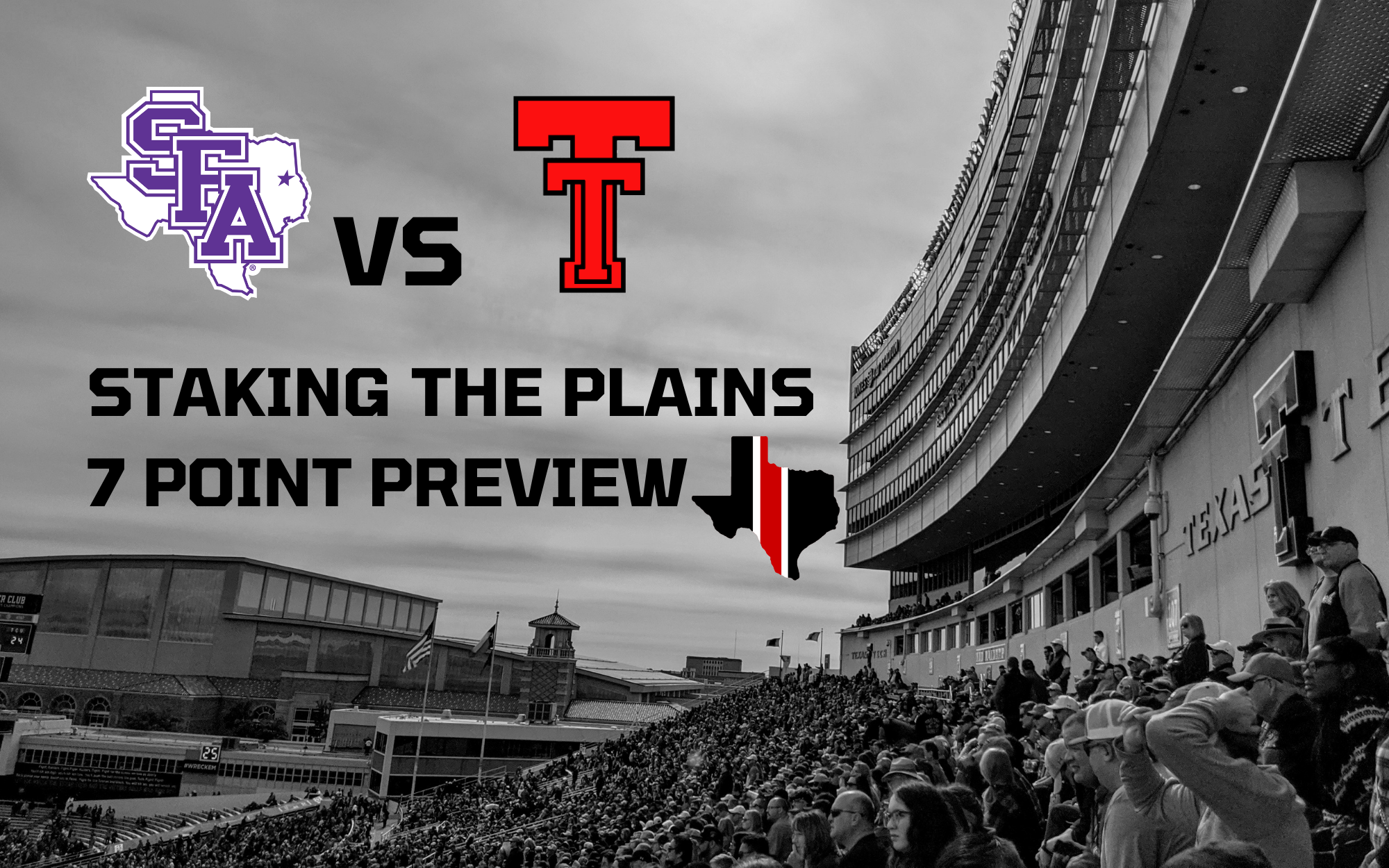 I can’t do stats for SFA because they aren’t Division I, but you can get a look as to where Texas Tech is progressing after what is likely a really nice week 1 win over a good opponent.

SFA had a game similar to Texas Tech’s win over Houston against Tarleton State in that they were down 10-0 before scoring 20 unanswered points for a 20-10 win. I can go ahead and mention here that SFA’s head coach is Colby Carthel and is in his second year. Carthel is originally from Friona, just northwest of Lubbock, played college ball at Angelo State and West Texas A&M. He’s risen through the FCS ranks, starting out at Abilene Christian, then West Texas A&M, then Texas A&M-Commerce, and arriving in Nacogdoches in 2018. He has 3 sons: Major, Bear, and Stone, which is absolutely awesome.

I think it is important to mention that all of these coaches have won awards and championships. The two coordinators and Carthel have won a championship at TAMU-Commerce and that’s really impressive. To win a coordinator of the year by FootballScoop, something both coordinators have done, is probably pretty difficult, just given the number of NAIA or small school coordinators out there. These guys can coach, so I’ll be interested to see how what they do to try to trip up Texas Tech.

Scott Power is the defensive Coordinator, originally from Indiana and playing at IUPUI. Power got his start coaching high school in Indiana, then moved his way through some smaller colleges, Wartburg College and Marian University and Storm also met Carthel at TAMU-Commerce where he was the defensive coordinator there in 2018 before coming along with Carthel to SFA. And I’d also add that Storm was the FootballScoop NAIA coordinator of the year in 2014 while at Marian University, so he’s doing something right.

Last week, linebacker Bert Morris (6-1/224) had the best day of the two linebackers last weekend with 5 tackles and 1 tackle for a loss, but they only play two linebackers, the other being Brevin Randle (5-11/228) who had 4 tackles last week.

This is probably Division I size, but the hope that it is not Division I skill. The tackles are a nice size and Texas Tech’s offensive tackles had real issues with Houston’s speed rush, which was incredibly problematic for Tyler Shough. When he has time, it’s generally pretty darned good. The secondary for SFA isn’t necessarily small, but Texas Tech should have a size advantage over SFA on the cornerbacks. It was interesting that the secondary made so many plays. I was also a bit surprised that the linebackers didn’t make more plays

The SFA offense starts with quarterback Trae Self (6-4/200) who went 18 of 16 last week for 235 yards and 1 touchdown. Self can also run, he’s got wheels, running 12 times for 56 yards. Self played at North Richland Hills in high school and then at Butler.

Wells mentioned that the line is huge and that’s partly true, or 4/5ths true. The two tackles run 276 and 333, while the two guards run 300 and 325 and according to the depth chart, the center weighs 235. I check and double-checked that to make sure it was true and that’s what the roster says. It sounds insane, but he’s probably really mobile.

Obviously, I think the defensive line should eat quite well on Sunday. I’m interested as heck to see a 235 center or to know if the roster is incorrect. That’s basically Riko Jeffers playing center and although he’s a big guy, that’s going to get mauled inside. My other guess is that the linebackers will continue to blitz. Self was turnover prone at the JUCO level and that’s a pretty difficult thing to shake. My hope is that forcing some passes might create a repeat of last week.

One other thing to note in the secondary is that there were no deep throws completed. I don’t really remember Tune throwing the ball deep, which may be his fault or it may be the receivers or it may be the secondary simply playing better and covering receivers. Let’s let the season play out a little bit, but all of those things could be true.

Punter Max Quick averaged 48 on 4 punts on Saturday, which is outstanding. Kicker Chris Campos made both of his field goals, one each from 22 & 43. Jeremia Walker is the kicker returner and Wells made a point to mention him as a person to watch.

I am encouraged by the fact that both field goals were made by Jonathan Garibay and also happy to see Trey Wolff kick the ball into the end zone multiple times on kickoffs. Also nice to see Austin McNamara average 46 yards a punt. What wasn’t nice was the coverage and return teams. Not exactly great. There was a nice punt return from McLane Mannix, but the inability to recover an onside kick is not something that Texas Tech will be able to recover from on a regular basis.

For Texas Tech, SaRodorick was cleared to practice with full contact, but that’s probably the only injury situation I’m aware of for the Red Raiders. I don’t know that I’ll be able to find out much on any sort of injury situation with SFA, but my guess is that this early in the year, everyone is relatively healthy.

Here’s your uniform combinations thus far. Didn’t have time to do it last week, but this is something I love to track. It doesn’t mean anything, it’s just fun. You can click on the image to embiggen. 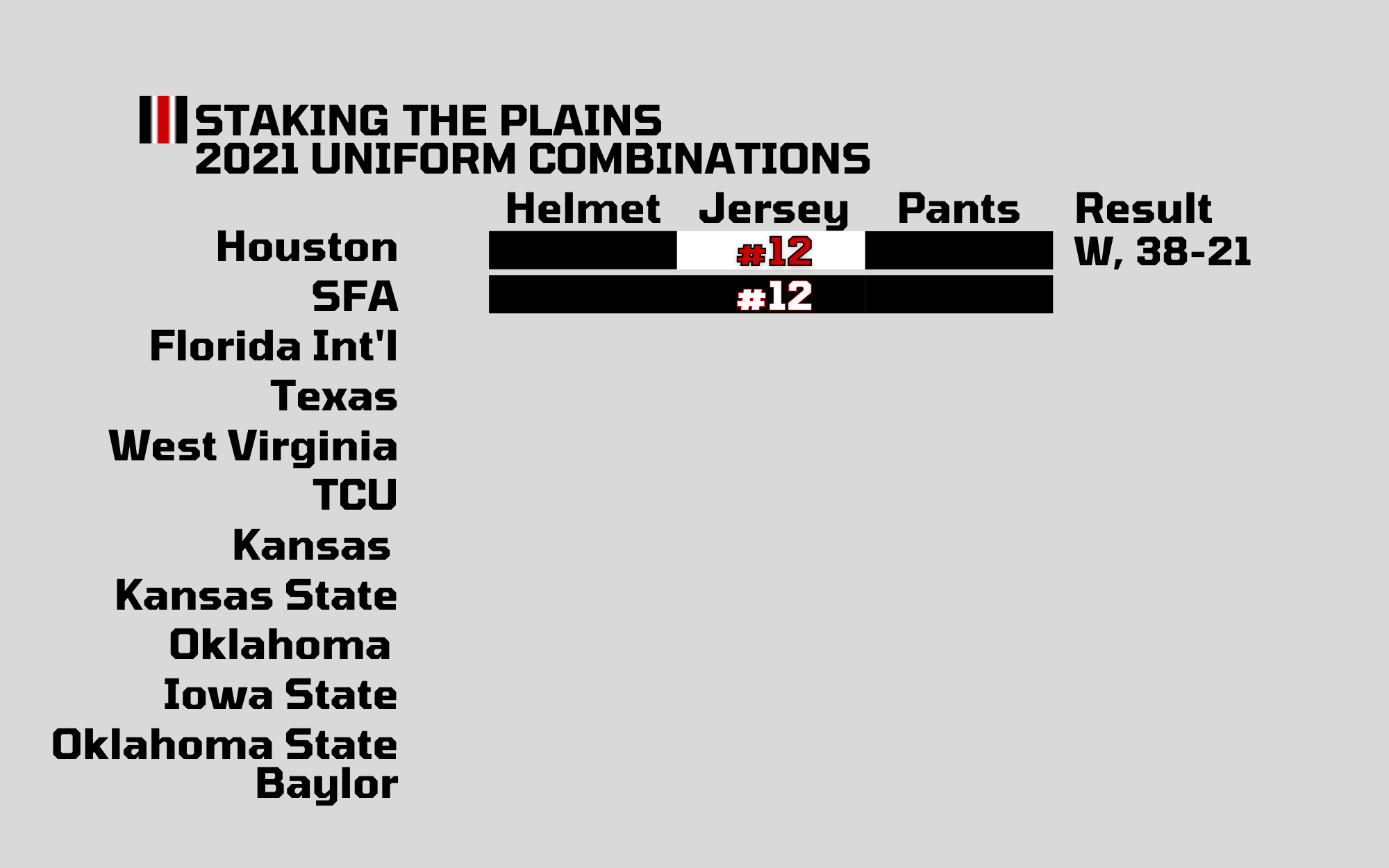 Ball hawk
Redshirt sophomore Bruce Harmon is a defensive back who continues to show a lot of promise. He finished his 2020 season with three interceptions and four pass breakups. Harmon wasted no time getting the ball rolling in his 2021 campaign either. Harmon finished the Week 1 game against Tarleton State with six total tackles, two pass breakups, and an interception. As Texas Tech quarterback Tyler Shough continues to get comfortable in his new system, he’ll have to exercise caution when throwing the direction of Harmon.

Dallas Morning News’ Ryan Mainville | Texas Tech prediction: Can the Red Raiders get off to a fast start against Stephen F. Austin?

This will end up being a long night for SFA. Texas Tech is coming off a high after the Houston game and fans shouldn’t expect a letdown. SFA’s last Big 12 opponent was Baylor, a 56-17 loss in the 2019 season opener. The Red Raiders proved against Houston that their talent level from last season has improved. Saturday’s game represents an opportunity for Texas Tech to take control early and give its second- and third-string players some valuable playing time. SFA should score some points late in the game, but don’t expect this to be a close game. Historically, it hasn’t been.

I’m excited to see what Texas Tech can do with what should be an opponent that they should pretty well dominate. No line has been released, which is a bit surprising, but not terribly. On games like this where it is likely lopsided, I think you start at a team as a 30 point favorite so ask if you’d pick Texas Tech to win by 30+ points and go from there. If last week was any indication, then this team should win 45 to 14 or 10 or something to that effect. If that sort of difference doesn’t happen, then you should be worried. The same way you were worried when Texas Tech struggled against Houston Baptist. Whatever you do, don’t brush off deficiencies as mere coincidences, but as actual issues.

One other note, which is that I chose the “Action Network” betting app (this is a link to the website, but there’s an app as well) to keep track of my bets and right now, I’m 2-0, have won a 1.93 units as I took Texas Tech and once Texas Tech became the underdog, I hammered that moneyline. If you want to look me up and “follow” me, you can just find me under my name, Seth Jungman. If you want to follow someone with some juice, then follow Kyle Jacobson, Rob Breaux, Michael McDonald, Spencer Rogers, and Brian DonCarlos. They’re betting units like there’s no tomorrow.