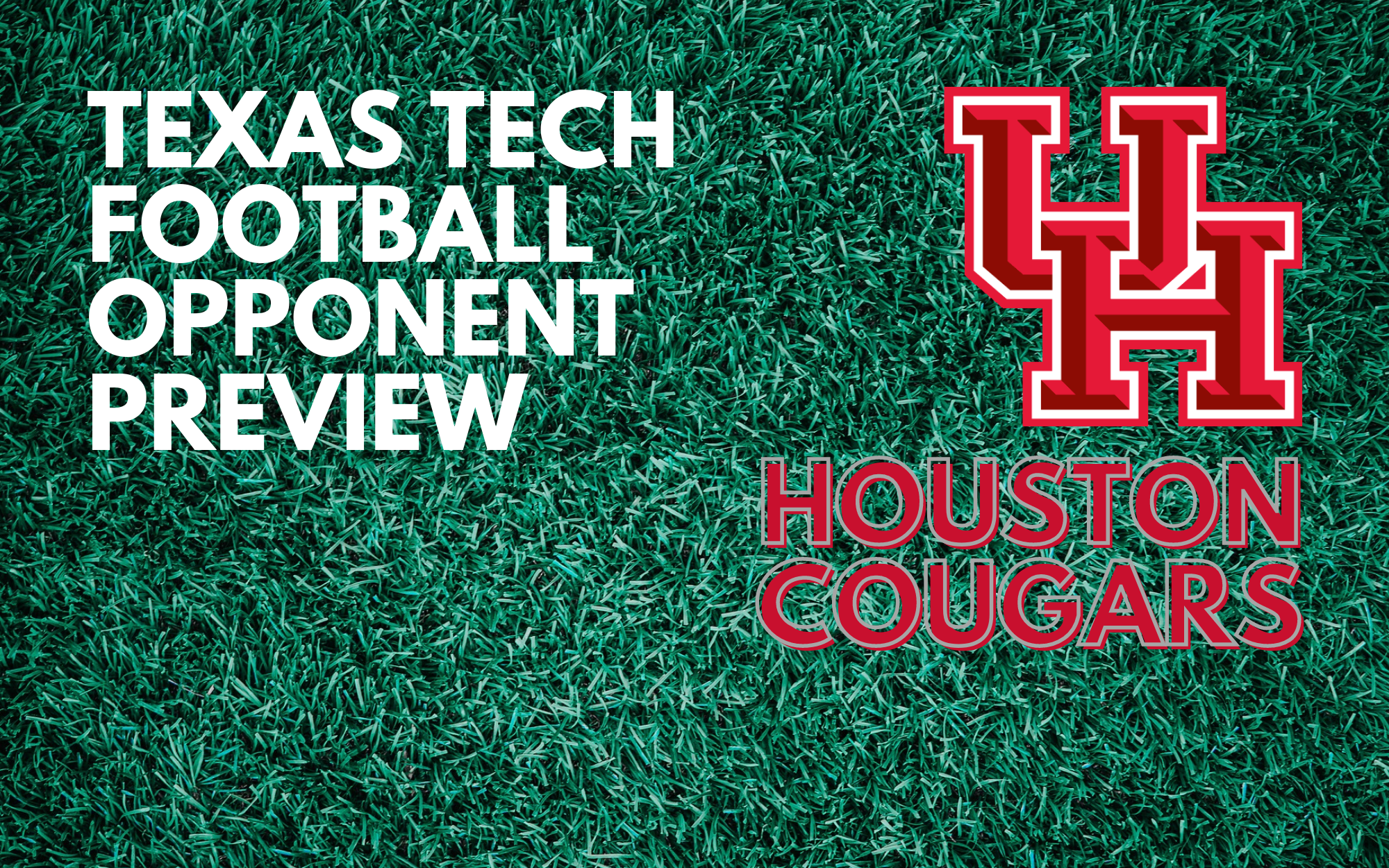 We ready for some previews? Heck yes we are. These previews are a bit more sparse, not sure if that’s a good word, but I think full of detail about what the team was last year. I’ll interject my own two cents. Before we get too far into things, here’s links to the resources used: 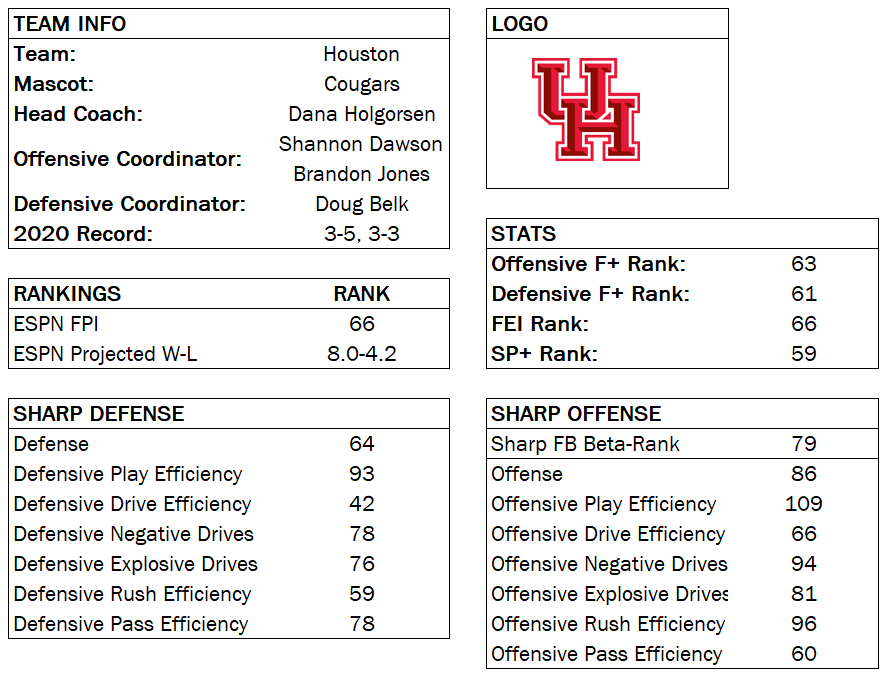 The stats are pretty clear that Houston wasn’t a very good team last year. In fact, they pretty well under-performed I think. As far as the projections for next year, ESPN thinks they are the 66th best team and will be 8-4 in 2021. Football Outsiders F+ and SP+ ranks are similar in that they think that the Cougars are the 3rd best team and middling in terms of offense and defense. And Sharp Football thinks they will be the 79th best team, again, not really all that good, the offense taking a pretty big dip and the defense being middling as well. If you’re a Cougars fan, this isn’t encouraging. 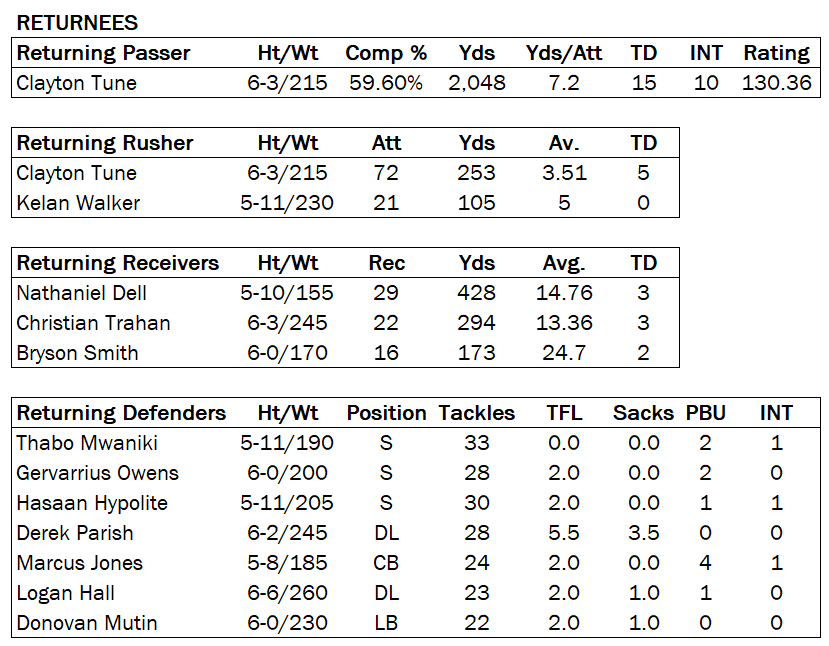 Tune is the guy that Holgorsen has anointed as being the offensive leader of the team. Obviously a bit dual-threat for sure, in fact the leading returning rusher for Houston. Regardless, Houston graduated a ton of offensive talent, players both rushing the ball and catching the ball. Defensively, Houston appears to be stronger at the safety spot as Mwaniki, Owens, and Hypolite are all quality players. I believe that Jones is well thought of as a cornerback. Houston also graduated a ton of talent at the defensive line and linebacker.

NOTE: I was running through the seniors on CFBStats and just sort of thought to myself that I don’t need to worry about the seniors because they graduated. Then I remember that last year was a Covid year, so there are actually seniors who were returning for yet another year. So I tried to cross reference the roster and CFBStats and found a few players that should have been included. And by the time I realized it, I had already moved on to Florida International so I couldn’t update the spreadsheet because, well, just because. Here are those players who should have been included. 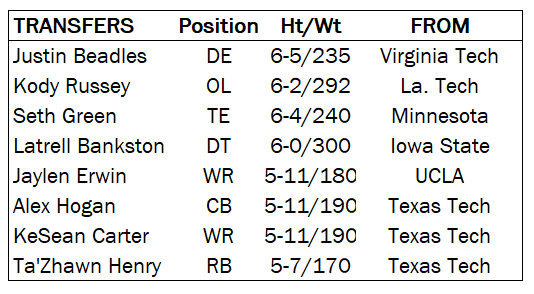 These transfers were found on the 24/7 Sports transfer page, so if there are some that are missing, that’s why. It’s difficult to find accurate resources sometimes. Every team has transfers nowadays and with three of them from Texas Tech, we know a bit more about them than most. Hogan is the least of my worries, Carter being a player I absolutely loved, and Henry being a change-of-pace back, but is likely to get quite a few carries for Houston for sure. Russey earned some all-conference honors, so he’s better than just-a-guy. Green caught a few passes for the Gophers, so he’ll probably see a few catches, but maybe won’t be the main tight end. Bankston is also decent, had 16 tackles for ISU and 3.5 sacks. Erwin caught 32 passes for UCLA in 2019, but then just 1 last year (not sure if injury), but the point is that he can be very good and productive. And to remind you, Carter caught 30 passes last year for 290 yards.