It’s the offseason and we’ve got a good month or so to take a look at some things so that we can maybe figure out what things will look like in the fall.

I decided to dig a bit deeper in the Texas Tech and TCU offenses from last year. I know there are some caveats, namely that Sonny Cumbie was likely handcuffed a bit by Gary Patterson. That’s allegedly one of the reasons he maybe looked elsewhere (his contract wasn’t renewed) or was asked to look elsewhere.

I think that’s probably a relationship that had run its course and there was probably some friction on both sides. With that being said . . .

I did a little bit of research. 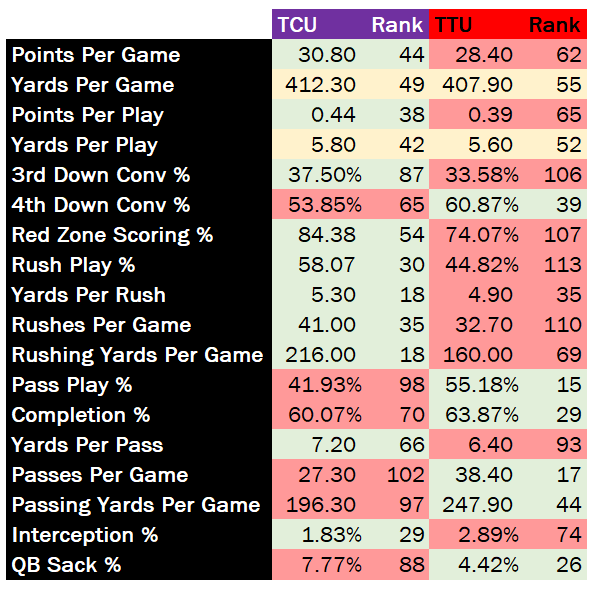 For clarification, the green means that one team had the advantage over the other, while the yellow means that the two teams were within 10 spots of each other.

The first thing that probably jumps off the page, just because of those holiday colors, is that despite the idea that Gary Patterson was holding Cumbie back, the Horned Frogs largely out-performed Texas Tech on most categories. Texas Tech’s advantage comes on the passing statistics, but not all statistics are something that’s necessarily an advantage.

Pass play percentage is a difference of philosophy, David Yost passed more than Cumbie and Yost’s offenses completed a higher percentage of passes, but Cumbie has always liked to air it out and has the higher yards per pass. Only 200 or so yards passing a game may be tough to stomach, but I don’t know that Cumbie will run the exact same thing that he did at TCU, so those numbers may climb up.

The other key stats are the interception percentage, which favored TCU and Cumbie, while TCU took a ton more sacks. I think holding onto the ball and trying to get the ball down the field more will lead to more sacks, while Texas Tech probably employed more short passes, but obviously maybe not as effective.

Where TCU really shined over Texas Tech were the overall stats, having advantages on the first 5 stats, although the yards per game and yards per play were barely better than Texas Tech’s, but TCU had a significantly better red zone scoring percentage.

Well, I hope that Texas Tech has a more efficient and a better running game. A large part of TCU’s running success was their running quarterback, to be exact, 24.5% was the result of the TCU quarterback running the ball which led the team. Regardless, the fact that TCU was able to run effectively made them a better overall offense.

I do tend to think that Cumbie will be more downfield than Yost was and he has a quarterback with a stronger arm that is more capable of doing that. I’m also more appreciative of the lower interception rate, my guess is that going down the field and going over the middle can yield different results.

Maybe the biggest thing is the red zone scoring. Texas Tech was 107th in red zone scoring, a high frustration point for a lot of Texas Tech fans and if Texas Tech can improve that, I think that makes a ton of difference. I’d also add that the third down conversion rates aren’t great for either team and that’s also something that I think needs improvement.

Wells and Cumbie have both said that the 2021 version of the Texas Tech offense won’t be TCU’s offense and won’t be former iterations of Texas Tech’s offense, but Cumbie’s own creation. I do think Cumbie will be a bit more free-wheeling than he was at TCU, but we’ll see.