Mercury News’ Jon Wilner gets into some detail regarding the UCLA and Cal deals and there were two things that stood out to me.

In addition, multiple sources told the Hotline that Learfield/IMG College— the most influential marketing company in college sports — is expected to ask the Bears and Bruins to revise, if not terminate, multi-million sponsorship agreements.

Under Armour is a publicly traded company whose stock price has fallen from $43 per share at the time of the deals with Cal and UCLA to $9 per share currently. It reportedly has delayed payments to some of the professional athletes in its portfolio.

Learfield/IMG College is a private holding that has instituted furloughs and salary cuts and is struggling to pay marketing fees to its clients.

That’s significant because Learfield IMG College is the official multimedia rights holder for Texas Tech and Learfield represents over 130 college institutions. If they are struggling, that’s kind of a big deal.

2. Under Armour does have a contract with Utah and Under Armour is just paying $1.15 million per year, which is on par with what Texas Tech is receiving:

Then again, Under Armour’s contract with the Utes requires an annual rights fee payment to the school of just $1.15 million — one-third of its annual obligation to Cal and an order-of-magnitude less than it pays UCLA.

Texas Tech is receiving $2.25 million per year. It would make sense that Under Armour is trying to reset the market.

Now to California. You may not be able to click on this, but I’ll blockquote the relevant part (it’s worked for me), Financial Times’ Sara Germano reported that Under Armour has also now officially terminated their deal with California and South Carolina has reached out to Under Armour, but have not heard back from them.

Do I still think that Texas Tech is on solid footing regarding their contract?

This could be fun, depending on what you consider fun and your level of fun, but SI’s Pat Forde is bored and is proposing/wishing for a complete realignment of everything, including 120 teams and 10 conferences and you basically play a round-robin schedule in basketball and baseball and all 11 opponents in football.

Here’s Forde’s proposal (you can click on the image to embiggen). 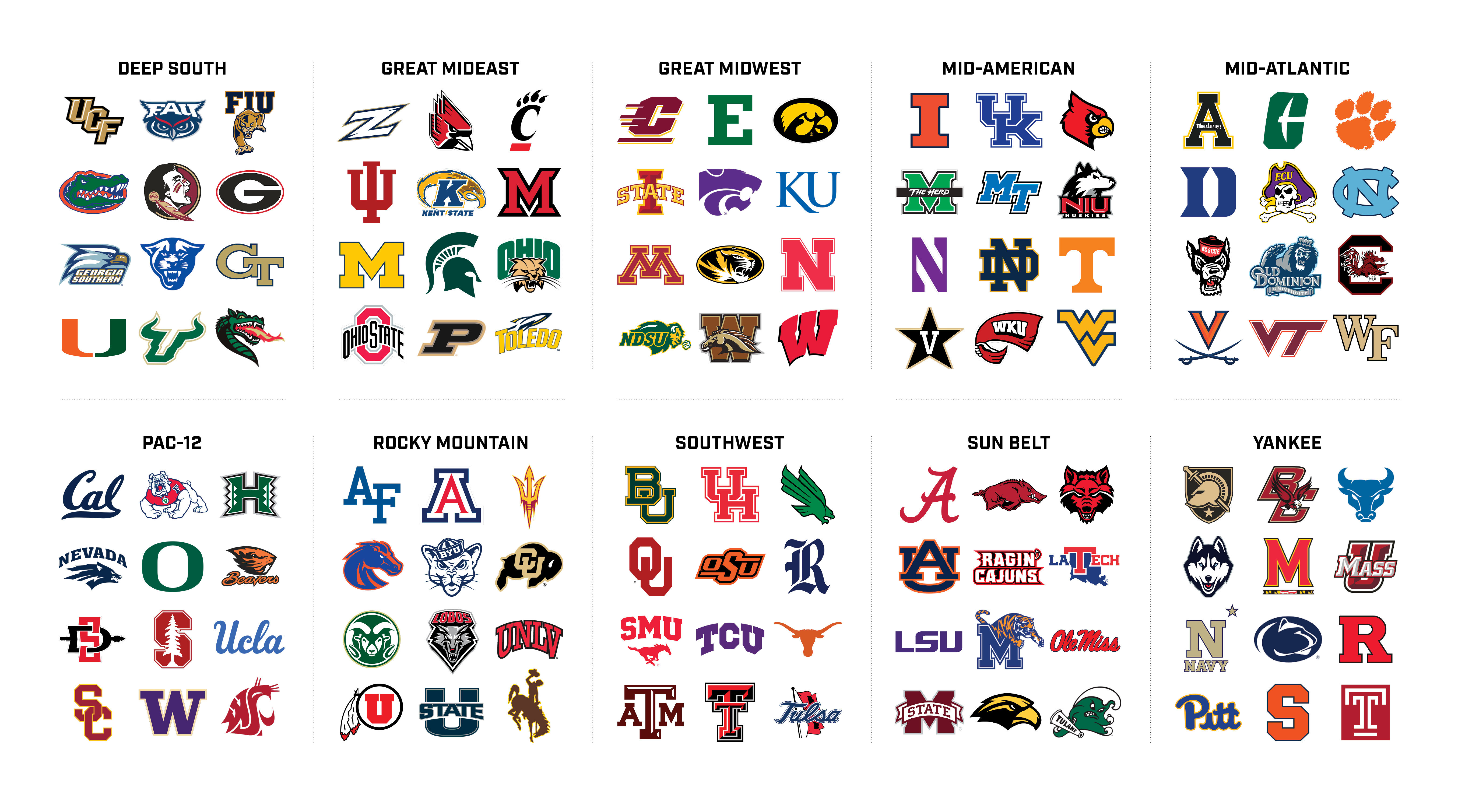 Personally, I’d be absolutely fine with this and is reminiscent of the old Southwest Conference with the addition of North Texas, Tulsa, Oklahoma, and Oklahoma State. I like regional games and think that’s better for the sport overall. There are supposed “gimmie” games in every conference so it’s not as if one conference has an advantage over another.

Forde is realistic about the downside to this sort of deal.

The biggest sticking point of the conference breakup is this: The Power 5 schools would have to share with the non-P5 schools, and that goes against every money-grubbing, power-consolidating principle they have come to espouse. When you have every advantage, giving some of them up is counterintuitive. The schools with clout would use that clout to stop it from happening. Staggering revenue shares based on competitive success is one option that could make the deal more palatable to the establishment schools.

(That list of schools would include Notre Dame. There’s no way the Fighting Irish will willingly give up independence to join a conference alongside Western Kentucky, Middle Tennessee and Marshall. But in this model, they have to go somewhere to maintain FBS membership. They are a better overall profile fit with the Mid-Atlantic or Yankee Conference, but for geography’s sake, they are where they are. At least they have Northwestern and Vanderbilt for academically elite, private-school company.)

The TV networks wouldn’t much like it, either. (For one thing, some of them would have to change their names.) There is a reason why so many Sun Belt and Mid-American Conference games are played midweek, and why other leagues are fighting for airtime on off-brand networks—those programs don’t do big ratings. So the idea of liberally sprinkling them in with the glam schools from the glam leagues, instead of keeping them in their corner of the FBS universe, would not be well received.

Baseball America has their too early top 25 and even though Texas Tech has lost a hanful of players to the draft, they are expected to be the #2 team in the nation headed into next year.

It was fun catching up with former @Rockies pitcher Chad Bettis this afternoon.

The former @TTU_Baseball & @plainsmenball pitcher announced late last week he was retiring after seven seasons in the majors. pic.twitter.com/7pgAJ61ED6

Brooke Kanas has been named to the All-Big 12 Preseason Team! 🙌

Congratulations, @BrookeKanas! We are excited to see what this season brings!

For the fifth-consecutive year, we have 3️⃣ @WGCAGOLF Academic All-American Scholars!

Congratulations to Amy, Anna and Gala! 📚

This week on Meet the Lady Raiders, get to know junior @jadawalton14‼️🤩