Let’s be on the compounding interest part.

One of the things that I’ve been thinking about is recruiting. Not necessarily the current state of things, which is fine, but historically, where Texas Tech has been from a recruiting standpoint over the past few years. One of the biggest reasons that a coach will get fired is if the recruiting falls off a cliff, or a Kliff.

I picked up the Pick Six Previews: 2020 Season Preview earlier this week and it’s good from a standpoint of getting a good overview of the conference and the nation. I recommend the download for sure.

One of the things that’s discussed is the recruiting trend for the past 10 years. And well, it’s a bit depressing. 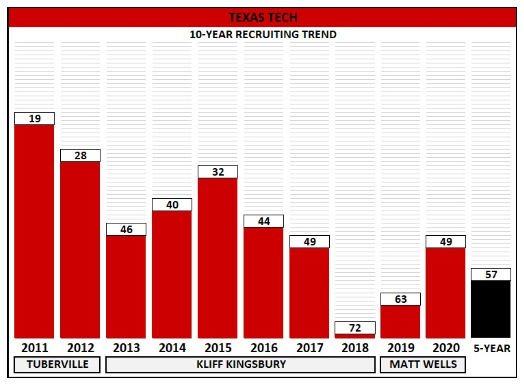 What you sort of see here is maybe Kliff Kingsbury benefiting off of some pretty fantastic recruiting classes from Tommy Tuberville. If Tuberville did anything, it’s recruit his ass off and you can say whatever about him as a coach, from a recruiting perspective, he made things happen.

And then Kingsbury seemingly ticked upward with his recruiting average for the first three years, but then, something strange happened. Keep in mind that Kingsbury peaked in the 2015 class, which he would have recruited during the 2014 season. That 2014 season, Texas Tech went 4-8, so it wasn’t great Bob. The 2016 class was for the 2015 season and Texas Tech went 7-6, Patrick Mahomes was a sophomore and showing the world his superpowers. Kingsbury’s recruiting should have been at all all-time high with what the team was doing. But instead, the recruiting average dropped 12 spots, from 32 for the 2015 class to 44 in the 2016 class.

In Mahomes junior year, which he should have been showcasing what he could do with Mahomes, the 2017 class in the 2016 season dropped 5 more spots to 49. That 2016 season with an all-world quarterback couldn’t grab a top 50 class. Things spiraled after that, very quickly and Kingsbury’s last class was a heave from the baseline that only made it to halfcourt.

The 2019 class is one of those in-between classes, all signed under Wells, but recruited by Kingsbury during his last season of 2018. Wells made a pretty big jump in his 2020 class, from 63 to 49 and we await the results of the 2021 class.

The thing that struck me about recruiting classes is that when things are going well, it’s like making the minimum payment on your credit card. Just the idea of pulling yourself out of the rut of making that minimum payment and the only real way to make headway is to make significant payments on a consistent basis and to stop using that credit card.

It’s why programs who fall of find it so difficult to get back to any semblance of winning. You have to make significant payments AND no longer use what you’ve been using before.

But when you win, the recruiting also feeds off of itself. Chris Beard and Tim Tadlock are certainly experiencing the effects of recruiting well and winning and very high rates. They still work hard and they are making their own deposits to add to the total, but the program, in a sense, works for itself.

This isn’t a post that is intended to make you feel sorry for Wells. I think he’s making headway. But rather, to maybe consider how difficult it is to pull a team out of the hole that it fell. I do think that Wells is paying down the debt, getting back to even and if his development of players is anywhere close to what Beard and Tadlock are, then he can start earning some interest on the program’s success.