Earlier this week, I projected what I thought that the overall offense would look like, a hopeful projection of 5,700 total yards, 2,200 yards rushing and 3,400 passing. I took the top five receivers from Texas Tech, and the two years that offensive coordinator David Yost was at Utah State to get an average of the top receivers and their overall performance.

The other thing is that the 2017 Utah State offense really drug down the offense overall in both the WR 1 and WR 2. The other interesting thing is that Texas Tech’s #1 wide receiver wasn’t dominant, but the average per catch was significant, there wasn’t just enough of it. And the second receiver spot is pretty well spot-on in that you can almost expect about 3.5 catches a game from that one spot. 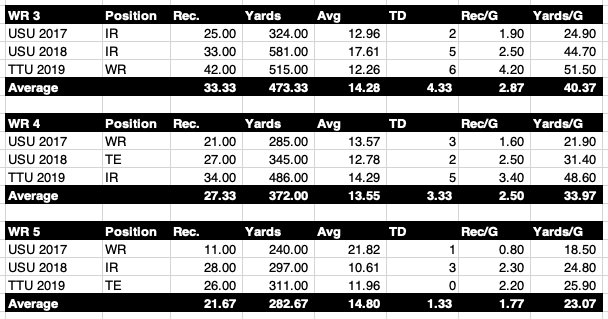