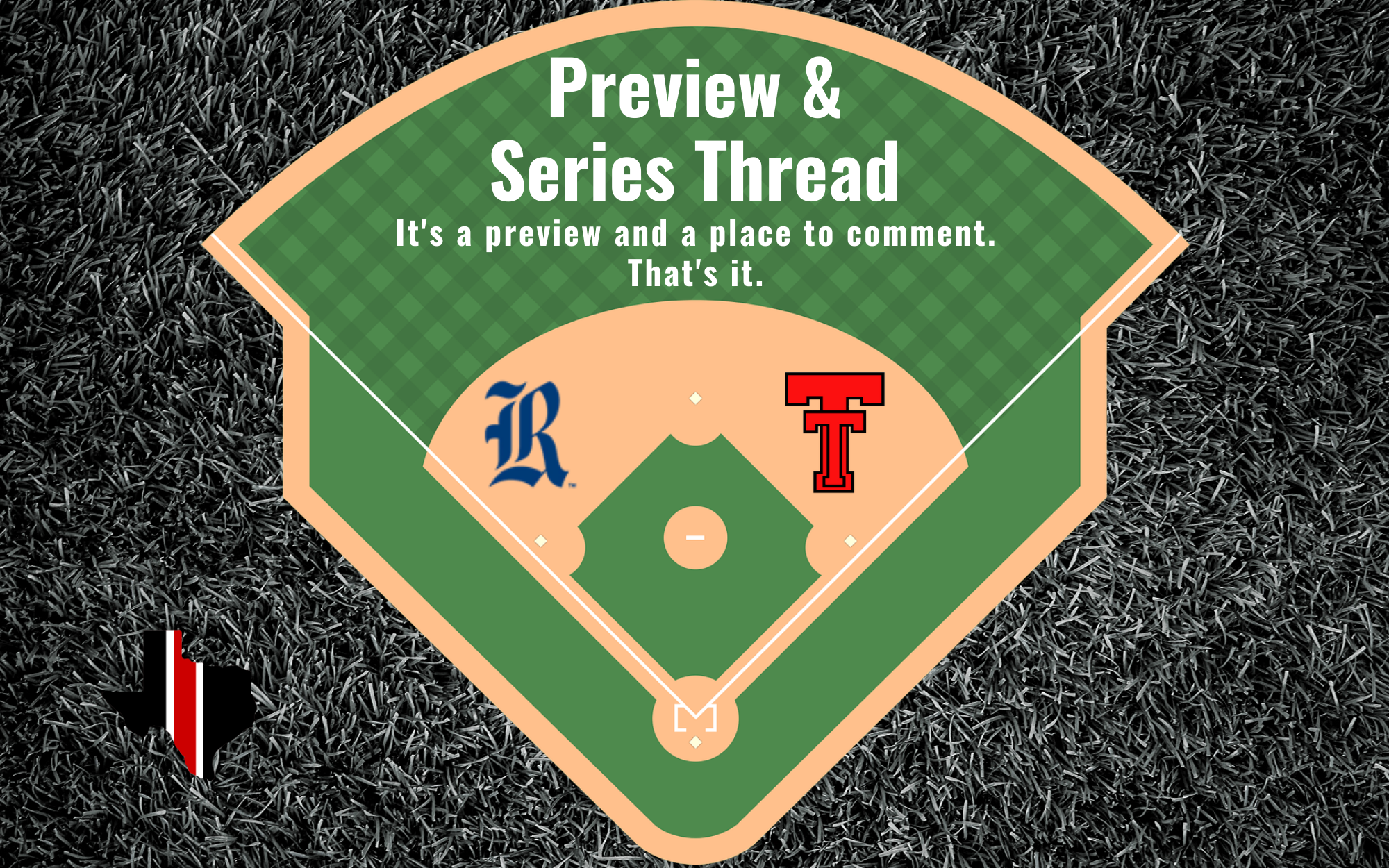 Home for the Owls.

Hello humans. Rice has had a rough go at things to start the year. They lost the series to Texas in Houston to start the year, all three games to UC Irvine, a mid-week game to Texas State, and then lost 2 of 3 to baseball powerhouse Missouri State. The Owls then lost to Louisiana on Tuesday and to Houston on Wednesday. This is not the Houston that you grew up thinking was a dominant baseball program.

Texas Tech, meanwhile, is on an absolute tear. They’re hitting .339 as a team, which is 1st in the Big 12 and the closest next team being Oklahoma State at .298, 1st in slugging, and 1st in on-base percentage, by wide margins. Oh, and they’re also stealing bases, 2nd in the Big 12 with 26 . The Red Raiders are 4th in ERA and leading the Big 12 with 165 strikeouts.

One other big note is that I’m going to be out of town this weekend so I won’t be able to update this post until Sunday at some point.

Avalanche-Journal’s Carlos Silva, Jr. – Preparing for greatness: No. 2 Red Raiders eager to get back on field, take on Rice:

Following a mid-week sweep, Texas Tech will look to continue its winning ways when it welcomes former Southwest Conference for Rice for a three-game set, starting with a 6:30 p.m. Friday contest at Dan Law Field at Rip Griffin Park. The two team will also play at 3 p.m. Saturday and conclude the series at 11:30 a.m. Sunday.

It marks the first time the Owls have traveled to Lubbock time since 1999.

“Rhythm and timing is definitely something that we’re all hunting,” said Tadlock, who’s two wins away from 300 during his time with the Red Raiders. “We’re trying to do the best job we can on both sides of it. Every time all these guys get out there should help.”

Texas Tech is coming off a pair of wins in which it outscored UNLV 22-5 in two midweek contests. Both games also saw starters Mason Montgomery (3-0) and Hunter Dobbins (2-0) pitched five innings or more in the triumphs.

“Just a lot of value in it,” Tadlock said of the midweek. “Really in the last two days and be able to run both starters out there in Mason (Montgomery) and Hunter (Dobbins). Get those guys out of the bullpen some work. … There’s a lot of value in that.”

Redshirt sophomore Clayton Beeter struck out 12 through six innings of work as No. 2 Texas Tech baseball picked up its 10th win in a row with a 7-1 victory over Rice on Friday night in front of a sold out crowd at Dan Law Field at Rip Griffin Park.

The Red Raiders opened the scoring in the first off back-to-back doubles from sophomore Cole Stilwell and freshman Jace Jung to take an early 2-0 lead. The Owls (2-11) fought back with a run in the third, but the Red Raiders answered with a run in the home half of the frame and further widened the gap with one in the sixth and three in the seventh.

Dug ourselves a hole, but got out of it.

No. 2 Texas Tech baseball stormed back from an 8-1 deficit to secure the series win over Rice with a 19-12 victory in front of a second-straight sold out crowd at Dan Law Field at Rip Griffin Park.

It marks the 11th straight win for the Red Raiders (15-1) and win No. 300 for head coach Tim Tadlock in his time at Tech. He becomes the third Tech coach to reach the milestone, joining Larry Hays and Kal Segrist.

Never out of it.

Pinch hitter T.J. Rumfield drilled a walk-off double to left field in the bottom of the 11th to cap off a late rally as No. 2 Texas Tech baseball outlasted Rice with a 7-6 victory Sunday to complete the three-game sweep.

A day after turning a seven-run deficit into a seven-run win, the Red Raiders (16-1) found themselves down 4-0 early and trailed 6-2 in the bottom of the eighth. Tech, however, captured its late-inning magic once again as a two-run single from sophomore Max Marusak in the eighth cut the lead in half and an RBI walk and sac fly in the ninth pushed the game into extras.