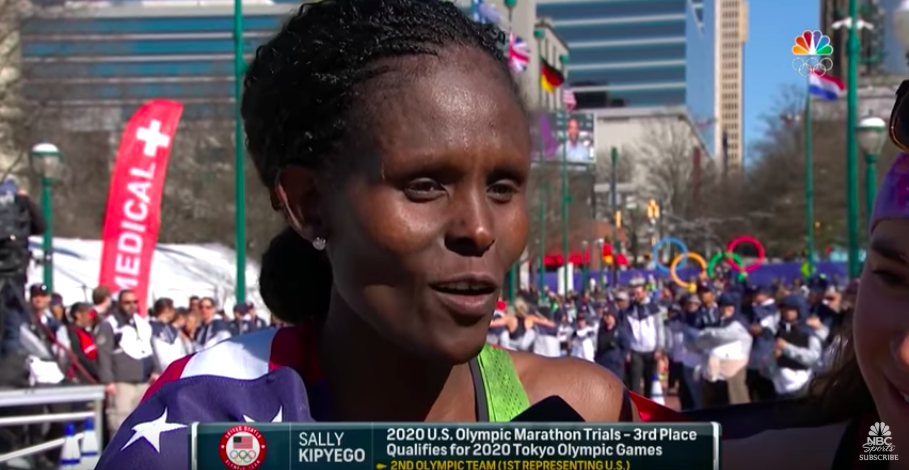 One of the greatest athletes to ever compete and wear the Double-T, women’s distance runner Sally Kipyego competed in the U.S. Olympic Trials on Saturday and ran a 2:28.52 to finish 3rd overall and with that finsh, she qualified for the Tokyo Olympics. Kipyego is mentioned at the 1:30 mark, the 2:40 mark she gets quite a bit of time, and finishes at the 4:25 mark of the video below.

Kipyego, a native of Kenya, became a U.S. citizen in 2017 the same year and also had a daughter, Emma, the same year.

Kipyego is a 2019 inductee into the Texas Tech Hall of Fame, two of her coaches, Jon Murray and Wes Kittley, could not have given her higher compliments for her Olympic qualification as well as her 9 NCAA Championships during her time at Texas Tech.

“What a great accomplishment for Sally,” said Director of Track & Field and Cross Country Wes Kittley, who coached Kipyego at Tech from 2006-2009. “Red Raiders far and wide are so proud of what she has accomplished.”

“It’s just a testament to her incredible hard work and dedication to the sport,” said head distance coach Jon Murray, who coached Kipyego to three straight NCAA and Big 12 titles in cross country. “Coming back from pregnancy and some of the rough times she’s had these past few years really shows her commitment. At Tech, she hated to lose, and I think that shows in her continued pursuit to be back in race shape and be the best that she can be.”

Congrats to Sally on an absolutely incredible accomplishment and good luck in Tokyo!