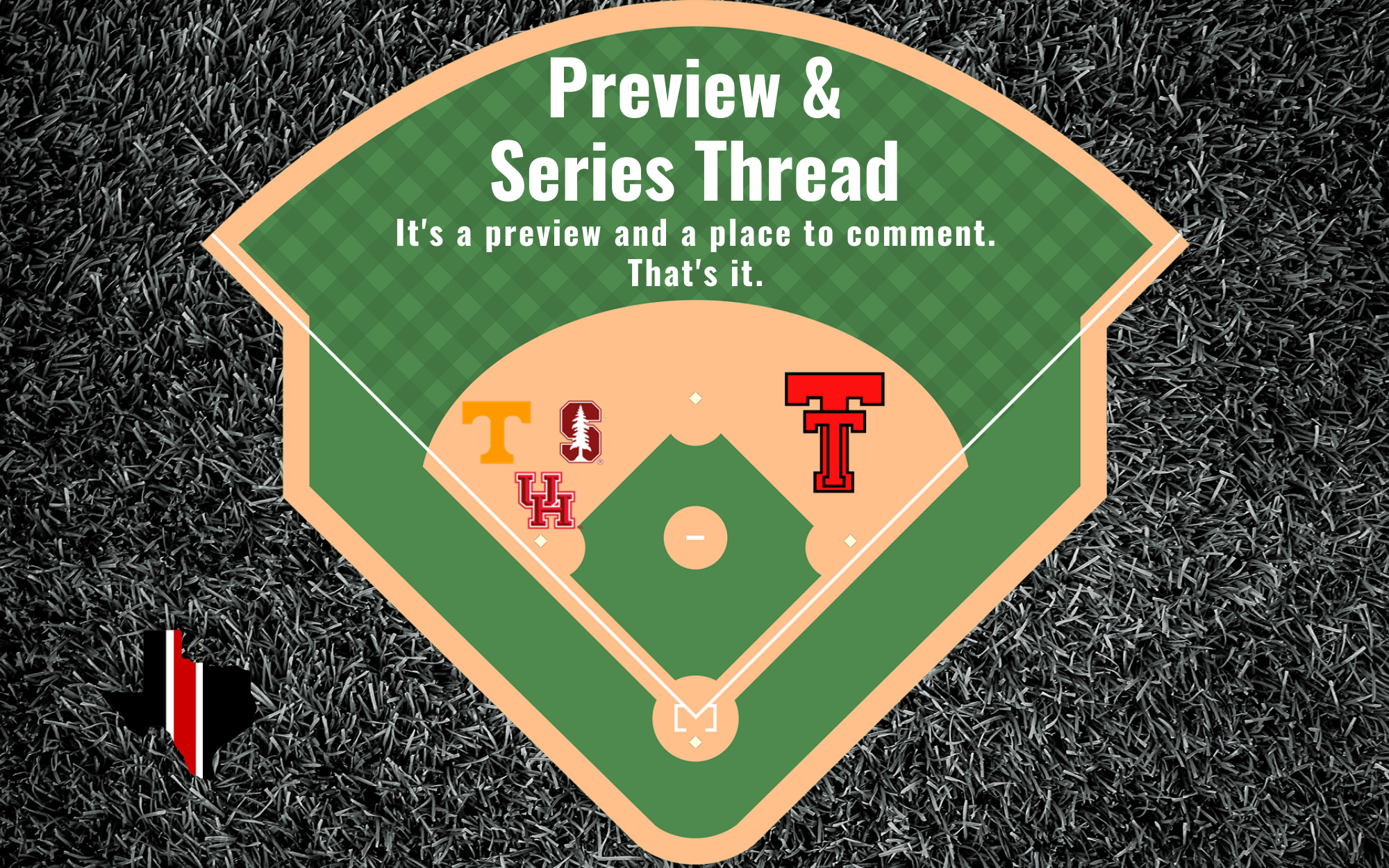 Where to Watch: Dell Diamond | Round Rock, Texas

We’re ready for the second series of the year and this should be fun, playing three Power Five teams, Tennessee, Stanford, and Houston, on consecutive days. Tennessee swept Western Illinois as well as a mid-week win against Charlotte.   Stanford lost 2 of 3 to Cal State Fullerton and lost a mid-week game to Santa Clara. Houston started off the year by losing 2 of 3 to Youngstown State, home of the fighting Pelini’s. Stanford is ranked, but they’ve had some offensive issues against Fullerton. Regardless as to what these other teams have done, I’d think that notching a few wins would be beneficial.

Outfielder Max Marusak, Tech’s first choice to bat leadoff, struck out four times and aggravated a hamstring injury on his fifth at-bat in the season opener, and Dru Baker hit the ball hard, albeit with some bad luck, in the Red Raiders’ last three games last weekend.

So who’s up first?

“If you had asked me last Thursday,” Tadlock said, “I would have said Max, without a doubt. He was that good in the preseason. He was seeing the ball really well. Obviously, his speed can put a lot of pressure on people. His bat path, his swing, he obviously probably compensated that a little bit with the hamstring.”

College Baseball Nation – Round Rock Classic Round Up

Texas Tech is our only ranked team in this tournament, but that doesn’t mean there won’t be great games and upsets still. This tournament will have great pitching all weekend long and any game Texas Tech is in will have a lot of offense. Personally, I could see any of these teams beating any of the others. Stanford and Houston might not have gotten off to great starts, but there’s a reason a lot of people, including us, were high on them.

Texas Tech vs Tennessee Friday night will be one of the better games this weekend in college baseball. The way those two offenses are playing right now, anything is possible. Tennessee’s pitching is really good this season, as it was last season, but I think Texas Tech pulls this one out behind red-hot freshman, Nate Rombach, who has five home runs and 15 RBI so far this season.

No. 1/6 Texas Tech baseball suffered its first loss of the season Friday night, 6-2, to Tennessee in its opener at the inaugural Round Rock Classic inside a frigid Dell Diamond.

The Red Raiders (4-1) spotted the Vols (5-0) three runs in the bottom of the first and were unable to climb out of the hole as Tennessee starter Chad Dallas (2-0) and reliever Sean Hunley combined to limit Tech to its lowest hit and run totals of the young season.

After scoring 65 runs last weekend, the Red Raiders managed just two runs on six hits on Saturday while leaving seven on base. Tech scored a run in the third and another in the fourth to make it a 4-2 game, but Tennessee added a pair of insurance runs in the sixth and seventh to keep a comfortable distance from the potent Red Raider lineup.


The Red Raiders (5-1) dug out of an early 2-0 hole with runs in the first, second and fourth, and a three-run seventh helped create a comfortable margin down the stretch to top the first ranked opponent it saw this season in the Cardinal (1-5).

Junior Bryce Bonnin (2-0) and sophomore Micah Dallas combined for 15 strikeouts, a season high for the Red Raiders, while allowing just six hits and a walk. Bonnin sat down nine batters for a new career high. Dallas, who earned his second save of the season, has now racked up 11 strikeouts on the year in 7.0 total innings out of the bullpen.

Sophomore Cole Stilwell led the charge offensively as he answered a Tim Tawa two-run home run in the top of the first with a solo shot in the home half of the frame. It marked the first hit of the season for the Rockwall, Texas, native, who finished 2-for-4 with a team-high two RBI and a pair of runs.


Senior Brian Klein delivered a walk-off single in the bottom of the 10th inning and the No. 1/6 Texas Tech baseball team closed the Round Rock Classic with a 3-2 victory over Houston on Sunday in front of over 5,100 fans at Dell Diamond.

After struggling at the plate through most of the weekend, Klein pulled through when it mattered most, finding a gap on the right side of the infield with two outs in the 10th that allowed Dru Baker to speed home from second for the winning run.

Baker reached base in all five plate appearances on the evening, going 2-for-2 with a career-high three walks. He led off the game for Tech with a solo blast to left that answered a Houston run in the first. He drew a leadoff walk in the 10th and stole second with two outs in the frame. The Cougars intentionally walked junior Braxton Fulford to bring up Klein, who was 0-for-12 at that point over the weekend before his heroics.