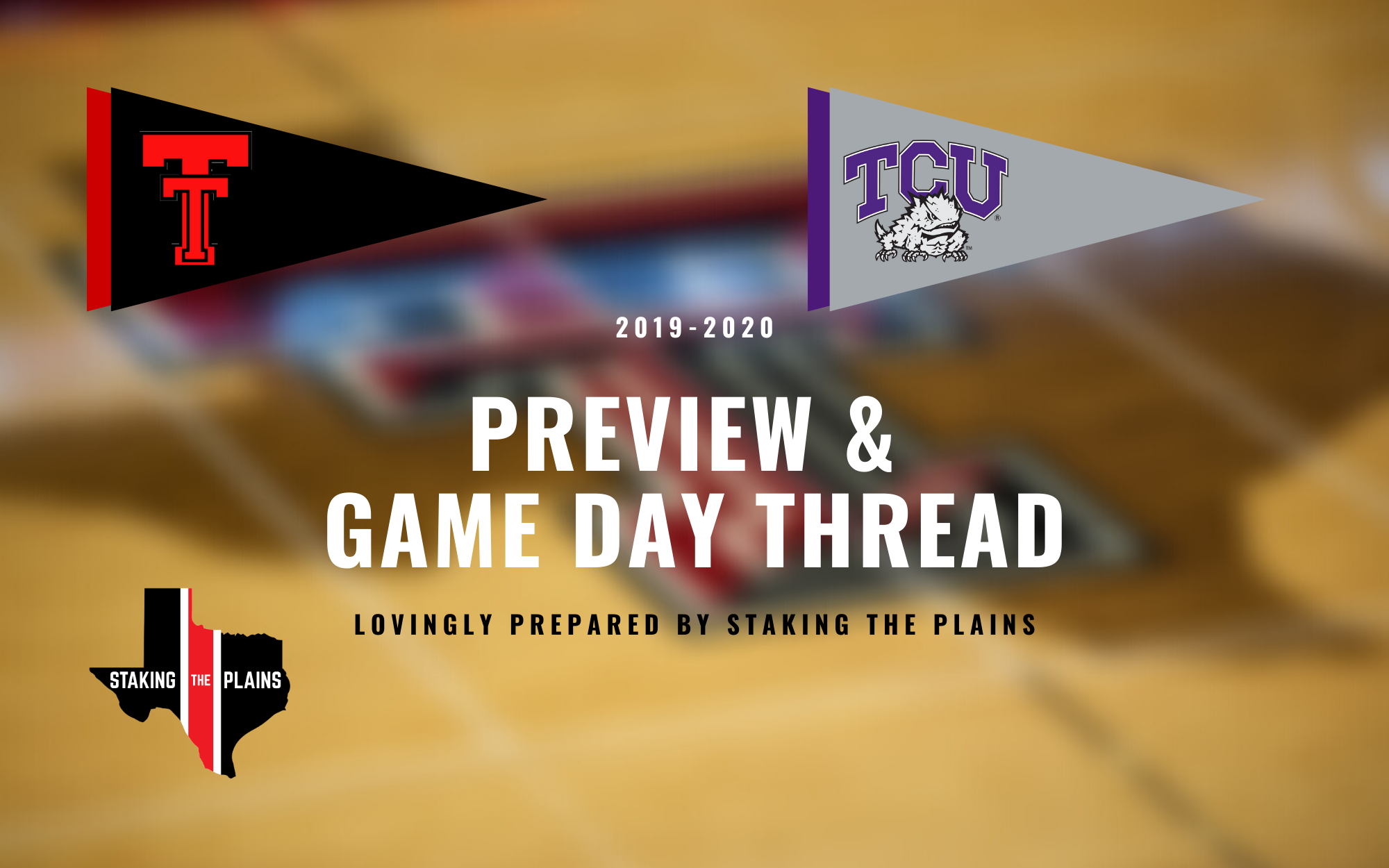 On the road again!

Where to Watch: Ed and Rae Schollmaier Arena | Ft. Worth, Texas

1. Stats. Same records, but the advanced stats see these teams a bit differently. TCU is ranked just behind Texas Tech, are decent offensively, but they do rebound the heck out of the ball, 51st in the nation in offensive rebounds and they shoot very well from behind the three-point line, 64th in the nation. With that being said, the Horned Frogs don’t get to the line really at all, 327th in the nation, and when they do, they don’t make them, 63%, good for 334th in the nation. Defensively, they are very good in terms of forcing turnovers and much like Iowa State, for whatever reason, team’s don’t shoot a good free throw percentage against them. I don’t see how that translates moving forward, but I’m throwing it out there.

2. Scouting. Bane is the star and that’s not a surprise. I was surprised he didn’t declare for the NBA draft. Bane is a very good three-point shooter, 41% from the floor, is also very proficient on the defensive glass and in terms of dishing out the ball. Samuel is probably the teams best player overall, terrific shooter from the floor, he’s either dunking it or shooting from close range, an excellent rebounder and a terrific rim protector. I’d also watch out for Farabello on the three-point line, he’s making 47% of his three-point shots, he doesn’t have the volume that Bane does (he’s already got 100 attempts, compared to 36 for Farabello), while Nembhard doesn’t shoot particularly well from the outside, 30%, but has 72 attempts, while Dennis is kind of in the same boat, 74 attempts and making 35%. Both Dennis and Farabellow are very good distributors, so watch out for that.

3. How They Match Up. Texas Tech is trending in the right direction after a rough start to Big 12 play. I think Texas Tech and TCU have very similar teams in how they play and how they line up. Essentially running out guards 1-4 and then a post-player at the 5, but TCU does have the better post-player. Texas Tech is just slightly better than TCU overall (much better defensively), and I’ll be interested to see how the Texas Tech defense travels on the road. Statistically, Texas Tech is supposed to eek out a win by 0.3 points according to T-Rank, so this is expected to be a pretty close game. Also, TCU is 1-2 as an underdog and 4-7 against the spread at home, as well as being 1-9 against the spread in the last 10 games against Texas Tech.

“It’s two back-to-back games. Let’s try to get to three, four, five, six. When he finds that next plateau of his game — where it’s six out of seven, seven out of eight (games), doing these things — he won’t be here much longer. And that wouldn’t be a bad thing because that mean he’s reached his goal to become a pro. … He’s that good, he’s just got to keep working and find that consistency.”

Edwards, who grew up about 30 minutes from the TCU campus as an Arlington native, will look to do just that against the Horned Frogs (12-5, 3-2), who have dropped their last two conference contests after starting with three straight victories.

Desmond Bane is averaging a team-best 16.6 points, netting double figures in his last seven games, to go along with 6.7 rebounds for TCU, which owns a 10-2 mark at home. R.J. Nembhard (12.7 points, 3.8 rebounds) and Kevin Samuel (10.5 points, 8.4 rebounds) are the other players averaging double-digit point totals.

The Frogs didn’t just lose, they were trounced by a combined total of 50 points after struggling from the 3-point arc. In the two games, TCU was 15 of 59 on 3s.

The Frogs were especially cold in the first half against the Sooners, which put them in an early hole few teams could recover from, coach Jamie Dixon said.

“When you lose by 20 and lose by 30 there are a few things that go around, but it’s part of our league and it happens,” Dixon said.

“The biggest thing is responding mentally and physically. We have to make some shots. We’re relying on 3-point shooting so when you don’t make them it becomes pretty obvious and that’s what we’ve done the past two games. Especially early, that’s kind of setting the tone right now.”

Round six of the 18-round Big 12 fight takes No. 18 Texas Tech to Fort Worth to play TCU at 7 p.m. on Tuesday at the Schollmaier Arena.

Texas Tech comes into the week 18th in the nation with 16.5 assists per game, 25th with a 12.2 scoring margin advantage and 30th by holding opponents to 61.6 points per game. The Red Raiders lead the conference with 280 total assists, 268 free throws made and 17.41 turnovers forced per game. The team is holding opponents to 39.6 percent shooting with is 50th in the nation and five in the conference and also third in the Big 12 with a 1.19 assist-to-turnover ratio. With a 73.6 winning percentage (184-66) as a NCAA coach, Texas Tech head coach Chris Beard has the eighth best percentage among active coaches and is 88-36 at Texas Tech. The Red Raiders are led in scoring by freshman Jahmi’us Ramsey (15.5 ppg.) who is sixth in the conference and graduate transfer Chris Clarke who is at 8.0 rebounds and 5.7 assists per game which both rank in the top-10. Clarke is currently 41st nationally in assists (97 total) and 34th with a 2.43 assist-to-turnover ratio, while Davide Moretti is eighth nationally with a 91.5 percentage at the free-throw line. Kyler Edwards was named the Big 12 Player of the Week on Monday after averaging 23.0 points per game last week, including scoring a career-high 24 at Kansas State and then dropping 22 with a career-best five 3-pointers last Saturday against Iowa State.