I hope you’re enjoying any additional time off that you may have. I’m doing the same and when I have multiple free mornings, I’m able to crank out some solid offseason content. The Morning Stake will return tomorrow.

With Jett Duffey likely moving on, David Yost never took advantage of a guy that could maybe stress a defense into making some bad plays. Yost never really did that and so now, I think that Yost needs to find himself a part of the offseason redzone laboratory and figure out some plays that take advantage of the tight end and the larger receivers that are on this roster. Other than the corner fade. Not only that, but an improved running game should help.

This is a pretty easy one to identify in terms of regression. In 2018, the offense was converting at a very high rate, 47.26% in 2018, which was 13th in the nation, and has fallen to 38.23% in 2019, which is 83rd in the nation. I think that some of this is a reflection of the offense simply not pushing the envelope and Wells’ propensity to be more cautious than daring. Not only that, but Kingsbury was definitely better on a week-to-week basis of creating plays that would gain those critical third downs.

3. Running to the End Zone

4. Correlation Between Sacks and Passing Touchdowns?

5. Time of Possession Was Terrible

I would have assumed that time of possession would have been a big deal for Wells, but it was significantly worse and I think there were a lot of factors that went into that. In 2018, the TOP was 30:13, good for 56th in the nation and then dropped to 28:14, 105th in the nation. The offense couldn’t convert on third downs, and the defense was giving up significantly more third downs and you have a team that wants to be 50/50 running the ball, not doing such a great job of controlling the the ball at all. The defense gave up more yards in 2019, almost 30 per game and it’s because they were having to lay defense that much more. That simply has to be better, not because I care about time of possession, but solve the third down issues and this will follow.

And these stats were pulled from the terrific site, MyTeamsBetter, and would love your own insight in the comments. 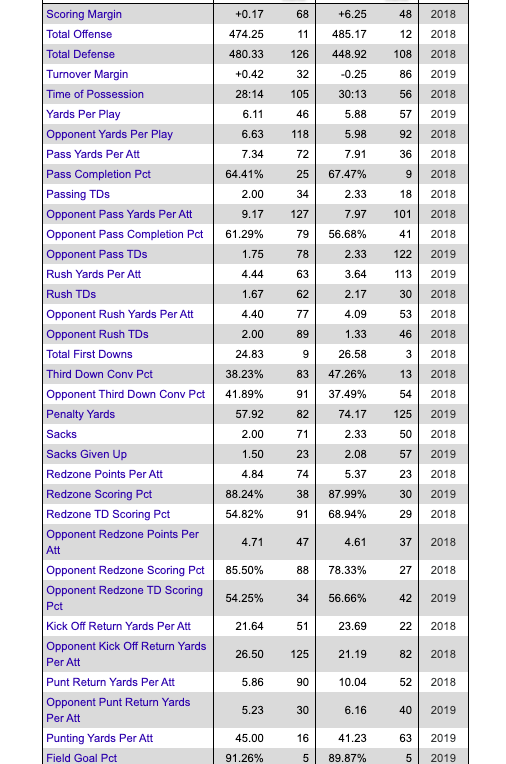