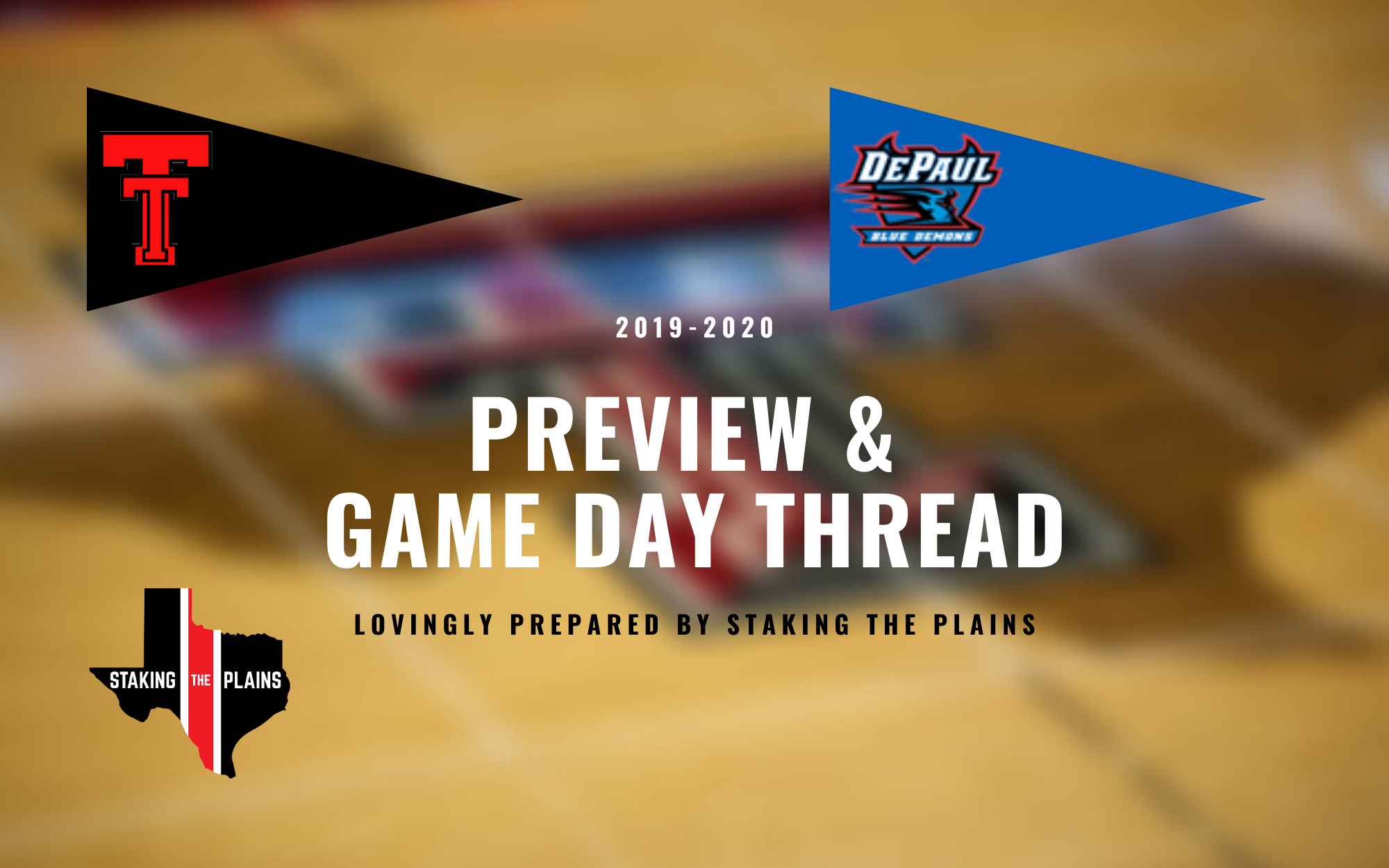 Texas Tech is in Chicago!

1. Stats. Here we are friends. After a less than terrific showing in Iowa (although they were close losses with a relatively new team), Texas Tech is back on the road in Terrence Shannon’s hometown, Chicago, to take on the Dave Leitao-led DePaul Blue Demons. DePaul is decent on both sides of the ball (yes, I’m doing this), they’re a good shooting team and they crash the boards well on offense, while they also do a decent job of holding opponents to a an eFG% of 42%. That’s pretty good. It should also be noted that DePaul is a good three-point shooting team and that sort of ruined Texas Tech in Vegas. You want to know what they don’t do well? Shoot free throws, they only make 62.5% of their free throws

2. Scouting. Reed and Moore are the best players, pretty clearly. Reed has been with the program for the past two years and just stuck with it and now he’s a walking double-double. A terrific shooter, but he’s mainly in and around the basket. He’s a fantastic offensive rebounder and if you’re looking for one guy that does that well, it’s him. Moore is a Kansas transfer and he’s absolutely been a terrific scorer with a high assist rate and the best three-point shooter on the team making 44%. Coleman-Lands is decent, making 38%, but a full 6-percentage point difference is dramatic.

3. How They Match Up. During Beard’s press conference, someone asked if Holyfield would match-up with Reed and Beard was quick to say that this may not be the case. I think we’re getting close to a line-up change and I could see Clarke stepping in because he can guard the post, he can rebound, and he’s actually starting to assert a bit of an offensive game. I don’t know that Shannon is ready to guard a player like Reed, but I’d think that Clarke was born ready. That gives Texas Tech a really young bench and I think that was part of the reason why Shannon started and Clarke was the 6th man, but I think with Clarke starting, that gives Beard more options defensively. Not only that, but DePaul has to significant post players and Butz is less offensive and maybe Holyfield doesn’t pick up any cheap fouls.

Texas Tech is set to take on undefeated DePaul at 7:30 p.m. Wednesday as part of the Big 12/Big East Battle at Wintrust Arena in Chicago.

The game, scheduled to be televised on FS1, precedes the Red Raiders’ clash with Louisville at 6 p.m. Dec. 10 in the Jimmy V Classic at Madison Square Garden.

“Our schedule gives us no favors now,” said Beard, whose team is 5-2. “But it does give us a great opportunity to play a DePaul team who’s maybe as good as they’ve been in the last 30, 40 years of their program. And certainly right around the corner, we have a crack at maybe the number-one team in the country (Louisville). … It’s challenging, but it’s a great opportunity week.”

The DePaulia’s Lawrence Kreymer – DePaul not getting ahead of themselves as Texas Tech comes to Chicago:

“[It’s] just another game,” junior guard Charlie Moore said. “We know [Texas Tech] is good, they went to the national championship last year. We just try to attack it like every game, execute, do what we do defensively, just play our game.”

Unlike last season where DePaul failed to really test themselves against quality opponents on the road, they have went to Iowa, Boston College and Minnesota to begin this season and won all three games. Now, with Texas Tech coming to Chicago, the team has an established identity that they can use to their advantage against the Red Raiders.

“It’s really no mentality,” Moore said. “I think it’s something instilled in us by now. Whether we are away or at home, we just want to do what we do, don’t let anyone dictate our game, run around defensively, get out in transition and just try and get easy baskets. I think it’s no mentality, it’s just what we do now.”

The second trip of three straight takes Texas Tech to Chicago this week where the Red Raiders will play unbeaten DePaul at 7:30 p.m. on Wednesday in the Big 12-Big East Battle at the Wintrust Arena.

The Red Raiders (5-2) will play their first true road game of the season after dropping a pair of neutral-court matchups against Iowa and Creighton last week at the Continental Tire Las Vegas Invitational at the Orleans Arena and before playing No. 1-ranked Louisville (7-0) next week at the Jimmy V Classic in New York. Tech was down by 14 at halftime against the Bluejays, fought back to force overtime but then was outscored 9-2 in the extra five minutes to fall 83-76 following a Thanksgiving night 72-61 loss to Iowa after starting the season with a 5-0 record. The Blue Demons (8-0) are coming off a 73-68 road win over Minnesota last Friday and also have Power 5 wins over Iowa and Boston College this season. DePaul is 5-0 at the Wintrust Arena and currently ranks fifth nationally with 50 total blocks and is 12th by limiting opponents to 35.6 percent shooting this season. The team earned a 93-78 win at Iowa on Nov. 11 in the matchup of the only common opponent of Tech’s this season. Texas Tech will look to avoid its first three-game non-conference losing streak since the 2012-13 season.