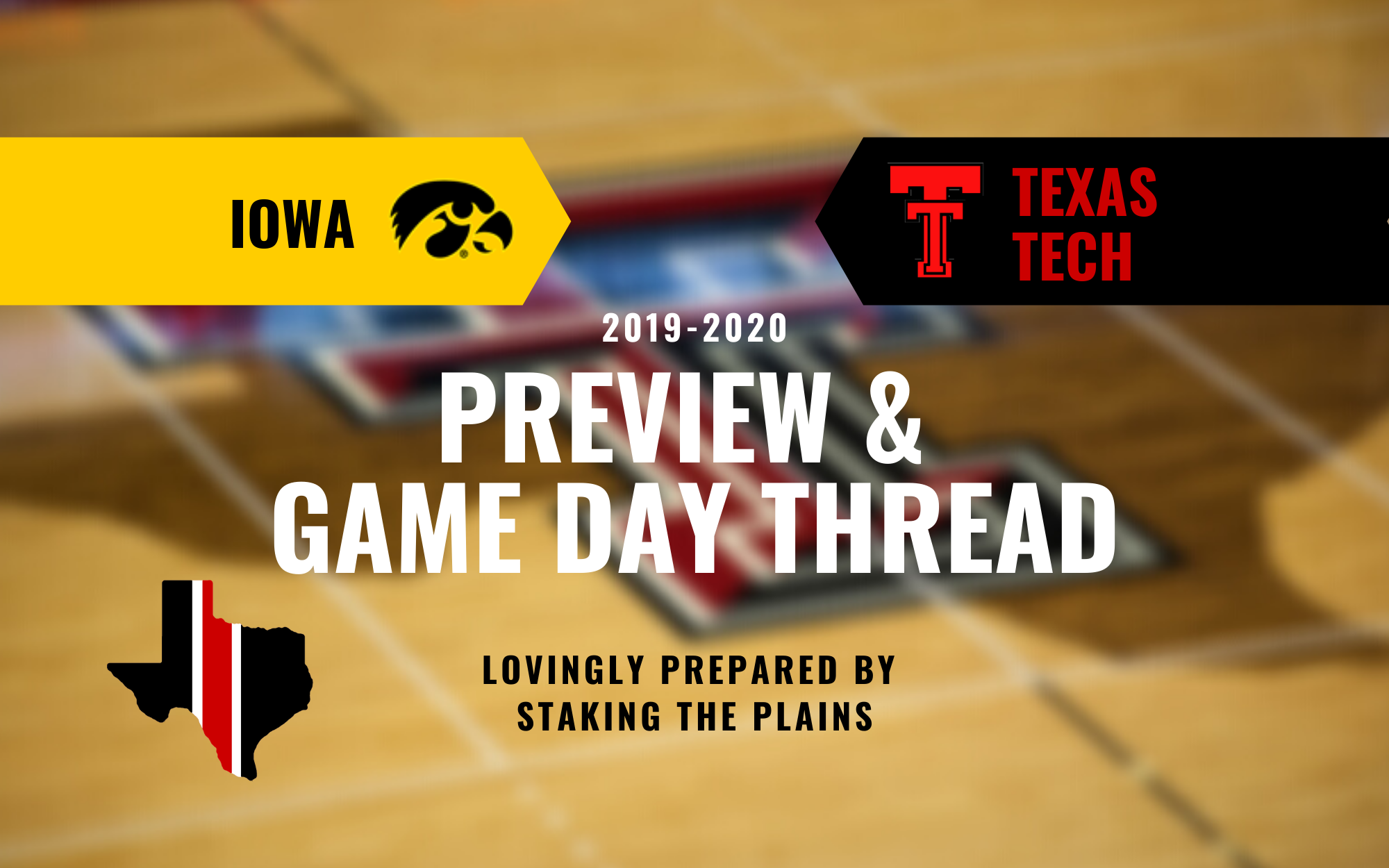 1. Stats. Well, Iowa is very good offensively, not the best shooting team, but they do just about everything else very well. The Hawkeyes don’t turn the ball over, they shoot at a high free throw rate and they score at a very high rate. And to say that Iowa doesn’t shoot very well isn’t true, they’re fine, but they are not top 20 or so like they are in all of those other categories. Defensively they allow teams to shoot the ball really well, don’t force turnovers, and simply allow teams to shoot really well. The one thing that they don’t do is foul, not a lot of teams get to the line against Iowa.

2. Scouting. Well, Iowa has some size. Lots and lots of size. Texas Tech has one player over 6’10”, Iowa has 156. Garza is is a stud and he’s offensively an excellent player in almost every respect and he’s not only shooting 59% from the field, he’s also made 7 of 12 behind the three-point line. Fredrick is very good offensively as well, but he just doesn’t have the volume of shots that Garza has, but he’s an excellent shooter, like Davide Moretti type of good shooter, making 56% of his shots and 60% of this three-point attempts. McCaffery is the son of the head coach, Fran, and he’s an excellent passer and just a sophomore, but he’s terrific at setting up his teammates. In terms of how Iowa lost if they’ve got so many terrific offensive players? Well, their defense was absolutely terrible against DePaul (or the DePaul offense was unstoppable). The Blue Demons had eFG% of 71% during the game and DePaul simply could not miss, 24 of 37 for the game. I’m not sure how a team could shoot so well, but DePaul is on the schedule as well, so be ready for that. I should also mention that Jack Nunge tore his ACL last week and was a starter. I’m plugging in Kriener as the starter, but it could also be Pemsl.

3. How They Match Up. Well, this is going to be interesting for sure. Holyfield is going to have to work on not picking up cheap fouls because he does that quite a bit here recently. Texas Tech’s biggest flaw as a team is that it has almost zero size, so when Iowa Starts a team with two players who are 6’10” or bigger, I’m not sure who will take the other big player. The easy play here is for Clarke to take the other post player and I’d imagine that he’ll do fine, but there’s just no size to combat Iowa’s size and they not only have their starters, but they have options. Of course, from a guard perspective, I don’t know that Iowa will be great athletically and I’d imagine that Ramsey will have a pretty good opportunity to create.

But, if you fast forward five games, Moretti can only crack a smile when he’s asked about the development of his “work in progress” squad which won its fifth straight contest and is ranked No. 12 in the country.

“I really do feel we’re getting better,” Moretti said Tuesday after practice in Las Vegas. “We’re getting closer everyday, and it’s just a matter of time.

“Even last year’s team — we got closer and closer as the season went along. We’re headed in the right direction. The key is for us to stick together.”

HawkCentral’s Mark Emmert – November tourneys have been telling for Iowa basketball: What will we learn this time?:

“It’s going to be really important for us to be ready and come out from the start and kind of prove that we belong again, kind of like we did last year,” said Iowa senior guard Jordan Bohannon, who will attempt to play in both contests while battling soreness in his surgically repaired hip.

Added senior center Ryan Kriener: “Last year was a very us-against-the-world mentality. … Nobody thought we were going to be anything special, and there’s kind of the same feelings going around. We’re going to prove people wrong again.”

Texas Tech is set to compete in the Continental Tire Las Vegas Invitational on Thursday and Friday at the Orleans Arena in Las Vegas. The No. 12-ranked Red Raiders (5-0) open the tournament at 7 p.m. (CT) on Thursday against Iowa and will then play on Friday against either Creighton or San Diego State.

The Continental Tire Las Vegas Invitational Championship will be played at 7 p.m. on Friday followed by the consolation game at 9:30 p.m. at the Orleans Arena.

Tech is coming off a 96-66 non-conference win over Long Island and 72-57 victory against Tennessee State last week in the campus games of the tournament. The Red Raiders overcame a 42-41 halftime deficit on Sunday to earn a 30-point win over the Sharks where the team shot 51.5 percent from the field, 57.9 percent on 3-pointers (11-for-19), was 15-for-20 (75%) at the free-throw line and committed only 10 turnovers. The Hawkeyes (4-1) are on a three-game winning streak with wins over Cal Poly, North Florida and Oral Roberts after suffering their only loss of the season against DePaul on Nov. 11. Iowa went 23-12 overall and was 10-10 in Big Ten play last season. The team advanced to the NCAA Tournament where they earned a 79-72 win over Cincinnati before falling to Tennessee in overtime in the second round. The trip to the NCAA Tournament was the fourth for the Hawkeyes under head coach Fran McCaffery.