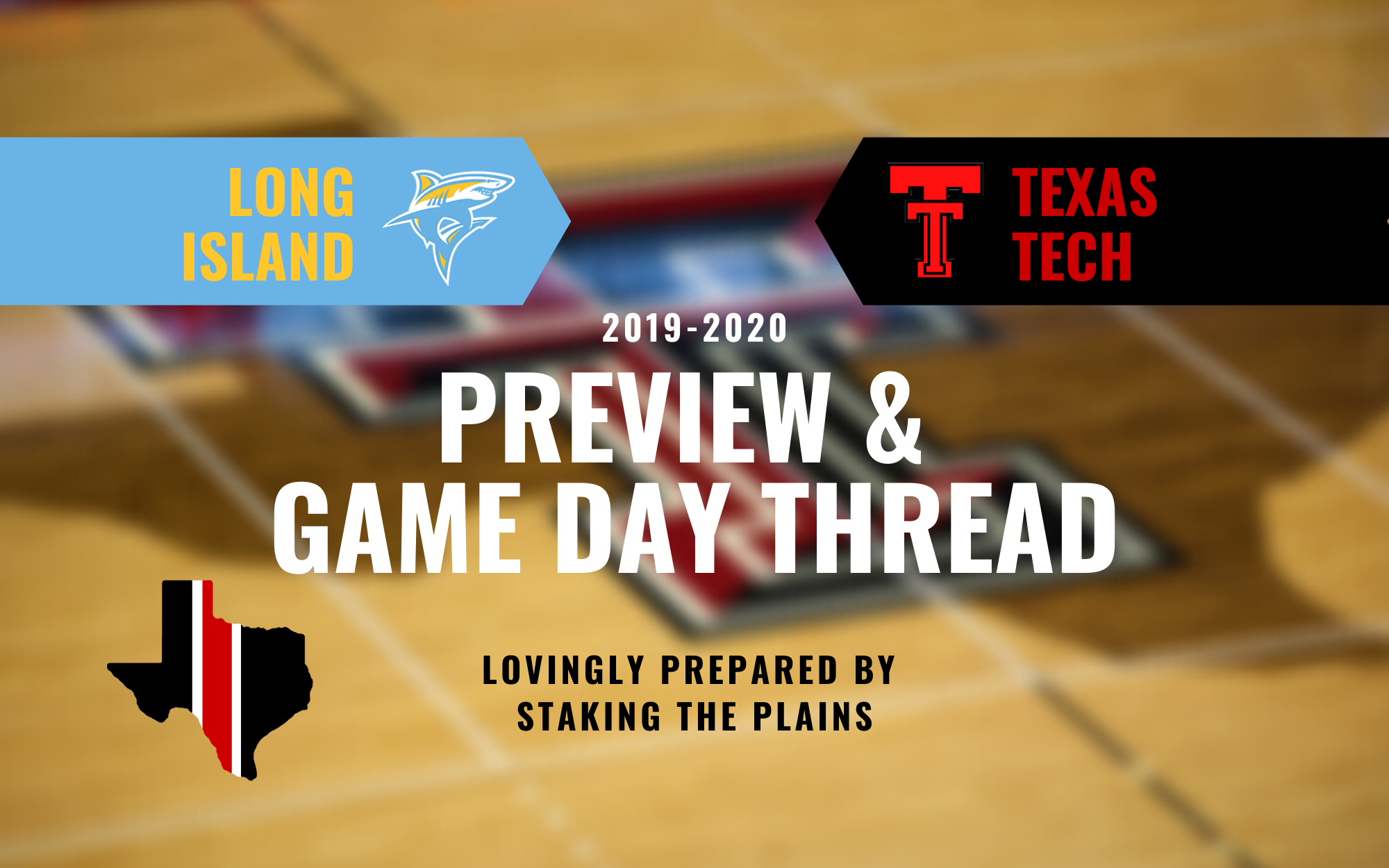 The Line: Not available.

1. Stats. I initially thought that there were no statistics for Long Island, but they recently changed their name from the Long Island University-Brooklyn Blackbirds to the Long Island University Sharks. Their advanced stats are still under LIU-Brooklyn or just LIU. As an aside, LIU has over 15,000 students, has a Brooklyn campus and a Brookville campus. This is somewhat of the last absolutely terrible opponent for Texas Tech, thankfully. Up next is Iowa, then DePaul, and Louisville. Back to Long Island, there’s a bit of disparity in terms of some of the stats, I’ll trust T-Rank for whatever reason and tell you that LIU can be a good offensive team, but are not a good defensive team.

2. Scouting. Flowers is probably the team’s most important player and for sure the team’s best rebounder. I should also add that Flowers also averages something like 3 assists, so he can somewhat do it all for LIU. He’s just not a very good shooter overall, or I should add that he’s very good from 2-point range, but is shooting 24% from the 3-point line and he’s jacked up 45 shots and only made 11. So he’s shooting from deep, but not making them. He should not be doing this, or he should continue to do this agains Texas Tech and then stop doing it after this game. Clark is probably the team’s best shooter and should probably shoot more, but he takes almost all of his shots mid-range.

3. How They Match Up. Not a very big team, two starting guards are under 6’0″, but Flowers, Agosto, Clark, and Bradley all shoot very well inside the arc, in fact, in order, their shooting percentages are 57%, 65%, 60%, and 60%, so yeah they all shoot very well, their problem is that they can’t hit anything outside to speak of. Bradley is the team’s best shooter from deep and he’s hitting 32% of his 3-point shots. So, let the Sharks shoot from the outside and pack it the heck in defensively and contest any and all mid-range shots.

“I think we’re going the right way,” Texas Tech junior guard Davide Moretti said of how the Red Raiders are coming together. “Games like this, they’re going to help you because we faced some adversity in this game and I think we bounced back in a positive way. Of course, we had a lot of mistakes, and we’re going to work on it (Friday). But I think we responded pretty good.”

In the contest, the Red Raiders struggled to find their offensive rhythm for several reasons — one being the lack of TJ Holyfield on the floor due to the graduate transfer from Stephen F. Austin picking up his first foul in the first two minutes of the contest.

The 6-foot-8 forward was assessed his second foul under the 14-minute mark of the first half and was relegated to the bench for what amounted to five minutes of playing time.

All of No. 12 Texas Tech’s attention is on Long Island University as it prepares to host the Sharks at 1 p.m. on Sunday for a Continental Tire Las Vegas campus game at the United Supermarkets Arena. The first 5,000 fans in attendance will receive a limited edition commemorative Final Four poster and Raising Canes will be outside the student entrance to provide free food, coupons and swag while supplies last.

The Red Raiders (4-0) extended a 50-game non-conference home winning streak with a 72-57 win over Tennessee State on Thursday in the first game of the multi-team event that will continue next week in Las Vegas. Tech, which started last year with a 10-0 record, is unblemished through four games for the third straight season and the 18th time in program history. Under head coach Chris Beard the Red Raiders are now 53-5 in home games and 80-31 overall.