Favorite Place. I am sure that you all feel the same way, but Texas Tech is one of my favorite places in the world. When driving from where I stay which is the the southeastern side of the Metroplex, when I arrive in Weatherford, I’m always faced of just traveling I-20 or going state highway 180. There’s something cathartic for me in going through each of those small towns, Mineral Wells, Breckenridge, Albany, Anson, and Roby all before I arrive in Snyder to head north. I think going 180 is technically 10 minutes slower, although it didn’t used to be that way, but with the growth of Weatherford and Mineral Wells, those aren’t exactly small towns any more. I try to stop at the best sandwich stop along the way in Albany, I don’t know what it’s called, but on Sunday after a weekend of my kids having their full of chicken strips and french fries, a turkey sandwich with chips is a nice change of pace for them (although they both wanted the pizza sitting under a hot light). Just being on campus is never long enough, but those early morning runs are the absolute best. If you’re not a running person, just find a place to take a walk around campus as the sun rises is one of the best things that I do and if you can swing it, you should.

Texas is faltering and I cannot explain why other than they are decimated by injuries (there’s probably more to it than that). I cannot explain how Kansas State loses to West Virginia at home and if you wanted to know how or why I have hope this weekend, that loss is part of it, but maybe it shouldn’t be. I cannot tell you how happy that Oklahoma came back to beat Baylor. As far as this week goes, I still don’t have a good read on Baylor and I’d probably take Baylor if forced to pick against the spread. I think they’ll bounce back, but I’m also not sure what Texas team will show up. Oklahoma State has lost their starting quarterback and going on the road to Morgantown isn’t easy. 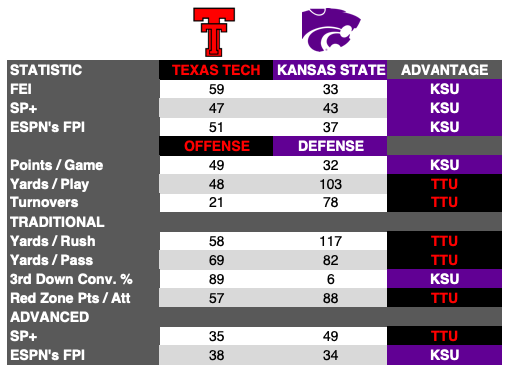 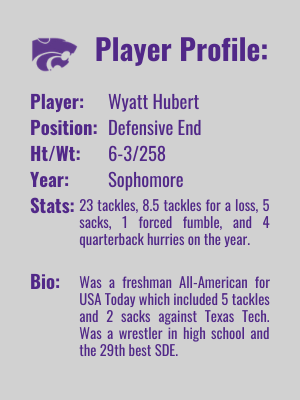 The two linebackers are Elijah Sullivan (6-0/210) and Da’Quan Patton (6-1/227) and they’re undersized to an extent and have similar stats, 43 tackles and 4.0 tackles for a loss for Sullivan and Patton with 36. Daniel Green (6-2/226) is the back-up linebacker, so depending on the offensive set, I’d bet that Green is the third linebacker and he does have 2 sacks.

When Kansas State Has The Ball 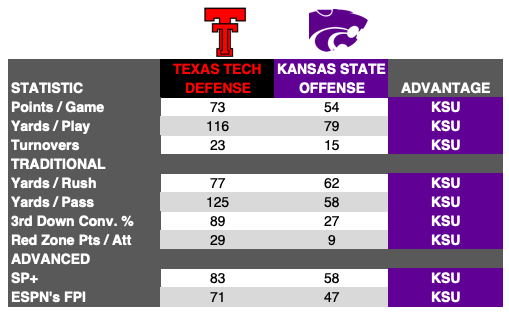 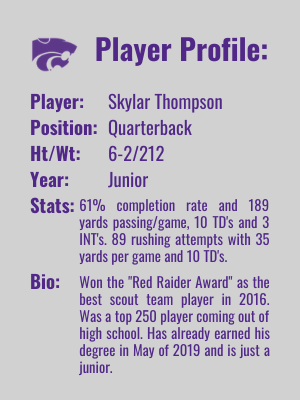 The quarterback is Skylar Thompson (6-2/212) definitely has his ups and downs and is definitely dual-threat as he’s second on the team with 89 carries for 350 yards and 10 rushing touchdowns. Thompson completes 61% of his passes for 1,888 yards with 10 touchdowns and 3 interceptions. I’m more worried about Thompson running than passing, but I felt the same way last week against TCU’s quarterback. Just last week, Thompson passed for 299 yards against West Virginia and against Texas, Thompson had a QB rating of 166, so he can hurt you through the air.

I’m honestly incredibly worried about the stopping the Kansas State run, they’re just going to punish you and without your best run-stopper, I’m just not sure what to think how this is all going to work out. TCU just ran all over Texas Tech last week, at least that’s what it felt like, but it wasn’t pretty and we all know about the pass defense.

Blake Lynch (5-5/148) is legitimately 5’5″ and 148 pounds and that’s pretty awesome. He’s 38 of 38 on extra points and 13 of 14 kicking field goals, his only miss being between 30-39 yards and has actually made both field goals between 40-49 yards. Devin Anctil (6-1/234) is a good sized punter and averages nearly 45 yards a punt, so that’s actually pretty good. I don’t normally look at these other special teams stats, but KSU is 6th in the nation in kickoff returns and 8th in limiting opponents, so the coverage will be good and I’d advise kicking it out of the end zone and just not returning kickoffs for this particular game.

I’ve got nothing to lose here so I’m predicting another Texas Tech win, something like 42-35. I have no confidence that the defense is going to stop anyone with out Jordyn Brooks, the best player on the team (by far in my opinion) and the best run-stopper. Still, I think that the offense is going to show up this week.