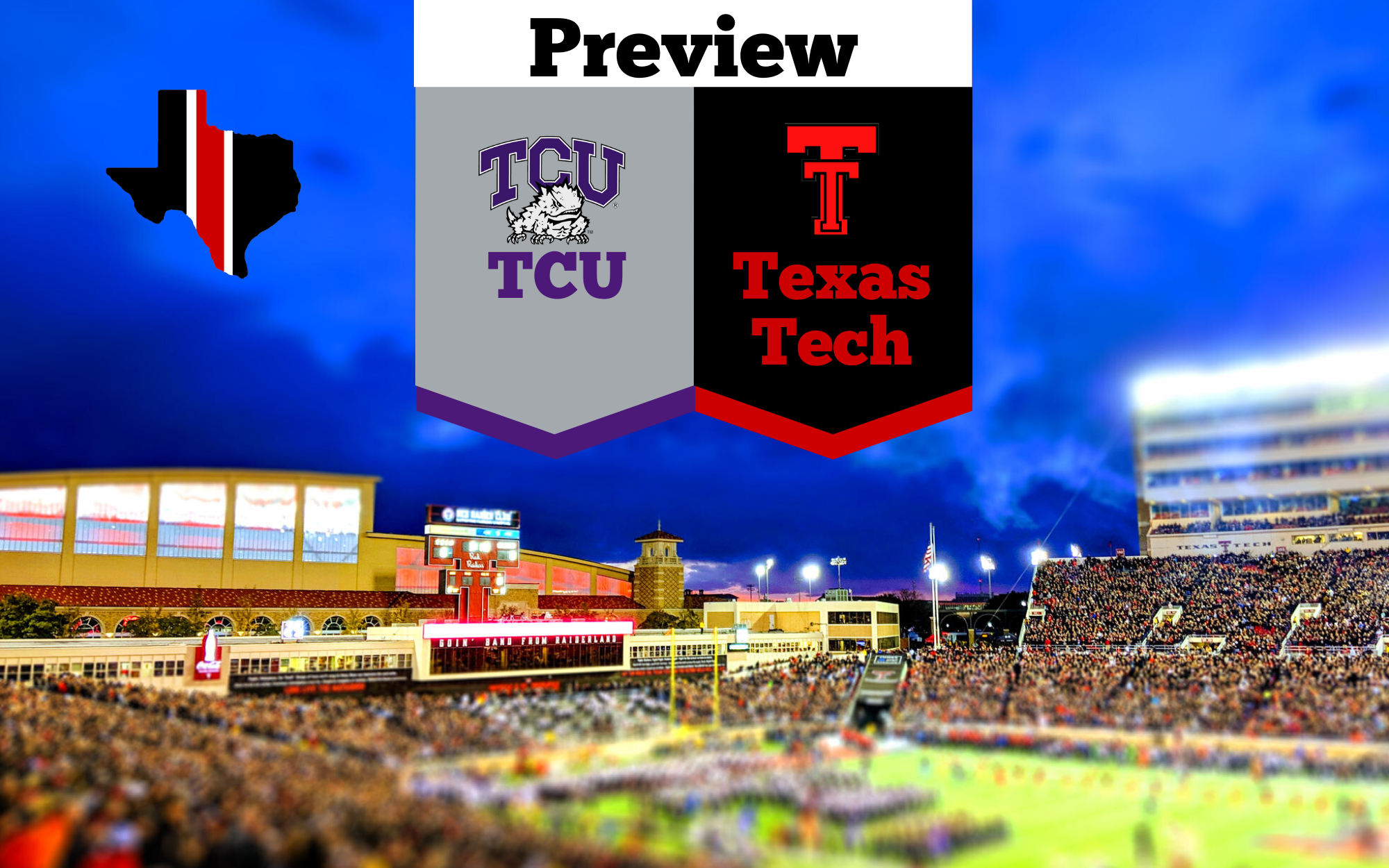 Let’s look at them Horned Frogs!

Wins Are Good! Sometimes wins give us a glimpse about what a team will be in the future versus what the team is right now. I thought that the win against West Virginia offered a bit of what we might look at on both sides of the ball to an extent. I personally think that the screen game that was largely absent is still going to be part of the Texas Tech offense with David Yost.

I think that there’s this thought that the screen game has been eradicated from the offense and I definitely don’t think that’s the case. I think that maybe this is a case where maybe Yost has given Duffey bite-sized pieces of the offense each week rather than back the dump truck up and let it all go. I think the staff correctly identified the fact that Duffey’s biggest problem was that he was turnover prone so rather than try to force-feed him the entire offense, they took it step-by-step. Yost said from the beginning that the offense is going to look better in year 2 than year 1 and if the improvement of Duffey is a microcosm of that improvement, week-by-week, then yeah, I think that’s probably true. I think that we’d all like the process to happen quicker, but it appears that Yost has really stuck to his plan with Duffey, get him to master things week-by-week rather than asking him to do too much before he’s ready to do it.

A full slate of games this week for the Big 12 and there are a handful of teams that are in Texas Tech’s spot that are middling at best, 3-3 or 2-4. That’s 5 teams that are 3-3 or 2-4 thus far and teams like Oklahoma State and Kansas State have an opportunity to push ahead.

And there’s no doubt that the game-of-the-week is Oklahoma vs. Baylor, but Texas vs. Iowa State should be terrific as well. Iowa State has lost a handful of close games this year, so their record may not look as good, but they’ve been really solid. Just not able to close things out. 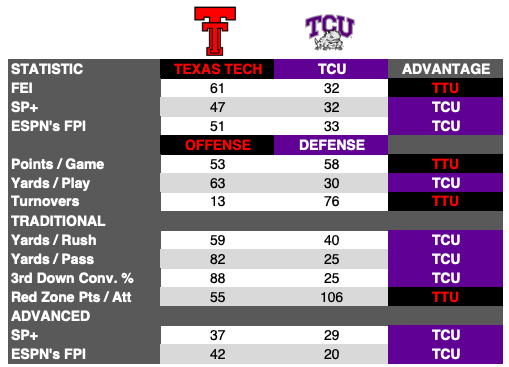 The TCU defense is as good as they have been in prior years. As always, let’s start with the defensive line, which I think that TCU almost runs a 4-man front almost all of the time. At the two end spots are Shameik Blackshear (6-5/272) and Ochaun Mathis (6-5/247) with the two inside spots being Corey Bethley (6-2/290) and Ross Blacklock (6-4/305). I think that Blacklock is the star of this year’s defense, which is a bit odd as TCU has seemed to have terrific defensive ends the past few years. Blacklock does have 9 tackles for a loss, 3.5 sacks, and 33 tackles. Mathis has 6.5 tackles for a loss, 2.5 sacks, and 29 tackles. Blackshear and Bethley don’t have stats that jump off the page, Bethley does have 2.5 sacks, but only 13 tackles overall. 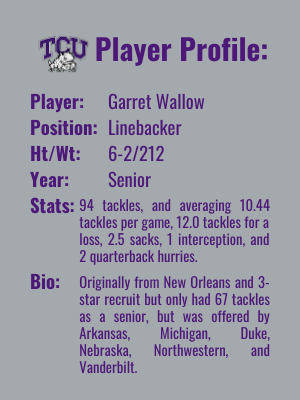 The 2-man linebacking corps is led by Garret Wallow (6-2/212) and the middle linebacker is La’Kendrick Van Zandt (6-1/206). That’s essentially the size of a decent sized safety, so without watching a lick of TCU video, it would see that the four linemen are intended to clog everything up and it is up to the linebackers to make tackles all over the danged place, which is exactly what happens. Wallow is the star, 94 tackles, 12.0 tackles for a loss, 2.5 sacks, and just making plays all over the place. Surprisingly, Van Zandt only has 12 tackles on the year, so I wonder if he’s replacing someone who was previously injured (linebackers Dee Winters has 22 tackles and Ben Wilson has 18).

The three safeties are strong safety Innis Gaines (6-2/203), the free safety Trevon Moehrig (6-2/208), and then weakside safety Vernon Scott (6-2/206). Again, those three safeties are almost exactly the same size as the middle linebacker. Moehrig has 47 tackles, good for 2nd on the team, with 9 passes defended and 4 interceptions, which leads the team. Gaines has 34 tackles, 1 sack, and just 1 pass defended (an interception). Scott has 27 tackles and 6 passes defended, with no picks.

At the cornerbacks, there are two seniors, Julius Lewis (5-10/180) and Jeff Gladney (6-0/183). Gladney is a pass defending fool, 12 on the year, but only 1 interception, while Lewis only has 5 tackles on the year. Again, not sure if there’s an injury situation, but that’s not very many tackles or stats overall.

Last week it was a slug-fest with Baylor and TCU and there were some decent plays, but overall, this was a game that was similar to Texas Tech’s in that it was low-scoring and only really looked decent was because of the overtimes. TCU’s defense is definitely stout and it is the same one that you’ve known so well. The defense is ridiculously fast and they took advantage of a Baylor quarterback that just doesn’t have a ton of arm strength. Jett Duffey certainly showed that he can make multiple throws and I think a lot of what happens in this deal is Duffey not turning the ball over and I’d imagine that the TCU defensive masterminds want to force Duffey to do what he did 3 weeks ago, which is give up the screen passes and give nothing up over the middle.

Something that has almost always happened is that the TCU defense has almost always been the one defense that has made Texas Tech quarterbacks look absolutely silly. Whether it be Graham Harrell as a senior (FN 1) or Patrick Mahomes as a junior (FN 2). That doesn’t mean that Texas Tech can’t win, but the full compliment of the offense has to show up. I’d also hope that SaRodorick Thompson is healthy and ready to go because I think that he’s going to be needed.

FN 1. Harrell only played TCU as a sophomore, and was 23 of 47 for 204 yards and no touchdowns or picks. I was there for that game in Ft. Worth and it was a beating.

When TCU Has The Ball 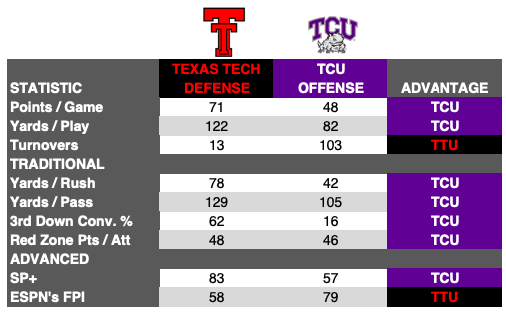 At quarterback it’s an OR, but the starter is actually freshman Max Duggan (6-2/190) who I think has started the last few games and has played in every game. Dugan has thrown for 1,545 yards, completing 56% of his passes, for 6.4 yards per attempt, 13 touchdowns, and 7 interceptions. A couple of splits for you, but Duggan has a QB rating of 130 at home with 9 touchdowns and 4 interceptions and 113 on the road with 4 touchdowns and 3 interceptions. Should also mention his completion percentage drops 11 points, from 63% at home to 52% on the road. Duggan just isn’t as effective, 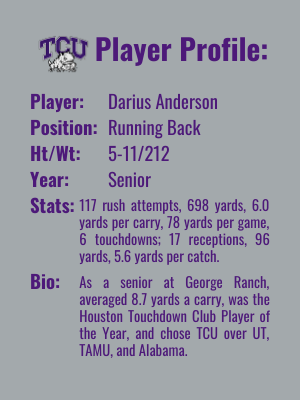 Duggan is not careful with the ball, at least not recently. Against Oklahoma State and Baylor, Duggan threw 3 interceptions each game and just 1 touchdown for each game. In fact, TCU is -7 in turnovers over the last 2 weeks and in -4 in turnover margin over the last 2 weeks. TCU has been an okay rushing offense, good, but not great. And maybe I should state that during the first half of the year, the Horned Frogs were very good: 200 yards, 346, 236, 319, 108, and 228. But the last 3 weeks, TCU has been just okay, 162 yards, 163, and 168 and averaging about 4 yards a carry (FN 1).

Freshman Jordy Sandy is the starting punter and he’s a freshman and what most freshmen do is punt 38 yards a punt and that’s what he’s done on 44 punts over the year and about 5 a game. Jonathan Song is the kicker, without incident on extra points and is 17 of 18 on field goals, his only miss coming between 40-49 yards. That’s pretty terrific. Song is essentially automatic. This could be a special teams battle for the ages.

Statistically, there is no reason why Texas Tech should win this game. All of the things that TCU does well, are things that Texas Tech does poorly or just does it better. It’s kind of ridiculous. The main area that Texas Tech has an advantage is at the turnover battle, which TCU just turns the ball over more and also produces more turnovers. Despite all of that, I’m predicting another double-digit win for Texas Tech, 31-21. I think the turnovers are key and I don’t know that TCU and Duggan has solved them and I’m riding high after last week.