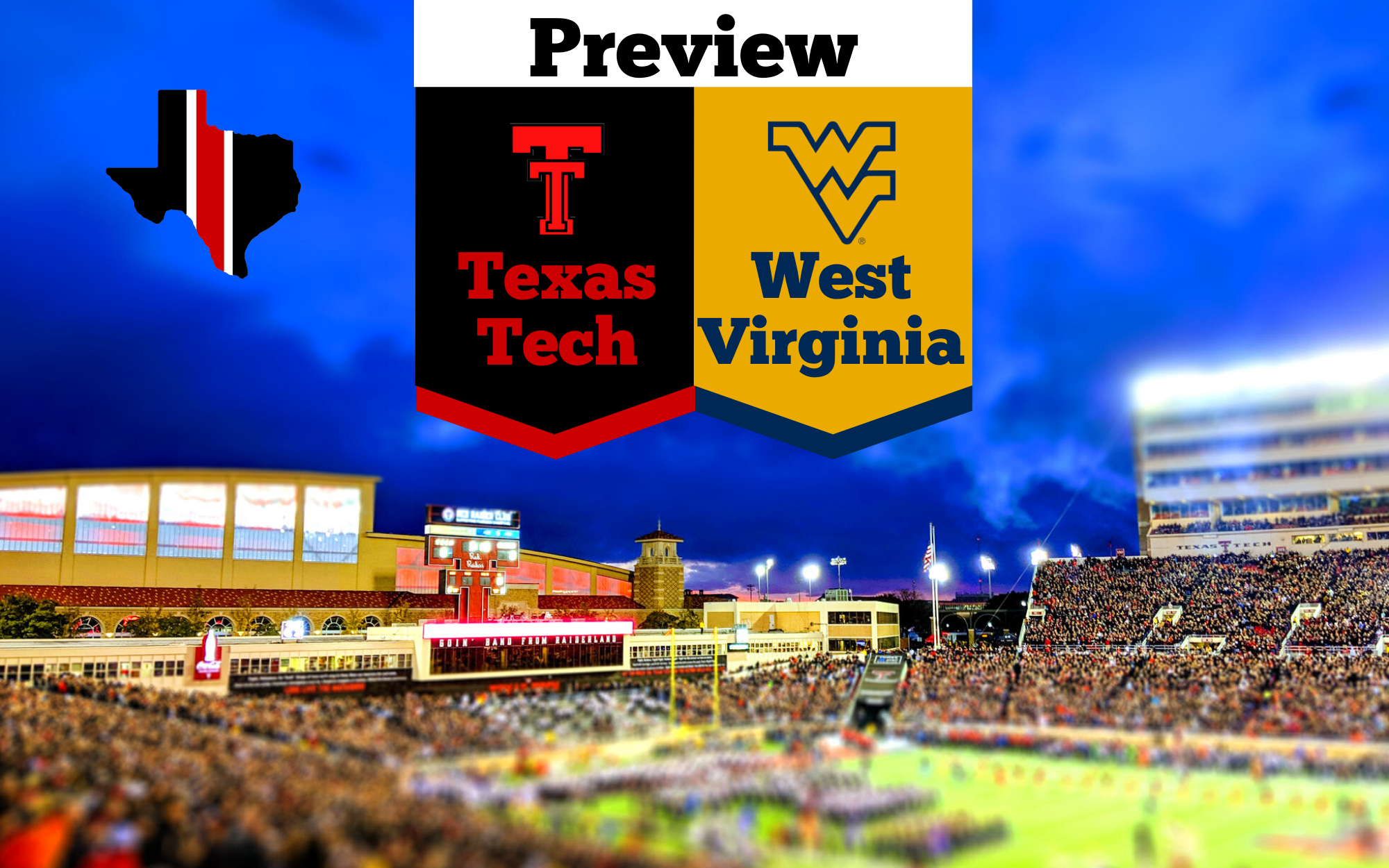 Thoughts on a 3-5 Season. We’re wading into some fun territory to discuss a 3-5 season thus far. Things that have been previously discussed by some fans:

Let’s try to tackle some of these, so let’s start with the coordinators. When I was originally remember this, I thought that when Matt Wells was hired part of the deal was that the coordinators would have two-year deals. I was wrong. Via Lubbock Avalanche-Journal’s Don Williams reminds me that David Yost and Keith Patterson each have three-year deals for $600,000 per year. Whether you like it or not, the coordinators are not going anywhere (most likely). I suppose we should all reserve a spot in our brain if someone moves on, but the likely scenario is that both Yost and Patterson will be your coordinators for the next two years.

Regarding firing the head coach into one year probably isn’t fiscally responsible for this teamYeah, I don’t think this is going to happen so I don’t even know why this is something that’s discussed. Wells was given a 6-year deal and to bail out 1 year in would be an economic disaster and just not realistic. I’m always open to figuring things out, but this one isn’t really an option for monetary and continuity perspective.

I think that realistically, if you don’t give a football coach four years then you’re really not giving the coach an opportunity to build the program. That’s the trajectory that the program is on and there’s no reason not to do that.

I would say that the best thing that the recruiting is improving, and it had gotten about as bad as it possibly could in 2018. This is the Big 12 recruiting rankings by Rivals and 24/7 Sports from 2015 up until the current rankings for the 2020 class.

As you’ll note, in 2018, the recruiting year before Kingsbury would be fired, he had the worst class in the Big 12. The 2019 class is really the combo-class between Kingsbury and Wells, it’s always difficult to attribute that class to any one person, Kingsbury’s staff did most of the work, but Wells signed them. For the 2020 class, and I’m not counting anything until signing day which is in just a few weeks, Wells and his staff have at least got the class into the 6th of 7th range with the hope that it improves.

And even nationally, the recruiting had reached new lows (or highs, depending on your perspective).

Just in case you were curious, the 2018 class was one where nationally, Texas Tech was 73rd and 72nd respectively. I’d be careful to just look at star rating without a comparison to other programs. This is an offseason project, but if Texas Tech is recruiting the 70th or so best class and Kansas is recruiting the 80th or so best class, then there’s not a lot of difference between the quality of player. Not only that, but the reality is that we know for sure that Kansas finished higher than Texas Tech in the 2018 class, so is it absolutely unrealistic to think that Texas Tech would lose to Kansas on the road? In other words, maybe the talent difference between the two programs isn’t as great as we’d like to think and that’s kind of sad to consider, but it may be a reality.

Firing the football program into the sun? Well, I still get a tremendous sense of joy from doing what I do and I have this sometimes insufferable website that can drive people to love and hate (which is odd). I think I’m partly insane for continuing to show up day after day writing about football, but here we are. You’re reading this so you’re just as complicit as I am!

After a somewhat light week last week, 4 teams with a bye, things somewhat have picked up this week with just 2 teams with a bye. The TCU vs. Baylor line sure does look funny, especially considering how thin TCU is at quarterback and that offense appears to be an absolute mess. I don’t know if that’s Cumbie’s deal or if Patterson is tough to work for, but that offense is rough (as I type this, TCU has the 42nd best offense according to SP+ and Texas Tech is 40th so stones get thrown). I think the line is a little high for the Sooners and I think I’ll take Kansas State and those points. 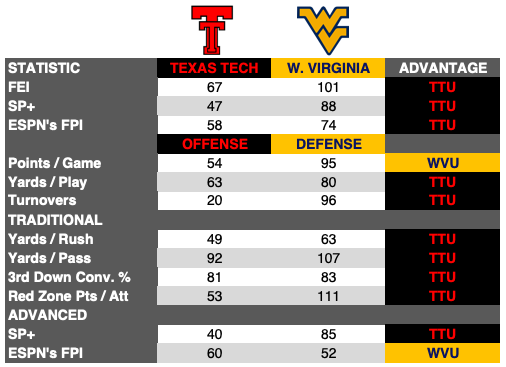 West Virginia is pretty banged up. Prior to the game, safety Noah Guzman, defensive tackle Dante Stills, and linebacker Josh Chandler were all injured, but it looks like all three will actually play.

We talked earlier in the week that the defensive line is really stout and terrific. Darius Stills (6-1/292) is the leader of the group with Reese Donhaue (6-4/285) and Dante Stills (6-3/295) being two of the tackles, with Jeffery Pooler, Jr. (6-2/255) starting at defensive end. The Stills brothers are really the best players here, Darius has 32 tackles, 12 of them were tackles for loss, and 7 sacks, while Dante has 17 tackles, with 8.5 of them for a loss and 6 sacks. That’s pretty terrific. 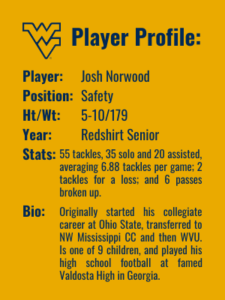 Personally, I think that the defensive numbers are good individually, but overall West Virginia isn’t great defensively. They’re 84th in total defense, and 80th in yards per play, 107th in yards per pass attempt, and their best stat is yards per rush, sitting at 62nd in the nation. the other things that are issues is that West Virginia doesn’t get teams off the field either, 81st in allowing third downs converted. Also, when you get down into the red zone, you can score on Wet Virginia as easily as you can score on Texas Tech essentially, with the Mountaineers 111th in red zone points per attempt and 104th in scoring (FN 1).

Like every other team, West Virginia plays significantly better at home, only allowing 374 yards at home and 453 on the road. That’s a 75 yard difference. Maybe the biggest item is that at home, WVU allows 6 yards a pass at home and 10.5 per attempt on the road. So, the odds aren’t well stacked for Texas Tech, but maybe

FN 1. Maybe being in the 80’s ranked defensively is fine, just fine for the Big 12 and certainly better than where Texas Tech is, which is one of the worst defenses in the nation.

When West Virginia Has The Ball 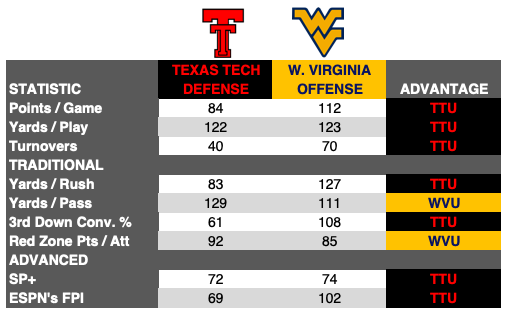 The offense also has injury concerns. Prior to the game, running back Kennedy McKor, wide receiver T.J. Simmons, guard guard Chase Behrndt were all injured and Simmons is doubtful, but the rest all all likely to play.

Austin Kendall (6-2/210) is the quarterback, but I have doubts about how long a leash he has to continue. Seth Doege is the back-up with Jack Allison annoucning his intent to transfer. It would not surprise me if Doege played or replaced Kendall. And Kendall hasn’t been bad, but he’s struggling a bit, completing 62% of his passes, 6.3 per attempt, with 12 touchdowns and 8 interceptions. Last year for Bowling Green where Doege started all 12 games, he completed 62% of his passes for 6.8 yards an attempt, 27 touchdowns and 12 interceptions. 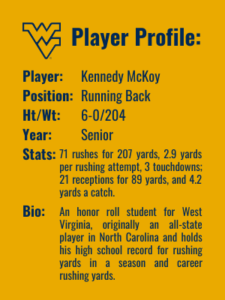 West Virginia isn’t really much of a running team any more. Leddie Brown (5-11/212) and Kennedy McKoy (6-0/204) are the main running backs, averaging 3.5 and 2.9 yards a carry and 200 yards for the year. For comparison purposes, they’re 60 yards behind Tz’Zhawn Henry who has 265 yards on the year. Where the running backs get a bit more looks is catching passes out of the backfield, McKoy has 21 catches for 89 yards, averaging 4.2 yards a catch.

FN. 1 Maybe this is why Holgorsen left. He knew that the depth and overall talent wasn’t good and decided to get out while the gettin’ was good. West Virginia is solely relying on transfer quarterbacks which means that there were none heading down the pike. That’s always a bad sign of program continuity, unless you’re Oklahoma.

FN. 2 Kelby is the son of offensive line coach Joe Wickline, where I cna’t quite figure out where Wickline is coaching right now.

There’s no real logical reason for me to pick Texas Tech here. West Virginia is on a current 5 game winning streak, including a 48-17 win in Lubbock in 2016 and essentially touchdown+ wins over the past two years. At this point, I don’t have any reason to be realistic or to accurately predict a win or a loss so I’ll pick Texas Tech to win. I think that Texas Tech is better offensively, has a better quarterback who I don’t think is close to being replaced, like for West Virginia, a better running game, despite the 2nd leading rusher going down for the year, and is generally healthier. The defense is the problem and with West Virginia being an offense that is truly struggling, I hope that the defense shows up to some extent and doesn’t make the Mountaineers look like world-beaters. Texas Tech 35, West Virginia 24.