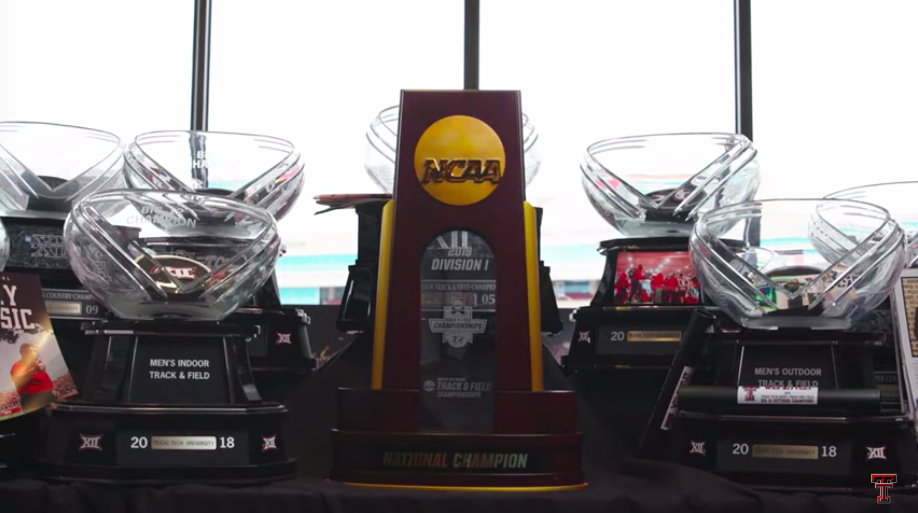 Texas Tech nearly had a situation where they had to split a Big 12 title once again. We need to stop doing this.

What a wonderful feeling winning a title is. Knowing you’re the best out of a division, conference or league is a great feeling, and should be a feeling that no one else should have to share with you. Unless you’re in the Big 12 and other major conferences across the NCAA.

The Red Raiders soccer team nearly were in that position last week. If Baylor would’ve tied against Oklahoma State (the game ended up not being close), the two would have split the conference title, despite the Red Raiders handing the Cowgirls a loss in Lubbock. If you defeat the team, you’re a better team.

Now, this has nothing to do with the participation trophy argument or anything like that, but it should be simple. If you have a better record or have the same record as someone and defeated them, you should be the stand alone champion.

I mean take a look at some of the Big 12 titles Texas Tech has won the past few years. Texas Tech Baseball had to split a Big 12 title with TCU, despite winning the series against the Horn Frogs 2-1, which included a 21-3 mercy rule beatdown. They received the No. 1 seed in the conference tournament, why can’t we apply that to the regular season title?

Last year, the Red Raiders had to split a Big 12 title with Kansas State. Although basketball teams play each other twice, and Texas Tech and Kansas State split their match-ups between each other, everyone knew the Red Raiders were the better team. They got the No. 1 seed in the Big 12 tournament, Bill Self said there was no doubt Tech was better, and the Red Raiders made it five rounds further than the Wildcats.

It’s happened to other schools too, not just Texas Tech. Baylor and TCU were vying for a college football playoff spot five years ago. Big 12 didn’t want to name either to champion, which caused neither to miss the playoff. Baylor won the head to head and should have won the conference.

As far as football is concerned, the Big 12 has already fixed this. The top two teams face off now in a championship game, so if there’s a tie, they can battle it out for the conference championship. But other sports have not done it yet.

Every professional league I can think of has some sort of tiebreaker in place to settle difference and declare winners. The NFL and NBA has long list of tiebreakers to decide a winner and seeding. The MLB had a final game to decide divisions or wild cards. The EPL goes by goal differential then goals scored.

For sports like basketball, soccer, softball and baseball, where you face each an odd number of times (permitting weather), the winner of the match should win the tiebreaker. If’s there a tie in soccer, make it like the EPL tiebreakers.

If in baseball or softball a game gets cancelled and two teams end up splitting their series, make it like the MLB and do a winner take all game. If that doesn’t work, go by whoever goes further in the Big 12 tournament, that way teams might take it more seriously.

Either way, we need to stop this splitting conference titles. For a conference that once had the slogan “One True Champion”, they sure don’t live up to it sometimes.