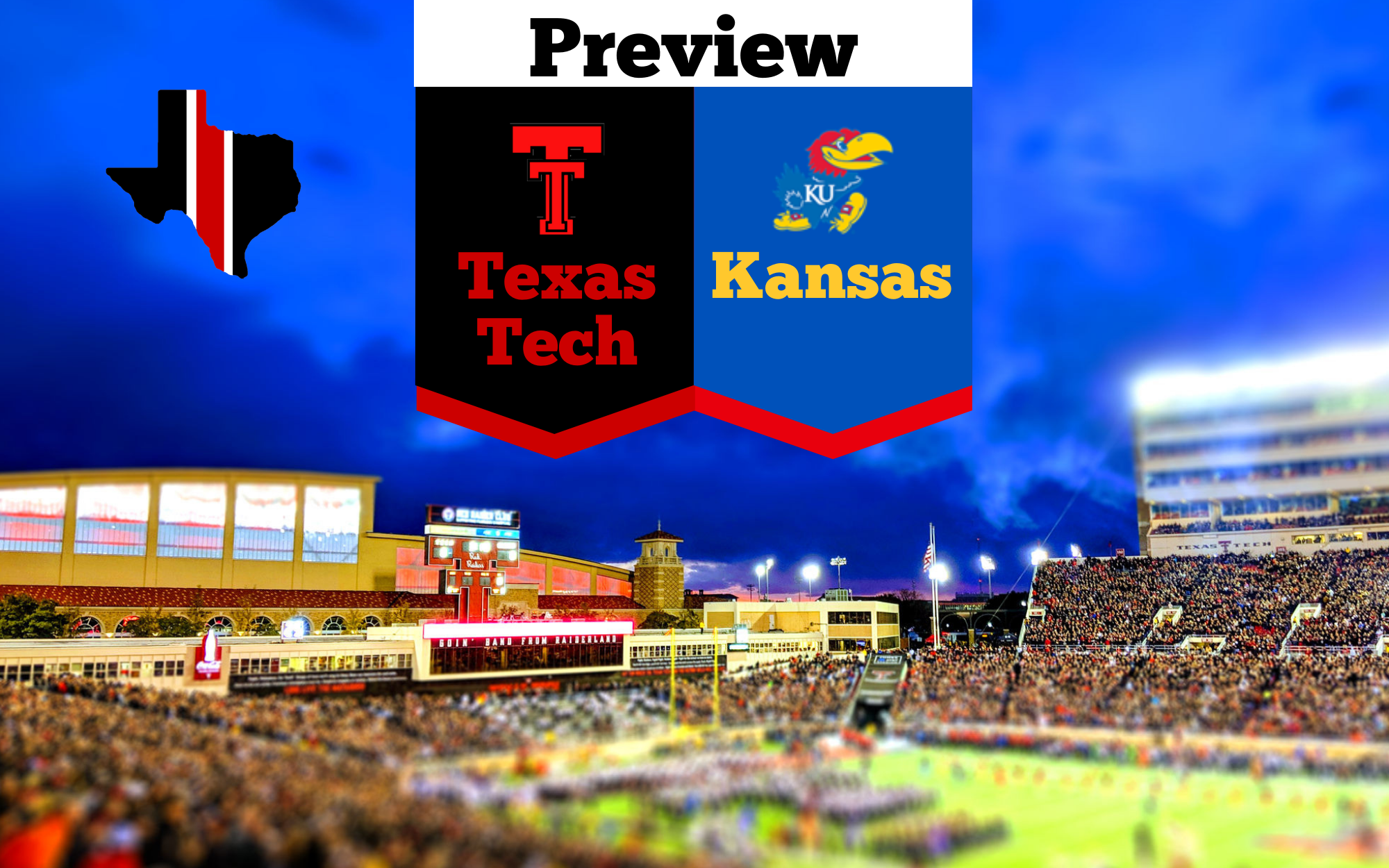 I still don’t get that Texas line, which may be -3 at this point, but I don’t understand how Texas can only be a field goal at best favorite at TCU. And it’s not as if TCU has this awesome home crowd, I’d expect a pretty heavy Texas lean.

I’m also a bit surprised at the 10.5 line at Iowa State against Oklahoma State, but I think ISU is on a roll and OSU is clearly not on a roll. The final game on the slate is a near 24 point line in favor of Oklahoma against Kansas State, but I wonder if K-State will slow things down in order to keep that line down. Not only that, playing in Manhattan always seems to slow things down a bit, even if Bill Snyder isn’t around. 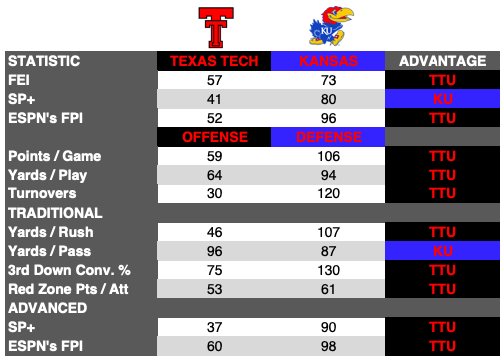 Kansas runs a 3-man front with Jelani Brown (6-2/290) manning the middle with Darrius Moragne (6-7/265) and Malcolm Lee (6-5/285) bookending at the defensive end spots. None of these three are actually getting to the quarterback very much, Moragne leads the way with 2.5 sacks, so I’m guessing these guys aren’t getting a ton of plays. 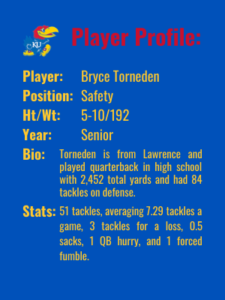 The four linebackers are led by Azur Kamar (6-4/235) is is your rush end with Najee Stevens-McKenzie (6-3/215) at the strongside, Dru Prox (6-1/215) at weakside, and Kyron Johnson (6-1/230) in the middle. Bryce Torneden (5-10/192) is your hybrid safety / linebacker that Kansas calls the Hawk. Torneden is the leading tackler on the team by a fairly large margin, 51 tackles on the year and that’s what he does. He makes tackles. Kamara has 4 sacks on the year, but he only has 5 TFL on the year, while Stevens-McKenzie has only half a sack, but 5.5 TFL. Prox has 2 sacks and 2.5 TFL. The point of all of this is that the linebackers are getting to the quarterback just a bit, but not a ton. Kansas overall is 68th in sacks, so about the middle of the road.

The two cornerbacks are Hasan Defense (6-0/193) (FN. 1) and Corione Harris (6-1/180). Mike Lee (5-11/175) mans the field safety spot and Jeremiah McCullough (6-0/190) is the boundary safety. Defense leads the team with 5 passes defended, but no interception. McCullough has 4 passes defended and Mayberry has 3. Not a high interception team, only 89th in the nation and 4 picks on the year. The Jayhawks are on a bit of a streak as they’ve had an interception the last two weeks, so maybe they’re turning the corner.

Texas Tech should feast on the Kansas defense. Statistically, they’re just not very good and have not been good, but a lot of this has to do with Jett Duffey making some plays and connecting deep because they appear to give up the deep ball. The difference for Kansas at home and on the road is fairly significant, only 200 yards in the air at home and 300 on the road. Of course, who has been played is significant and the one troublesome item is that Oklahoma only passed for 277 yards at Kansas, but they were 20 of 29 and averaged 10 yards an attempt with the other home conference game being West Virginia only passed for 200 yards and 5.5 yards an attempt. The relatively terrible TCU offense was able to put up 300 yards and 11 yards an attempt against Kansas (admittedly it was in Ft. Worth), but that’s a pretty terrible offense that was on fire. The key here? There will be opportunities deep and I still think that this is Duffey’s biggest problem, going over the middle, just over the linebackers and in front of the safeties. I’d love to see some improvement there.

And teams are running all over Kansas, giving up 4.5 yards a carry and 200 yards rushing just at home and in terms of wins/losses, the Jayhawks give up nearly 240 yards a game in losses and 190 in wins, so there’s a slight difference, but teams generally run on the Kansas defense. I would like to see a heavy dose of the three-headed monster of the Texas Tech running back group and I think the running game has been significantly better of late and that makes sense because the offensive line has had time to gel and figure some things out with some new parts. In fact, for the first 7 games of the year, this team has run over 100 yards and the lowest output was the Arizona game where Texas Tech only ran the ball 25 times. Since that time, Texas Tech hasn’t had fewer than 34 carries. And even when Texas Tech was maybe struggling a bit, i.e. against Baylor where the Red Raiders only ran the ball for 3.4 yards a carry, Texas Tech still ran 43 times.

When Kansas Has The Ball 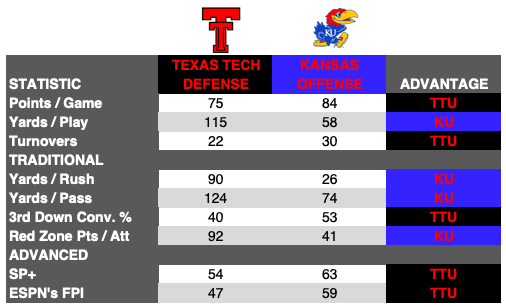 Quarterback Carter Stanley (6-2/198) is the most important player on the offense because he’s in charge of making so many decisions and he does that very well. Stanley is the only quarterback who has taken a snap this year and has thrown for 1,485 yards, completing 63% of his passes, and averaging 7 yards a pass with 16 touchdowns and 4 interceptions. That’s a lot of touchdown passes for the Jayhawks. 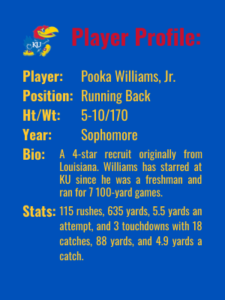 You could probably have some arguments that running back Pooka Williams (5-10/170) is the most talented player and maybe the distinction is most important vs. most talented between him and Stanley. Khalil Herbert is the second leading rusher, but he left the team earlier in the year. Velton Gardner (5-9/180) is the back-up running back and I think Texas Tech recruited him. Kansas does employ a fullback, the starter being Ben Miles (6-1/242) (FN. 1). The best way to explain Williams is that he’s slippery and he’s really fast, probably the same type of speed of Hubbard at Oklahoma State. Williams has run for 635 total yards and averages 5.5 yards a carry with just 3 touchdowns.

At the receiver spot, Andrew Parchment (6-2/180) is a JUCO transfer who has immediately made an impact with Stephon Robinson (5-10/180) and Daylon Charlot (6-0/193) being the other starters. Kansas does employ a tight end, Jack Luavasa (6-3/25), but he’s not overly involved offensively. I’d say that based on the completion percentage, the Jayhawks are catching a ton of passes and doing really well. Parchment has 35 catches for 505 yards and 5 touchdowns with Robinson has 24 catches for 336 yards and 4 touchdowns. Charlot is the third leading receiver and has 18 catches for 220 yards and 2 touchdowns. The key appears to be that the Kansas receivers all average double-figures in terms of averaging receiving and anywhere in-between 14 and 12 yards a catch. So they’re not burners, but reliable and get nice chunks of yards.

I was very concerned about Hubbard and Oklahoma State and I do think that Williams is similar. Texas Tech has had a real tough time stopping opposing runners, since the UTEP game, Texas Tech has given up 314, 201, 219, 173, and 182 yards. The lowest output in terms of limiting actual production and it was against Oklahoma State where Texas Tech limited Oklahoma State to less than 4 yards a carry, but the Cowboys still ran for 219 yards. I don’t know that Texas Tech can really change who they are defensively, I think this is a team that’s going to give up a ton of yards, but the offenses that Texas Tech has played has been very good.

But Kansas is also very good offensively and since they made the change in the bye-week in the offensive coordinator spot and that seems to have made a difference. Kansas employs a ton of RPO’s, so expect to see a ton of them. I think that’s problematic for most defenses and I’d include Texas Tech as well. It freezes defensive backs and linebackers and opens up those deep plays.

And this is the problem, which is that Texas Tech is giving up 9 yards a pass, which is 122nd in the nation. The Texas Tech defense is giving up a ton of yards in the air and allowing huge completions and that is a huge problem.

I’m legitimately worried about stopping the Kansas offense and I think you should be too.

I’m predicting a Texas Tech win, but I’m not expecting a dominating win. Kansas is a different team with a pretty potent offense and I’m concerned about Texas Tech keeping pace. Of course, this also means that I have concerns about the Texas Tech defense because, well, they give up a ton of yards and give up a ton of points. If this game comes down to a track meet, I’m not sure I like Texas Tech’s chances. That’s totally depressing and of course, I’m concerned about an offense that is on a shuffled offensive line and the third pick at quarterback.
_________________