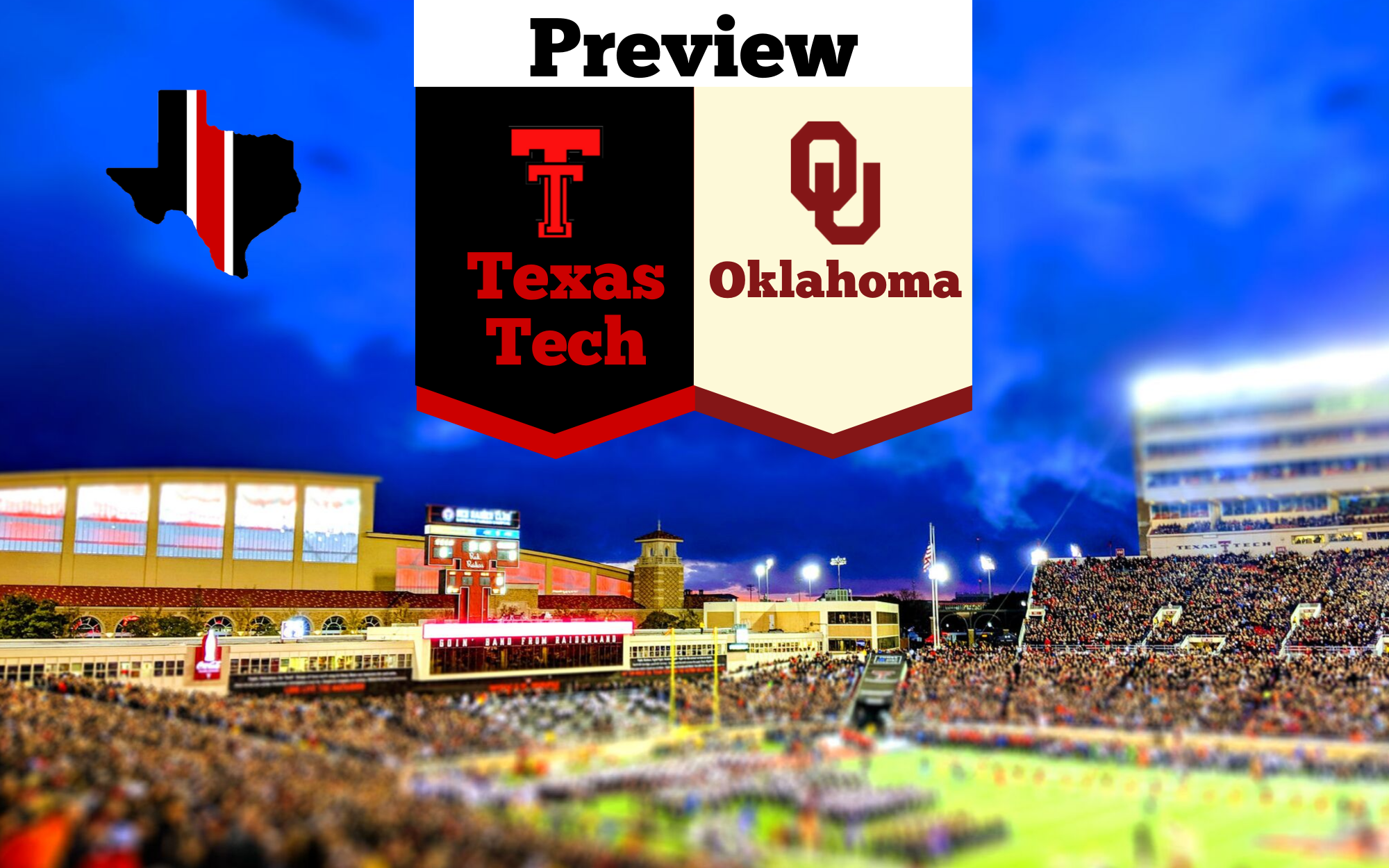 A Different Reality. You ready for mimosas and Bloody Mary’s? Me too! And just think, this will be a warm-up for next weekend in Lubbock to host Oklahoma State. I tend to go back when we talk about these two teams, an alternate history where Texas Tech hires Ruffin McNeill as the head coach rather than Tommy Tuberville and brings along Lincoln Riley as the offensive coordinator. How the history books would be so different if that had happened. If’s and but’s is that that is and that doesn’t have anything to do with Saturday.

By all accounts, Riley has led a charmed life since becoming the offensive coordinator for Oklahoma and deservedly so. He’s been absolutely terrific as an offensive coordinator and equally as good as a head coach. I think that with Kliff Kingsbury moving onto the NFL, that Riley is the de-facto quarterback whisperer for the college ranks and that is a moniker that will probably serve him well. The only knock thus far that is starting to take place is that Oklahoma is the destination for transfer quarterbacks and it may be more difficult to recruit high school quarterbacks. That’s not happening yet, but we’ll see. I don’t know that Houston’s D’Eriq King will actually transfer to Oklahoma, but if he did then I think that signals to the quarterbacks that they may not have a spot any longer. But I think that the quarterbacks in-waiting will get their turn next year and this topic will be moot.

Big 12 Boomerang. Don’t even ask why I’m using boomerang. It’s a good word. Let’s just go with the flow. Right now, there’s not a clear leader other than Oklahoma. The close win for Baylor over Rice didn’t seem to affect the rankings all that much for Baylor and this weekend’s game against Iowa State in Waco should be terrific. West Virginia and Kansas played a tight game, but the better team probably won and now Kansas gets to go play the Whining Patterson’s of TCU, who could not figure out how the SMU fans got to the lower bowl by the end of the game (hint, the TCU fans left early).

My favorite conference match-up for me is the Oklahoma State and Kansas State game. We’re about to see if K-State is a lit as they’ve looked thus far. And I really like Spencer Sanders, the quarterback for OK-State, I think he’s going to be a good. 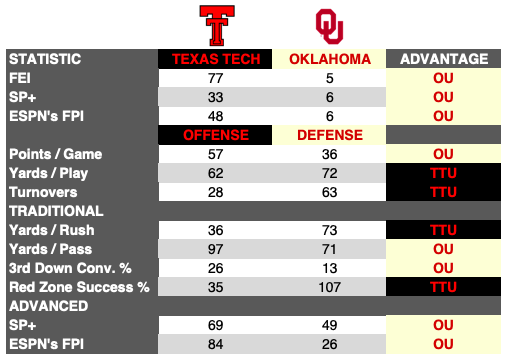 I’m not sure about the Oklahoma defense, but I’m more unsure about how the Texas Tech offense will look against the Oklahoma defense. Texas Tech’s poor performance against Arizona causes me to pause for concern and if the best quarterback had such issues against a less than mediocre defense, I’m not sure what Jett Duffey and Jackson Tyner will do offensively. I think that Duffey is, by far and away, the better quarterback, but that’s just an opinion and earlier this week both head coach Matt Wells and offensive coordinator David Yost said that Duffey and Tyner will both play.

The obvious play here is that the offensive line needs to be absolutely fantastic. Their play was less than stellar two weeks ago and I’m most disappointed in how that position group doesn’t appear to be dictating the tempo or getting after opponents. Wells said that there’s some things that are just missing with the line, but I’d just love to see a more physical offensive line. 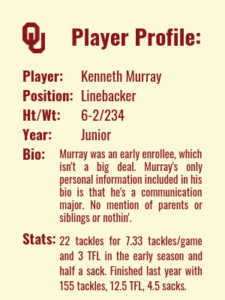 I personally don’t have an issue with the three running backs and I think if Texas Tech wants to win this game, the running game and offensive linemen will need to be dominant and be able to much things up in the middle. The quarterbacks will need to pull the safeties off the top a bit to maybe pull a defender away from the line of scrimmage, but I’d venture that the OU defensive coordinator will be hesitant to do that until proven otherwise.

Oklahoma essentially runs what Texas Tech runs, which is 3 down linemen, 3 linebackers, and 5 defensive backs. One of those linebackers is a rushing linebacker, while the 5th defensive back is more of a nickel back, not necessarily a hybrid linebacker or safety (at least this is what their depth chart is rolling out). The star of the defense is linebacker Kenneth Murray (6-2/243), a junior who can be wildly inconsistent, but definitely makes plays. Murray leads the team with 22 tackles and that’s by far and away the leader.

The three down linemen starts with Neville Gallimore (6-2/301) in the middle with LaRon Stokes (6-4/267) at tackle and Ronnie Perkins (6-3/248) at defensive end. Gallimore and Stokes aren’t necessarily gaining a lot of stats, while Perkins does have 9 tackles, 2 TFL, and a sack thus far this season.

The other two linebackers in addition to Murray are the weakside linebacker in DaShaun White (6-0/224) and the rush linebacker is Jon-Michael Terry (6-3/233) or Nik Bonitto (6-3/23). It appears that all of these guys have received playing time, and I don’t know that any of them are really staring over the other. White has 7 tackles, 1.5 TFL and a sack, while Bonito has 9 tackles, 1 TFL, and 1 sack, and Terry has 6 tackles, 1 TFL, and .5 sacks. Without doing the math, I’d say that Oklahoma’s defense is on the light side of most defenses. The defensive end is pretty light in the grand scheme of things and the rushing linebacker isn’t necessarily big either.

FN 1. This gives you a bit of insight as to how even the smallest ripple makes OU headlines as freshman receiver Trejan Bridges asked the coaches if he could help at safety. Of course this happens all of the time, but articles were written about how because this happened, this is damning evidence that the prior staff did not recruit well at all defensively. The problem is that Lincoln Riley has been part of that staff for three recruiting cycles and of course I think the easy thing is to blame Mike Stoops but I don’t know that anyone deserves blame here. Oklahoma is under a huge magnifying glass is the big takeaway from me and even the seemingly insignificant bit of news gets blown out of proportion.

When Oklahoma Has The Ball 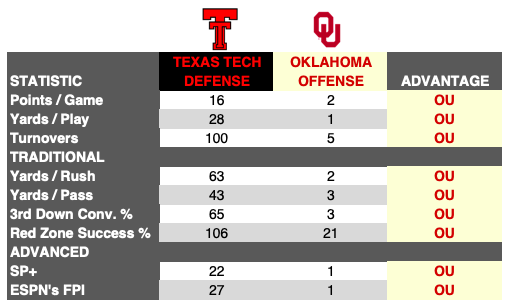 Watching the highlights it appears that so much of what happens is communication break-downs and wide-ass-open receivers just jogging through the secondary. A lot of that has to do with Hurts being able to scramble out of pretty much any situation and make a positive play out of it and the offensive line being pretty darned good. Hurts is more of a runner than Patrick Mahomes was and is built to take hits, but Oklahoma relies on being innovative and deceptive on offense and when the traditional parts work well, then the offense hums. And I don’t mean deceptive in that they try to hide the ball, but they’ll dial up plays that look one way but then run a completely different way on game-day and hence the wide-ass-open receivers. Just watching some of those plays against UCLA seem like the UCLA defense wasn’t trying, but I think that’s a credit to Riley dialing up plays that confuse defenses. 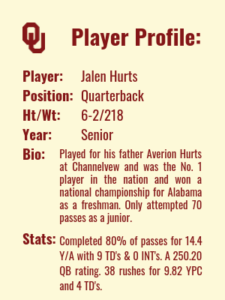 I think this starts with the defensive line for Texas Tech and if they can be disruptive, then maybe, just maybe, that pressure affects Hurts. I don’t know that he’s really been under pressure as an Oklahoma quarterback and I don’t know that Texas Tech has defensive linemen that really pressure the quarterback so Keith Patterson is going to have to be a bit innovative himself to apply that pressure.

Part me thinks that Patterson may employ the same type of shadow defense that Jordyn Brooks was asked to do against Arizona’s Khalil Tate, but with Hurts. Maybe Patterson mixes up who shadows Hurts and that’s part of the confusion, let it be a combination of Brooks, Evan Rambo, and Douglas Coleman. The more Hurts is guessing, perhaps the better for the Texas Tech defense.

Quarterback Jalen Hurts (6-2/219) is not really just a straw, but the blender that not just stirs, but crushes, mixes, and smoothly blends your drink. He’s a one-man show for Oklahoma and although the competition hasn’t been anything to write home about, he’s been absolutely stellar offensively (FN. 1). If there was a better adjective, I’d use it. Hurts has nearly 400 rushing yards and has lost a handful to sacks, but to lead the team in rushing is impressive and if it isn’t obvious enough, Hurts is going to run the ball and has 38 carries on the year, so about 12 carries a game. And Hurts simply does not miss as a passer, completing 80% of his passes and averages 14 yards per pass. So it’s not just deep, but it’s also incredibly accurate.

FN. 1 No offense to Houston, but I’m not sure how good or cohesive that team is and the UCLA team, despite scoring 50 points in the 2nd half to beat Washington State, appears to be a sieve defensively.

FN. 2 I am somewhat surprised how skinny Rambo is given that he’s been part of the program for two prior years to this year and am guessing he’s put on weight, but he looks pretty skinny on the field. He’s fast as heck so try to catch him, I get that, but would have figured he would have added some weight to that frame. He’d be darn near impossible to stop with 190 pounds on him.

Calum Sutherland (5-9/187) or Gabe Brkic (6-2/195) [as an aside, I don’t know that I’ve ever seen that combination of consonants together in a last name and find that interesting] are the kickers for the Sooners. Sutherland is just 2-4 on the year so he’s not exactly being highly utilized. Reeves Mundschau is the punter and averages about 40 yards a punt, but he’s only punted 5 times.

I’ve been very impressed by the Texas Tech special teams, for the most part. No gaffes in coverage really and the kicking and punting by Trey Wolff and Austin McNamara have exceeded my expectations. I think that Texas Tech could have an advantage here and I’d love, absolutely love an awesome special teams play where the Texas Tech offense doesn’t have to get all of the points.

Tallying things up, I think that Oklahoma has the advantage passing the ball on the Texas Tech defense, some of that is schematic and me still having some doubts about the Texas Tech secondary. They haven’t quite been tested yet, not like this, and we’re about to see some things (FN 1). I’d probably call it a push on the the Texas Tech run defense and the OU rushing game (sans Hurts), but Hurts is sort of the difference maker and not traditional in the sense he’s lining up as an I-back and running the ball, but he’ll still carry the ball 12 or 13 times a game and the team’s leading rusher. That’s just not fair.

Offensively, I have so many questions and we’re about to see how the offensive staff zigs when they’ve been given a zag. I think I’d give a slight edge to the Oklahoma passing defense over the passing offense for Texas Tech, but if Bowman were healthy, I’d edge that in favor of Texas Tech. For the rushing side of things, Oklahoma isn’t necessarily great, 241 yards to Houston, 70 to Houston, and 110 to UCLA. Maybe they’ve figured some things out defensively, but Houston averaged almost 6 yards a carry and the other 2 opponents had a shade less than 3 (FN 2).

When asked to give my prediction, the line was 25 or so and now the line is up to Oklahoma -27 to 27.5. That’s a lot of points and that’s a pretty big swing from the opening line. I think a 27 point line is pretty dangerous and I’d go under that, but 24 points, I’d take Oklahoma. Yeah, I think the OU offense is that good.

FN. 2 UCLA averages 2.7 yards a carry, which is what they averaged against Oklahoma.