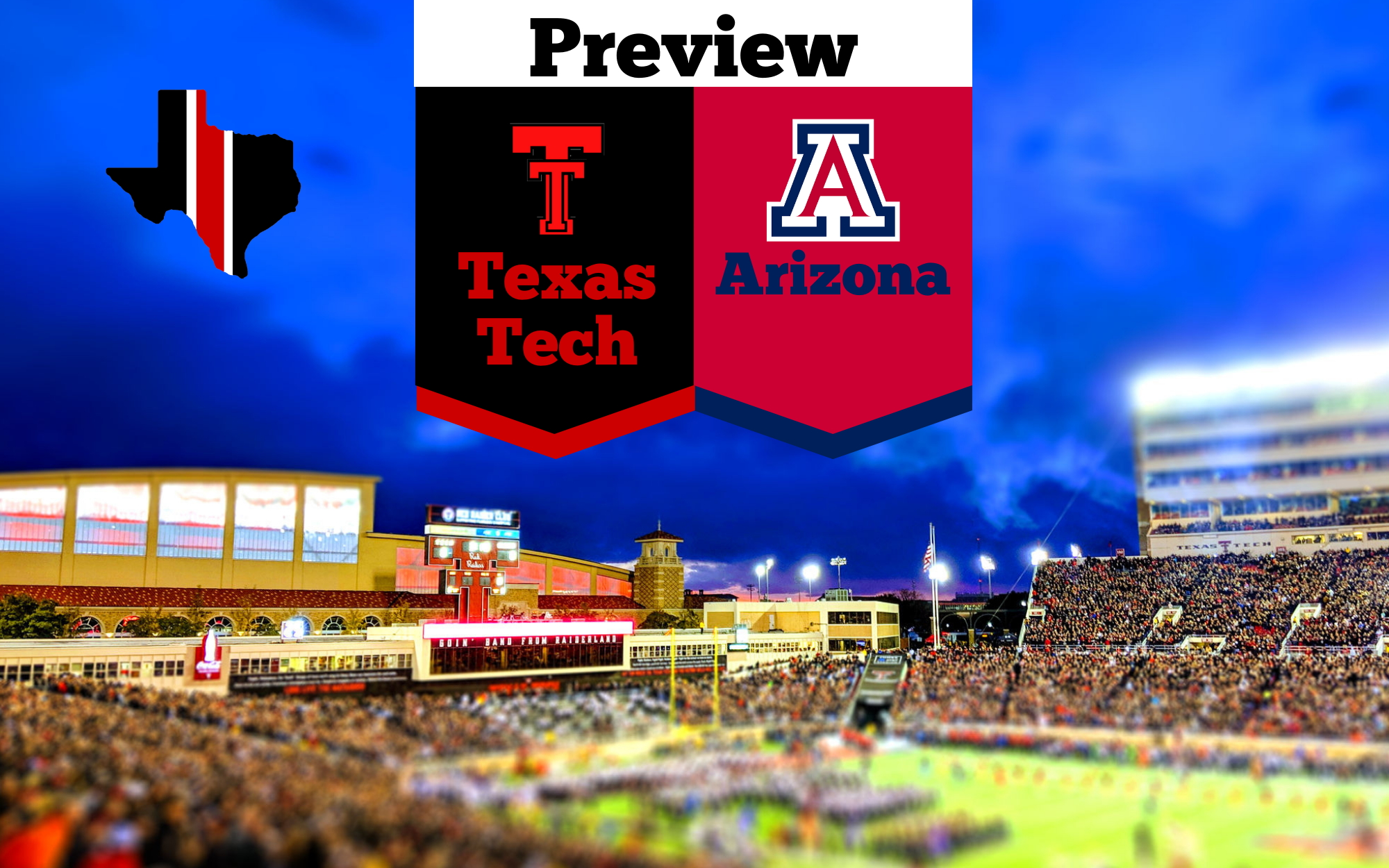 24-14.Texas Tech holds a 26-4-2 advantage over Arizona and the last time these two teams played back in 1989, Texas Tech winning 24-14. Your guy James Gray ran for 236 yards and had two touchdowns upsetting the then ranked No. 20 Arizona Wildcats. Lynn Elliott had a 29 yard field goal and Anthony Lynn also had a touchdown. Yes, that Anthony Lynn, current Los Angeles Chargers head coach.

Big 12 Round Up. You know me and charts and I thought a more robust preview each week is probably too much, but this is just about right in terms of time that it takes me to put it together and hopeful usefulness. A full-on preview does take too much time, but this at least gets you caught up in terms of what’s happening around the conference. 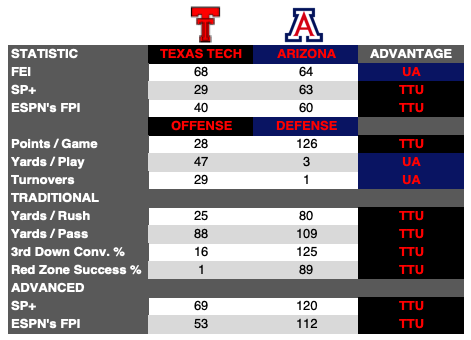 It is not readily apparent from looking at the very early 2019 stats that the strength of the Arizona defense is at linebacker, it is true. Colin Schooler has been a ridiculously productive player for Arizona for 2 years. Schooler was fantastic last year in that he had 119 tackles, for 9.92 tackles per game, 2 picks, and an astounding 21.5 tackles for a loss (FN 1). Really all over the field and made a ton of plays for the Wildcats. Tony Fields II (6-1/230) had 89 tackles, 4.5 tackles for a loss and 2 sacks. Not as productive, but still pretty good. 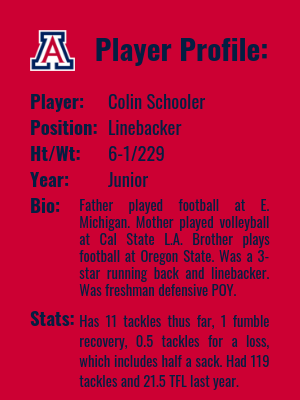 The defensive backfield consists of a Spur and Bandit, at Spur is Tristan Cooper (6-2/198) and at Bandit is Christian Young (6-2/217), so that’s two hybrid types, part safety and part linebacker and part safety. This is probably going to be a trend for the entire year. The other safety is the free safety in Scottie Young, Jr. (5-11/201).

There have not been a ton of disruptive plays by Arizona thus far and maybe that’s part of the problem. No one player has more than one pass break-up. Only 1 player has a quarterback pressure. Christian Young, Scottie, has 2 forced fumbles, but he’s the only one. Jalen Harris does lead the team with 2.5 tackles for a loss, while Pandy and Field each have 2, but that’s about it. None of this means that Arizona won’t absolutely won’t go off, but they haven’t done a ton defensively. So who puts the pressure on the defense? Historically, Schooly is the guy that I’d probably watch as he did it all of last year and was basically the Arizona version of Jordyn Brooks. I think that you probably watch out for Harris on the edge, but the line isn’t putting up a ton of havoc stats.

I think we’ll see Texas Tech continue to do what they do until they are stopped and it would probably be pretty smart for Arizona to try to test Alan Bowman’s arm deep. This is an area that Texas Tech struggled. I think that Vasher may be the only real match-up problem from a physical standpoint, while I think that OC David Yost and Bowman have done a really good job of taking advantage of the inside receivers. They are creating mis-matches that make them very difficult to cover.

When Arizona Has The Ball 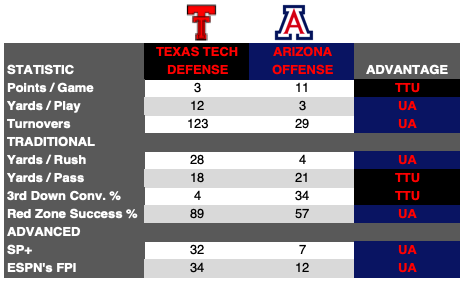 Arizona presents some really unique challenges because Khalil Tate is a much better passer than he was a couple of years ago. So he’s truly a triple option. In fact, i think that Arizona that Tate not actually run the ball at all, but the mere threat of Tate running the ball causes significant issues, teams have to respect that threat.

J.J. Taylor (5-6/185) is the leading rusher by far, 24 rushing attempts for 169 yards, averaging 7 yards a carry and has 2 touchdowns, while Gary Brightwell (6-1/210) has 5 rushes for 141 yards. Tate has toted the ball as well 15 times and he’s equally effective for 109 yards. Whoever is at running back, the Wildcats have a ton of other options other than Taylor or Brightwell. 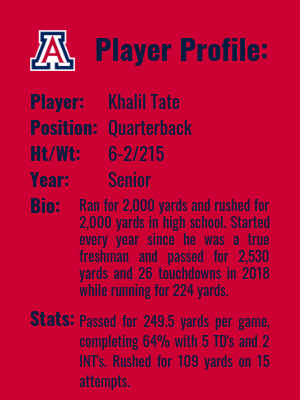 The Arizona offensive line is very good, they seem to do a really good job creating space, but Tate’s ability make it a bit easier because there’s always some sort of indecision on the defense.

It’s always a question for me how to stop an offense like Arizona because Tate can do so much and because he can throw such a beautiful deep ball. Tate averages almost 9 yards an attempt and he does have 5 touchdowns to 2 interceptions while completing 64% of his passes. Maybe a key component is that Arizona is only 48% in third down conversions, which ranks 33rd (FN 1).

I think the cornerbacks are going to be on high alert, they will be tested, and the defensive backs have not been tested really at all against Montana State and UTEP. Those quarterbacks were horrible, so any passing numbers given up thus far should be weighed greatly with the thought that Texas Tech has played two teams that just have not figured out how to pass the ball very well. Not this week, Arizona will run receivers vertical so they had better be ready to run. I feel pretty comfortable with the defensive line and the linebackers though, they’ve been tested well enough, but they haven’t been tested from the stand point having to respect Tate’s arm. That’s a pretty big distinction.

FN 1. The number of wonky numbers where the offense is absolutely incredible but the defense is terrible for Arizona is off the charts. So terrible defensively and so good offensively for the Wildcats.

Kicker Lucas Havrisik is most likely going to kick the ball into the end zone, a 71% touchback rate, and he’s only attempted 1 field goal. That’s maybe an indication of what Arizona likes to do, which is go for it. Punter Matt Aragon has had 5 punts and averages 34 yards a punt and the backup guy, Kyle Ostendorp averages 38 yards a punt, so the Wildcats aren’t very good there. For comparison purposes, Austin McNamara averages 48 yards a punt. That’s a full first down difference between Arizona State.

Keys to the Game

This is really a pick-em game for the most part, Texas Tech is favored by 2 on the road, so Vegas thinks that Texas Tech is a 5 point favorite on a neutral field (I think this is how that works). The line opened at 3.5 initially, but enough money came in on Arizona to swing the line by a point and a half. I took Texas Tech 41-38 in the Staking The Plains post that we do each week, so I think Texas Tech gets the win and beats the spread. But if you were to pick Arizona I wouldn’t blame you either. This is going to be a close game and I’m relying on the Texas Tech defense being significantly better than Arizona’s.