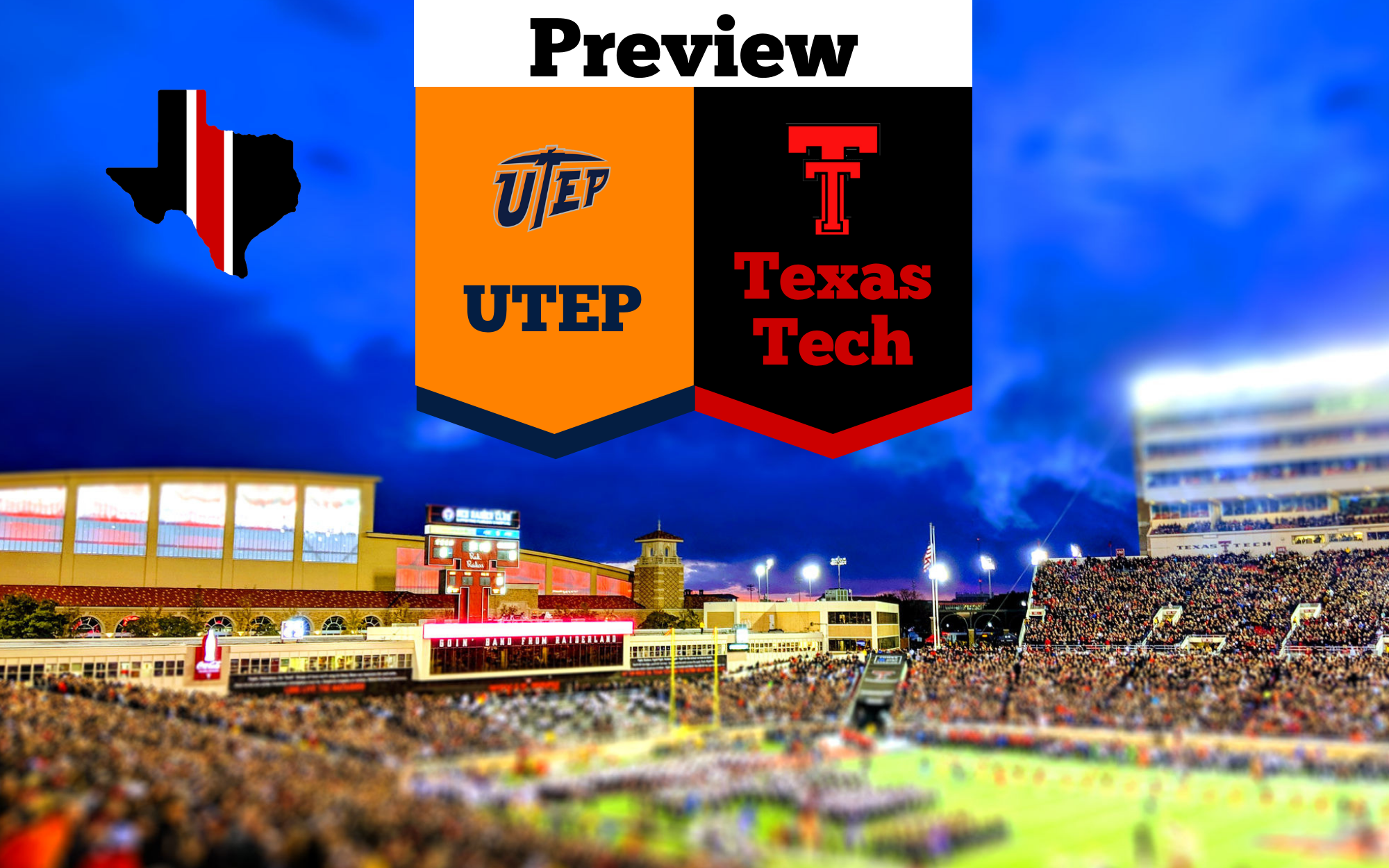 Odd. It is not very often when Vegas has UTEP as a bigger underdog than an FCS team in Montana State. Maybe this has more to do with Vegas being a bit unsure about what Texas Tech would be and how they’d handle the opener and maybe seeing how FCS teams that are ranked highly usually have decent results.

I had plenty of questions leading up to the game, not knowing how the defense would play against a running team, how the offense would really look against a real opponent. Given how the season ended last year, I simply wasn’t sure about what to expect. I didn’t know how the pieces would come together.

Around the Big 12. This is more or less for my benefit than anyone else. The surprises of the weekend was that Iowa State needed triple-overtime to beat Northern Iowa, 29-26. To have a triple-overtime game only be in the 20’s seem odd and must have been an absolute offensive debacle offensively and maybe David Montgomery was more important than we’d like to think. Kansas only beat Indiana State by 7, 24-17, and that’s probably not incredibly surprising, but the Jayhawks did have to rally to win. West Virginia beat a very good James Madison team, 20-13. JM is the #2 FCS team in the nation, and things were essentially 10-10 as the 4th quarter started, so it was incredibly close. Texas rolled Louisiana Tech, 45-10, Oklahoma State’s offense looked crazy-good as they won 52-36 in Corvallis. Baylor whipped up on SFA, 56-17, Kansas State dominated Nicholls, 49-14, and TCU defeated Arkansas-Pine Bluff 39-7. The Oklahoma offense is back as they scored 49 against Houston, but the defense also gave up 31.

This week, you get the following schedule: 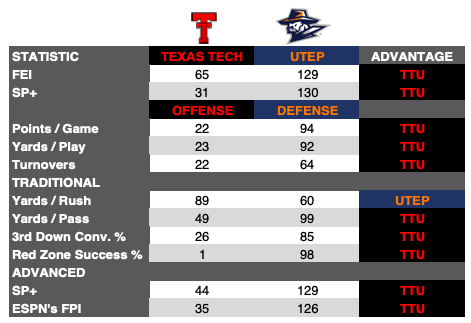 There aren’t a ton of defensive highlights from UTEP’s win over HBU, so it’s difficult to determine who to really watch. Rogers was the guy that caused the fumble at the end of the game to seal it for UTEP. It simply doesn’t look like there’s a ton of players for UTEP that have to be schemed against.

Of course, the defense wasn’t very good last year, really not good at all and I don’t see how they’ve improved significantly. they have really nice size along the line, Denzel Chukwukelu (6-4/290) and Chris Richardson (6-3/298) are both pushing 300 pounds, but that doesn’t mean a bunch. UTEP runs a rush end in redshirt freshman Praise Amaewhule (6-3/245) with Josh Ortega (6-2/285) rotating in and that’s your defensive line. The linebackers are already down a man, Jayson VanHook is your hybrid sort of player with JUCO transfer Joe Jay Smith (6-3/230) and Sione Tupou (5-11/240) getting the other spots (FN. 1). The three safeties are led by Justin Rogers. Michael Lewis (6-0/192) and Justin Prince (5-10/195) certainly have the size to make an impact, but they haven’t made a ton of plays. Duron Lowe (5-10) and Josh Caldwell (6-0/170) are your cornerbacks and Lowe is the smallest corner, with the backups ranging in the 6’0″ range for the most part (FN. 2).

Against HBU, Richardson, Amaewhule and Josh Ortega each registered a sack, and the safeties are really the guys who have to carry the load in terms of tackles.

And I don’t know how much the stats really matter here as UTEP didn’t play great competition, the stats look okay, giving up just 3.32 yards per rushing attempt, but Houston Baptist isn’t really a running team, thanks to offensive coordinator Zach Kittley being on the staff. The key for Texas Tech is probably that UTEP allowed 8.1 yards per passing attempt against Houston Baptist, which ranks 101st in the nation after just 1 game. If quarterback rating is your jam, then UTEP is 107th, so it would appear that the secondary is probably going to be susceptible to some passing yards. 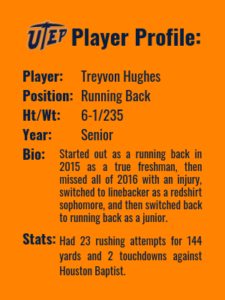 With UTEP not being incredibly scary defensively, it’s difficult to say where Texas Tech would need to attack. We were able to see how David Yost will attack a defense that likes to play two safeties on top, Yost and Bowman will simply take what the defense gives you and we get an idea that the inside receivers are good enough to make some plays. I thought Xavier White looks special and how he never had a scholarship offer coming out of high school surprises me. And that’s not a shot at Rigdon or Mannix, Rigdon played really well as a starter and in the stands there were times that I thought Mannix was a tight end because he just looked big out there.

I’d expect more of the same from the offensive running the ball, a heavy dose of all three running backs and the hot-hand probably wins out, no matter who it is. Re-watching the game, I was well impressed with the offensive line, thought that they blocked pretty well even though they were down a starter and flipped Bruffy to left tackle. Really impressed with Dawson Deaton at center.

FN 1. It should be noted that senior linebacker Kalaii Griffin had an arm injury against Texas Tech and is likely out for the year, with Joe Jay Smith to the strongside linebacker and Sione Tupou at middle linebacker.

FN 2. Will definitely watch where Lowe, #29, will lineup on Saturday and will be very interested to see which side of the offense he’ll be guarding as it would seem logical that T.J. Vasher would have a huge advantage over the top.

When UTEP Has The Ball 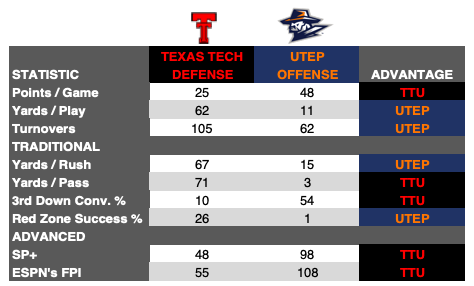 Quarterback Brandon Jones (6-2/210) led the offense and there was some thought that Kai Locksley would maybe get some snaps, that simply didn’t happen against Houston Baptist. I suppose that the opportunity would be there for that to happen, but it didn’t happen last week. Jones’ stats look very much like a K-State quarterback in that he only completed 50% of his passes, but he sure as heck made them count, averaging 13.4 yards per attempt, which is just sort of ridiculous. Jones also was the second leading rusher with 13 carries last week and if you take out his two sacks, he had a decent day running the ball.

The other headliner is running back Treyvon Hughes (6-1/235) who was really very good last week, averaging over 6 yards a carry, he’s a load at that weight, but the UTEP offense didn’t feature Hughes at all at catching the ball out of the backfield. Josh Fields (5-9/195) is your change-of-pace back and had 7 carries last week.

The offensive line features nearly all 300-pounders, the lone sub-300-pounder is right tackle Greg Long at 295, so there’s definitely some size there. UTEP does implement a tight end, Jess Trussell (6-5/250) a grad transfer from Purdue, or Trent Thompson (6-2/255). Trussell caught 1 pass for 3 yards last week.

I mentioned this earlier in the week, but there was not one receiver who caught more than 2 passes and the Miners essentially run out of 11 or 20 personnel from what I can tell, with 3 receivers, 2 wide and 1 inside. The two outside guys are Alan Busey (6-1/195) and Tre’Shon Wolf (6-0/170) (FN. 1). The inside receiver is Walter Dawn, Jr. (5-6/165), and this is not a typo, Dawn is 5’6″ which is so small, but would imagine that whatever he lacks in height, he’s quicker than all get-out. Wolf had 2 receptions last week, for 96 yards, so obviously, this is something to watch, probably some play-action and a huge play over the top. Busey had 2 catches for 57 yards, still pretty incredible to have such huge yards, but that’s the way this offense operated (FN. 2). 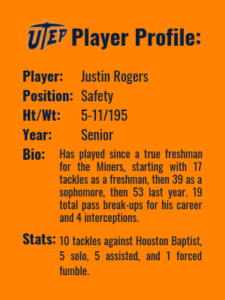 This may be a really terrific test for the Texas Tech secondary, keeping everything in front of them and not letting those big plays happen. I’m guessing that Jones is very hit-or-miss offensively, but when he does connect its a big one. I’d love to see the cornerbacks have some good games here and I am largely confident in DaMarcus Fields, Zech McPhearson, and John Davis, Jr. to make plays. I didn’t notice a ton of Desmon Smith last week, but Montana State wasn’t passing a ton. I think the safeties looked athletic and like they can run with just about anyone, but there’s a lot of football to be played before that can be a true statement. I do think that Patterson is trying to put some good athletes all over the secondary and I like that idea.

I couldn’t really determine how athletic the UTEP offensive line actually is, but with a lot of teams that are in UTEP’s position, you somewhat have to decide between having size or agility, but not both (this even applies to Texas Tech to an extent) and having an entire line of 300-pounders may mean that I think the more athletic defensive line of Texas Tech will have a distinct advantage and should be able to create some havoc situations. I thought that the Montana State offensive line, which was also really big, didn’t have an answer for the line. The biggest key may be that Texas Tech will really have to pay attention to containing the quarterback because he will run and is effective.

I would definitively state that I’m not worried about the linebackers and that’s largely because Jordyn Brooks and Riko Jeffers looked healthy and ready to play. I’m still uncertain about the back-ups, but that’s not something we’ll really know much about until/if something drastic happens.

FN 1. Busey is originally from Anchorage, Alaska, but from what I can tell played some JUCO ball in California and eventually found his way to El Paso.

There’s only so much to gleam from special teams after one game. The Miners only have 3 total yards in punt returns and no kickoff returns. If that ever does happen, then Walter Dawn would be the guy that does the returning. Gavin Baechle had 8 kickoffs last week touching back 6, while making all 3 field goals and all 3 extra points. UTEP also has an Aussie punter, Mitchell Crawford, who averaged 43 yards per punt last week.

There was that offensive lull for Texas Tech where true freshman Austin McNamara who had 5 punts and averaged 48 yards per punt. That’s pretty good, but need less punts. Trey Wolff kicked the ball off 8 times and touched back 5 with 1 out of bounds and he was 1 for 1 on field goals while making all 6 extra points. I did enjoy watching Adrian Frye try to return punts where it seemed that Kingsbury preferred not to take the chance with a return. Frye averaged 7 yards a return, while Ta’Zhawn Henry returned a kickoff once for 19 yards.

I can’t say that there’s an advantage over another here, it’s still pretty early. Head coach Matt Wells said that the special teams needed work, but I’m not smart enough to know what’s a missed assignment.

Keys to the Game

Transitive math says that Texas Tech beat Montana State by 35. UTEP beat Houston Baptist by 2. Therefore, Texas Tech should whollop UTEP and I somewhat believe that. The line hasn’t moved all that much, maybe half a point so Vegas feels pretty good about the line. I’ll take Texas Tech and the Red Raiders to win by 35+.