We left the DFW area around 4 or 5 and didn’t arrive in Lubbock until 2 in the morning. Situated the 5th wheel and probably went to sleep around 3. It is really important to me to get up and run on Saturday so despite getting only a few hours of sleep, I wanted some sunrise shots and I pushed out of the 5th wheel around 6:30 from parking lot S-1, which is near the John Walker Soccer Complex. I wanted to see what the new Raider Alley set-up was like and I had never had a sunrise shot of Will Rogers and Soapsuds. Mission accomplished.

The Raider Alley looked really nice. I didn’t get a chance to actually go when there were actual people there, but the set-up looked nice and most of the traffic was just to go through the campus, not to actually park. And the bus to and from the parking areas was pretty efficient and I liked how the buses were not picking up on campus.

So that was one of those keys in preseason, to be more balanced, 42% of those plays running, which was a slight increase to last year, but one game is not a sample size, just data at this point. At the game, I thought that the offense to start was really terrific and I don’t think that Montana State. I liked the 6.4 yards per rush, helped out significantly by the long run of Armand Shyne, but those count as well. Offensively, Texas Tech averaged 7.3 yards per play, and that’s a solid stat. Passing wise, nearly 8 yards per attempt were all very positive. The offense was faster than what we’ve previously seen even with Kingsbury, the lack of substitutions was evident and the intent early was to push the pace because Montana State had no answer for that.

I was also a bit curious about how the passes were spread out and here’s the breakdown:

I can go back to last year, but I felt like the running backs were more involved in the screen game than in years past and Montana State was playing a two-deep safety look for pretty much the entire game, so the inside and underneath stuff was going to be there all day. Part of the reason why Bowman didn’t look sharp deep was because that stuff wasn’t there. There will be teams that drop a safety down and then I’d bet that the wide receivers get more looks.

I’d also say that I was pleasantly surprised at how well the tight ends played. They caught some stuff down the field, blocked decently and played well from my end of things.

I don’t know if this section deserved a question mark, but the defense allowed 4.82 yards per play, which isn’t really anything great, 62nd with 1 game played. Before the game, I didn’t think that the Montana State offense was really anything to write home about and allowing 289 yards isn’t great, but isn’t terrible either. It could be better for sure. I was generally pleased and I thought that initially they were as sharp as the offense was when the game started. Third down stops and forcing punts are all good things. I thought the defensive line was really fun to watch and the linebackers were especially good. The defensive backs didn’t get a ton of time because MSU wasn’t throwing the ball deep except for trick plays.

This was a really clean game and that was a bit shocking. I know this will be considered a shot at Kingsbury but it is what it is in that there were only 4 penalties all game long and one of them was a delay that was meaningless. I don’t know if this is one of those things, where Bowman has said that the offense is more simple because there are fewer plays, so maybe there’s less to think about. It’s a simple situation when there’s really no snap count or there’s not a ton of time when Bowman is passing the ball to when the receiver has it, so there’s just not a ton of time. I like the idea that the downfield blocking was pretty terrific and no penalties there and no special teams penalties are also a positive. And I am trying to remember, but no defensive penalties. Playing aggressive, but playing within yourself and not over-reaching. Last year, in the opener against Ole Miss there were 6 penalties and against Lamar there were 14 penalties. Only twice last year, Oklahoma State and Kansas State, did Texas Tech have 4 penalties. Let’s watch to see how this happens.

So just talking about the game. Good start. Really good start to the game. I thought we came out ready to play on both sides of the ball. Hit a little bit of a lull there maybe in the about the middle of the third quarter. I would like to have finished it off at that point but I was proud of the way our guys responded. We got a lot of guys in. As the game went on in the second half, I thought a lot of guys stood out and there were a lot of good plays. You look at, first of all, defensively I thought Jordan Brooks was all over the place. But truth be told you win games and you win games consistently as a program with how you play up on the O-line and the D-line in the trenches. I’ll always believe that. I always have. You win in the front seven. Broad Rick Washington, Nick McCann, Eli, J-Boog, Yontz, Mbanasor, all six of those guys I thought set the tone early. Had some TFL’s early, had a big stop on third and short early, and I think that set the tone for our defense.

Offensively we ran the ball extremely well. Truth be told we would love to run the ball, that’s what we want to be about. Alan, I thought made some really good decisions tonight. He had control over the clock, showed some calmness and a poise and I’m proud of him for that. We caught the ball very well. But I thought our running backs ran hard, ran behind our pads. There’s some things that we need to clean up but overall a good first start.

Wells on the running and passing games:

Well, I was proud of the O-line. What did we rush for? 255, 40 carries, 255. Decently balanced, almost 700 yards total offense, the run sets our play action up. The ability for our O-line to run off, roll off the ball. We played six guys consistently up there, actually maybe seven. Zach Adams played a couple series at right tackle. Weston and Madison kind of rotated a little bit at left guard. But Dawson went for a while and Jack and Bruffy. Hats off to those guys. And I thought Travis Koontz and Donta Thompson blocked well. The addition of the tight end is — well, addition — addition to that in terms of what y’all are used to. But it’s part of what we do and I think it opens up more gaps, more run games, more run-game opportunities and Donta and Travis played well.

Wells on the secondary:

MATT WELLS: A little up and down. Had a couple missed tackles. We had a couple busts underneath coverage in rerouting some receivers. Those are more second-level defenders and it makes a third-level defender look bad. And so everybody probably thinks that the deep safety screwed it up and it’s really somebody underneath. So there will be some things that we need to clean up there, but I think okay. I thought, Doug missed a tackle but before that I thought he tackled very well. Damarcus, I thought before he went down, I thought he had a good game. Frye stood out a couple times, did a nice job on punt return. We got Ja’Marcus Ingram in there. I don’t know if you noticed, but Ja’Marcus played corner when Damarcus went out, he’s practiced at safety since the minute he’s been in here. The first time he lined up at corner was today. So I thought he handled himself very well.

Wells on the performance overall:

MATT WELLS: No, because we hit a lull in the middle of the third quarter. But, yeah, I mean there’s plenty to coach from in this room, Monday morning at 6:30. And we’ll go back to work. But I’m happy with our players, I’m happy with our staff. You asked me my mindset really the last 48 hours. Honestly, truth be told, I didn’t know what to expect. You’re coaching a team for the first time, under the lights and in front of fans, were we going to look like we had in our closed scrimmages and our practices? We were close to that. I’m proud of our guys. There’s been a lot of change since December the 1st. A ton of change for those guys. I’m proud of the way they have reacted to it. New ways to get ready for a game on Friday. Saturday morning I thought our guys handled everything right really the last 24 hours and we got to continue to make good decisions, but we’ll go right back at it. We celebrate all wins, we go right back at it Monday morning.

ALAN BOWMAN: We call it, tap them out TTU. So that’s kind of our offensive motto. So if anybody falls down for a cramp or taps their helmet like this that’s when we get all excited and kind of we want to go so fast where they can’t even stand up anymore.

On scoring a touchdown after the game is shortened to 14-7:

ALAN BOWMAN: We felt like the game was in our hands, obviously the score kind of showed a little bit differently, but just kind of just stay the course. We’re playing well, they haven’t stopped us yet, we stopped ourselves. So just kind of stay the course and figure it out.

On the passes being to the flats to start the game:

ALAN BOWMAN: I think he had four or five catches first drive. And just the defense that they were playing they just gave up that open zone. And then with Erik Ezukanma outside blocking, just getting the ball in the playmakers hands as quickly as possible and letting them get as much yards as possible.

Linebacker Jordyn Brooks on the new guys and working out:

JORDYN BROOKS: Knock on wood I don’t think anybody got hurt. Just getting us stronger. Going in I think we felt the best that we have felt since I’ve been here at least and that’s all that all goes to Coach Scholz and his staff and getting us prepared.

On the defensive line:

I’m not sure that I’ll always do this on the Ten Things, but given how late I’m getting this up, I figured why not. 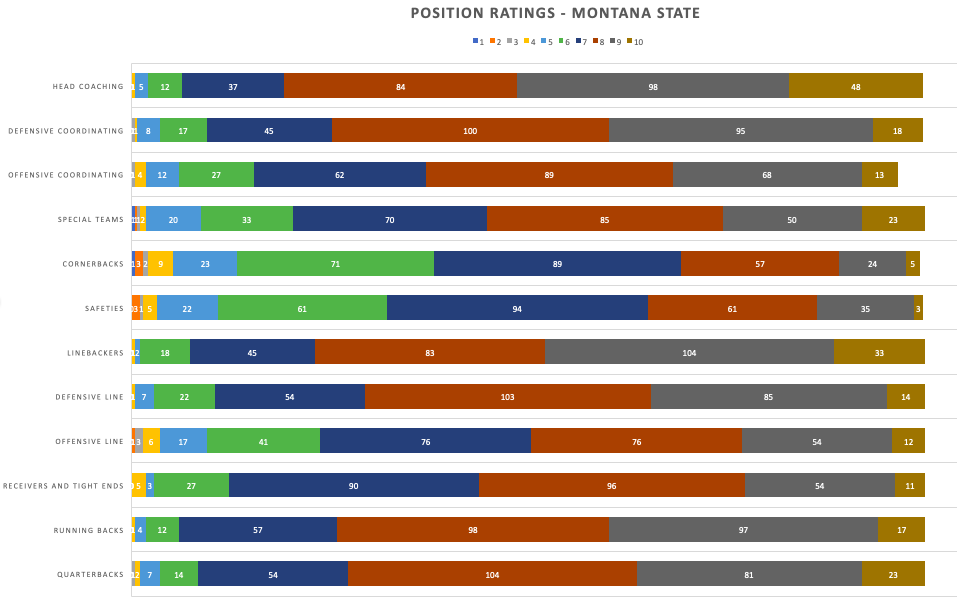 I was going to just crank this out on Saturday, but decided I wanted to re-watch the game to see if I saw anything different and I’m glad that I waited. Seeing it live, I thought that the lulls were more noticeable, but when watching it on the condensed game version, it wasn’t so bad.

Condensed game review is that the defense played really well and gave up, maybe 3 big plays where Montana State got their big yards, one of which was a trick play in the 4th quarter and I think there was a big run by a running back and another 1st quarter reception.

That was far from a perfect opener, but the lack of penalties, the quick starts for the offense and defense, those were all good signs and maybe signs of a team that’s going to play disciplined. And had Xavier White not fumbled at the goal ine, we might be talking about a 52-10 win, which looks just slightly better than the 45.