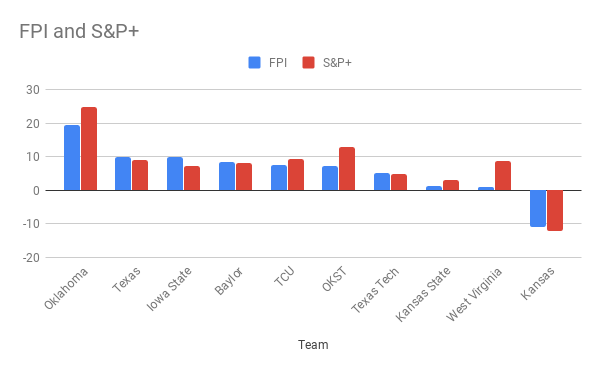 College football is right around the corner, and you know what that means. Fight songs, tailgates, highlight plays, and spreadsheets.

Last year I took an interest in college football analytics, mostly by referencing ESPN’s Football Power Index (FPI) for each and every college football matchup every saturday. I wanted something objective and mathematical to help form my opinions and outlook on Texas Tech’s season. I also wanted to compare analytical models to Las Vegas sports books to see if there was any way to beat Vegas.

I’ll be doing the same thing this year, and hope you’ll follow along. It will all be pretty similar to what I did during basketball season in my “By the Numbers” posts if you remember those. You know, the ones where I told y’all the super computers were saying Tech had a good chance to win the conference title, Twitter trolls told me I was stupid, then Tech won the Big 12 title? Good times!

I should add a disclaimer here: none of this includes my own predictions. It’s just consolidating all the analytical models into one place. So when the models say Tech is going to win and then Tech loses, ~I~ am not the idiot. The models and their fancy computers are the idiots, so you can direct your rage at them.

There are a few models I will reference throughout the season: ESPN’s FPI, S&P+, and Adam McClintock. I hope to also use FiveThirtyEight’s Elo model, but I haven’t seen anything from them for the upcoming season yet so I’m not sure what exactly will be available from them. All of these are public models except for Adam McClintock, who posts on Patreon (A very small contribution of $2/month gets you basic access to his posts).

Let’s start with how these models view Texas Tech and the Big 12 before the season kicks off, and I’ll have a follow-up article later on detailing how I use these models to inform fake gambling decisions if you’re interested.

FPI is pretty straightforward. They rank all 130 FBS teams based on their FPI score, which is the team’s expected margin of victory against an average team on a neutral field. Below is how the Big 12 stacks up nationally with their respective FPI.

For some added perspective about who qualifies as an “average” team in FPI’s model, know that Colorado is the last team with a positive FPI (0.3) and Appalachian State is the first team with a negative FPI (-0.2). They are 63rd and 64th nationally in FPI, respectively

FPI also has game-by-game predictions for the entire season, which obviously shift every week based on how each team performs. Here is Texas Tech’s individual game outlook for the season per FPI. Tech has four distinct toss-up games, at least according to preseason projections: Arizona, Oklahoma State, Iowa State, and TCU.

Using FPI’s probabilities above, one can roughly calculate the probability that Texas Tech would finish with any possible season record. Like I did during basketball season, I’ll provide the odds Texas Tech finishes with any record that has better than a one percent shot of happening.

According to those figures, there is a 75.3 percent chance Texas Tech finishes somewhere between 5-7 and 8-4, which sounds pretty reasonable. Any worse or better than that range seems fairly unlikely, though I’m open-minded to being pleasantly surprised. There is also a 74 percent chance Tech will earn a bowl bid by winning six games or more according to these figures.

It’s also worth noting that this early in the season, with so many possible outcomes, any one individual outcome is relatively unlikely. Needless to say, this will get clearer and clearer as the season goes on.

S&P+ is another commonly referenced analytical model in college football. It uses past performance, recruiting, and returning talent as predictors for success. You can read more about this model here.

Back in February, S&P+ ranked every team headed into the 2019 season. It’s worth noting since then, there have inevitably been transfers, injuries, etc. that could impact this but to my knowledge a more updated version has not been released. An S&P+ score is the same as an FPI score; it is the expected margin of victory against an average team on a neutral field.

In S&P+’s model, the example of an average team is Southern Miss, which has a perfectly average S&P+ score of 0.0.

The chart above shows each Big 12 team, in order of FPI with their S&P+ ranking, just to help you visualize how the two models compare to one another. The major differences seem to be with Oklahoma, Oklahoma State, and West Virginia, all of which have an S&P+ rating 5-7 points higher than their FPI. Just my two cents, but a common thread there is that all three have new quarterbacks.

I wonder if S&P+ is taking for granted prior quarterback play at those schools, or if FPI is undervaluing each team’s ability to replace that production with new talent that has been brought in. In fact, now that I say that, teams with a solidified starter returning at quarterback (Texas, Iowa State, Baylor, Texas Tech) all have higher FPI scores than S&P+. There might be something to that…

Adam McClintock (@cfb_professor on Twitter) is not as well known as FPI and S&P+, but his model has been about as accurate over time. He has not released a full 130-team ranking based on his model, just a top 30 for now. One component of his model is “roster talent”, which he has released rankings of for everyone in the Big 12. In the table below is each Big 12 team in order of roster talent (again, this is only one component of the model) and where the model ranks them overall nationally if they’re in the top 30.

As far as expected win totals, FPI is the only model that includes that right now from what I can tell. They predict Texas Tech will finish with 6.7 wins and 5.4 losses. The total exceeds 12 because of the chance (however small) that Tech plays a 13th game in the form of a Big 12 championship bout.

In Las Vegas, the betting over/under for Texas Tech’s season win total is 6.5, so six or seven wins appears to be the baseline expectation for this team according to the analytics and the oddsmakers.

Like I said earlier, if Elo adds college football projections at any point this season, I’ll include those in these posts every week too. If you’re interested in sports gambling, keep an eye out for a post about how I use these analytical models and measure their performance against the oddsmakers in Las Vegas.