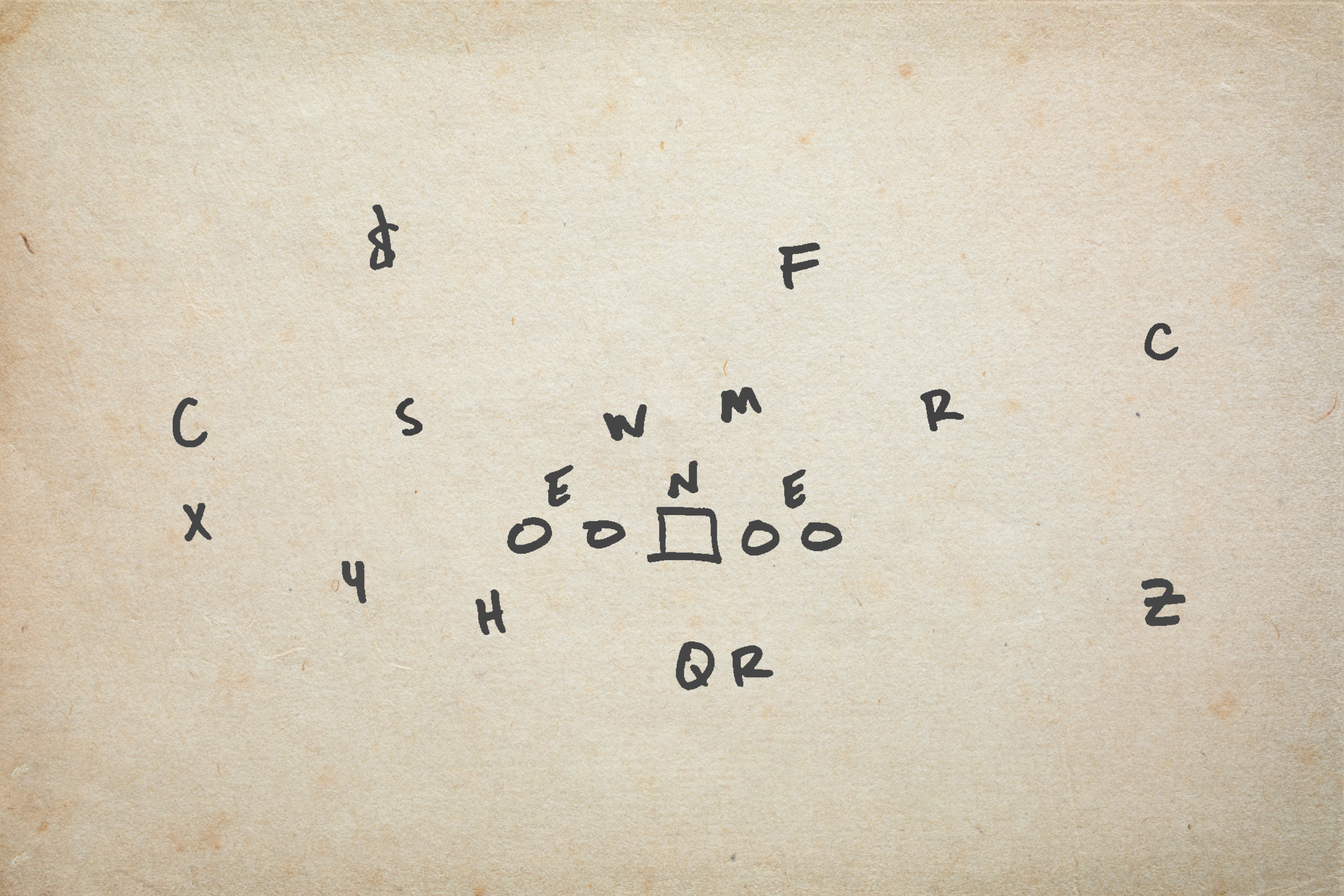 I wrote an intro to Keith Patterson’s defense back before spring ball started – you can read that here.

You can see a typical alignment of this defense in the featured image that accompanies this post (S=Spur, R=Raider, $=Safety).

Patterson prefaced his defense like this in his introductory press conference:

One of the first things we talk about with our players, we are very multiple on the front end and back end, we are multiple with minimal teaching, it has to tie together, it is critical when you are that multiple, players have to be students of the game… it varies where I am, I don’t like to plug a circle into a square hole, I have to evaluate the kids here, I think they have been very similar to what we’ve done, sometimes it looks like a 3-4, a 3-3-5.

…the spur position, he’s about 60% DB and 40% linebacker, that particular position has more DB skills, our boundary linebacker position [Raider], possesses more of a defensive end or pass rush up front type compared to about 40% defensive line so they are different even though they are both outside backer positions, it is still 3 down lineman, 3 linebackers, and kind of a hybrid and 4 DB’s

Since that last article, we have heard quite a few updates on personnel for the hybrid positions, as well as defensive backs. Don Williams released a projected depth chart last week. I compared my projections to his and we agree. He definitely copied me. /sarc

I’m not sure if/when an official depth chart would be released, but Matt Wells mentioned this most previous scrimmage would be “Evaluation Saturday,” followed by “Decision Sunday.” Game prep is just around the corner.

The Raider will set the edge and will typically be the first sent after the QB. At Utah State, this position was primarily manned by Tipa Galeai (transfer from TCU). Galeai is listed at 6-5/230. He logged 10 sacks and 13.5 TFL last season. He also forced 3 fumbles, caught 2 interceptions and returned one for a TD. This position will be the one to watch if you’re looking at one guy on the defense – he should be the primary havoc maker.

The Raider will also be the sub out when the defense needs a 6th defensive back, although I did see Patterson sub out one of the down defensive ends and slide Galeai over as a stand up DE several times.

The Spur is the hybrid linebacker safety player, skewing more towards a coverage defensive back.

Patterson isn’t tied to a specific body type here as you can see in the guys he mentioned above, and also looking at the athlete who played this position for the Utah State Aggies – Jontrell Rocquemore 6-1/210.

From what it sounds, this is Evan Rambo 6-4/220 and Quincy Addison 6-1/195. Rambo is the linebacker/safety transfer from Cal and Addison has on campus for a couple of seasons now. Rambo is a perfect fit to be the Spur as he played both linebacker and safety during his career at Cal. While Patterson may not have a preferred body type, I like Rambo’s size for this type of position.

Across the board, we’ve seen Patterson be aggressive. After last week’s scrimmage, he talked about the corners squeezing routes, getting over top and just forcing takeaways.

Patterson does not have a strong or free safety (despite what I have listed on the graphic).

we are positionless as a safety, you’ve got to have cover guys back there

With that, they are still trying guys out at all of the defensive back positions. Adrian Frye 6-1/195 was mentioned as being what Patterson is looking for in a safety, but that he could also play corner. Another corner we’ve heard was moved to safety is Doug Coleman 6-1/200 – Coleman and Frye are your likely starters. Previous updates from the players and staff included Thomas Leggett 6-0/200 and Adam Beck 6-2/205 with the safety group as well. Patterson said that with the abundance of corners on the roster and possible sub packages, don’t be surprised to see 4 corners on the field plus a safety.

I am working on a part 3 that will publish soon that will look at how the defense works and some of its weaknesses.