Good Times. Another win for Texas Tech baseball and the Red Raiders get to keep playing.

First Pitch. In all honesty, I think the rangers could have used Kittley’s arm yesterday.

After seeing this, the @Rangers asked if I’d start on the hill for them tonight.

I told them I’d love to but I already need some ice after one pitch! pic.twitter.com/kzxH7qMRyU

Congrats to Sandy Scott and incoming freshman Ludvig Aberg for advancing to the round of 32 in the British Am. #WreckEm pic.twitter.com/W3vQbMCg4c

Texas Tech 4, Florida State 1. Texas Tech has essentially advanced to the final four teams as the Red Raiders defeated Florida State 4-1 to send the Seminoles home and now Texas Tech will need to defeat Michigan twice, playing tomorrow and if Texas Tech wins then they’ll play the Wolverines on Saturday. 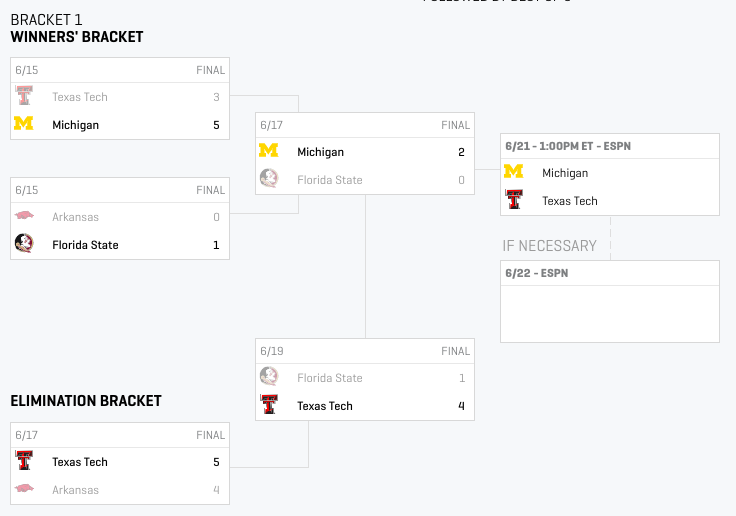 The junior second baseman, who was unable to make a play at second in the first, made up for his fielding gaffe by hitting a solo, go-ahead home run in the sixth to push the No. 8 Red Raiders to a 4-1 win over Florida State at TD Ameritrade Park.

“I thought I had a little bit of power in there somewhere, so I’m glad I got a couple out,” Klein said of his two home runs in the CWS, including on Wednesday. “I might not have one every single game, but looking forward to just do my best to put the barrel on the ball and just keep putting together good at bats for my guys.”

When head coach Tim Tadlock arrived in Lubbock, Tech had no College World Series appearances. The idea of getting to Omaha seemed so distant, and the chances of winning a national title seemed like a pipe dream. But after terrific pitching performances from Bryce Bonnin and Taylor Floyd Wednesday night, Tech is now two wins away from playing for a national title after beating Martin and the Seminoles, 4-1.

“I’m just really proud of Bryce Bonnin and Taylor Floyd,” Tadlock said. “Those guys threw the ball awfully well, and kind of gave us an opportunity to hang around and score some runs and plays good baseball. Those guys really went out there and threw the ball really really good.

In the back of your mind, obviously, you’re thinking about ’11’ a little bit, and all the respect in the world for him. I love him, and just appreciate everything he’s done for college baseball.”

“Obviously, it’ll be very exciting,” Dean said, “just because you know that this is a goal he’s had for a long, long time. It’s going to become very real tomorrow night. He’s going to know where he’ll have the opportunity to go play next, and I know he is excited for that opportunity.”

Dean watched the dream take shape longer than most. In Junes past, Culver started coming to Dean’s Coronado basketball camps while in elementary school. As a freshman, he helped the Mustangs’ junior varsity go undefeated.

Culver played three years on varsity, and after the first, Dean switched him from off-guard to point guard. The coach who last week was inducted into the Lubbock ISD Hall of Honor wanted the ball in Culver’s hands as much as possible, be it to handle the press or run the offense against changing defenses.

Culver Profile. NBC Sports’ Rob Dauster, who I think is one of the best college basketball writers on the planet, has a terrific profile of Jarrett Culver. Go read the whole thing, but here’s a bit:

But where Culver improved the most during the offseason was with his ability to operate ball-screens. He obsessively studied tape during the summer to learn the proper reads and proper passes to make when running a ball-screen, and the improvement showed. He forced teams to have to stop going under the screen against him because of his ability to step-back and make off-the-dribble threes. He can throw one-handed, live-dribble passes to shooters in either corner. He turned Tariq Owens into a serious threat on the offensive end of the floor with his ability to hit him on lobs while also knowing how to create the space and passing lane for a dump-off.

Dauster also has his final mock draft and has Culver going #5 to the Cavaliers.

Shoulda. Rivals’ Eric Bossi goes through some of the possible draftees of the NBA Draft and goes back to why he didn’t rank certain players, including Jarrett Culver:

Lesson learned: There’s a few lessons learned. Place more value in initial gut instincts about a player and when a guy “falls off” or struggles, do a better job of following up to see how they have bounced back. I’m not saying we would have ranked him high enough, but he’s a guy we should have at least put into the final rankings.