Beckie Playing for Canada. Former Red Raider footballer Janine Beckie with the terrific corner for Canada in the World Cup!

NEENER WITH THE PERFECT CORNER!

Congrats to Josh Jung and Cameron Warren on earning 𝐀𝐥𝐥-𝐀𝐦𝐞𝐫𝐢𝐜𝐚 honors from @BaseballAmerica! 🎖🎖

Highlights. At the time that I posted yesterday morning, there were no highlights of the 8-6 finale over Oklahoma State. You can just inject this into my veins.

Game 1 Set. The first game of the college World Series is set for Saturday, June 15th against Michigan at 1:00 p.m.. Arkansas aand Florida State are also in Texas Tech’s bracket and they play after Michigan and Texas Tech. 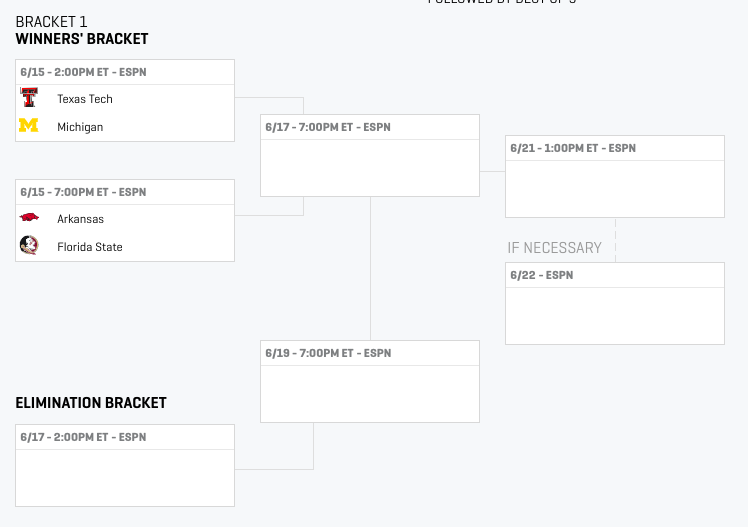 Davis in Myrtle Beach. Former Red Raider baseballer Zach Davis is in Class A ball with Myrtle Beach as part of the Cubs organization and Davis is doing well, learning how to switch hit, but he also tells about how he almost didn’t finish playing baseball for Texas Tech:

He was told there were too many outfielders on the team and, given that he was a walk-on, he was not as high priority to stay on as others might be. Tadlock told him that he would be happy to call other schools and give them a sparkling review for a transfer or even asked if he wanted to run track in Lubbock, but Davis said no; he wanted to stay and play baseball or nothing else.

“I love Tech,” Davis said. “I would go back right now. It was the best time of my life. When I was told I was going to get cut, I told him I like the guys who are here, I like the coaching and everything. If I were to get cut, then I get cut and I’ll be in the stands watching the games.”

So, Davis was ready to hang up his cleats and move on in a post-baseball life. That was until a couple days later when the team’s starting centerfielder left the program, opening a roster spot.

From there, he was propelled by his love for the game to find a new role with the Red Raiders. He would enter the game in the eighth or ninth inning, steal a base, make a running catch in the outfield and help out his team in any way that he could.

Getting Football Back. DallasNews’ Kevin Sherrington writes about the good spring that’s happened in the South Plains and Sherrington asked Hocutt about football:

“I think about that every day,” Hocutt said.

There are some good nuggets here, some of which you already know about head coach Matt Wells, but here’s this bit from a Sherrington interaction with former head coach Tommy Tuberville (how he was ever hired is an absolute masterclass on how not to hire a head coach):

A Lubbock culture primer: Tommy Tuberville’s assessment in 2017 that it “looked like Iraq” wasn’t his first shot at the local landscape. I’d hardly introduced myself to the new football coach in 2010 before he made a similar comment off the record. Guess he wasn’t kidding.

And here’s Sherrington about Wells, who Hocutt is hoping is that disciplinarian who coaches players hard:

Besides determining if Wells had anything against uninterrupted horizons or the color beige, Hocutt needed to find someone who could instill some discipline in the program. Ensure that players make as few mistakes as possible. When you’re coaching a program that doesn’t attract four- and five-star recruits, you can’t give away yards and points. Hocutt believes this because it’s the way he was raised. An undersized linebacker out of Sherman, he played at Kansas State for Bill Snyder and Bob Stoops, Snyder’s defensive coordinator.

“They coached us hard,” Hocutt said. “They pushed us to be the best we could be.

“Beyond what we thought we could be.”