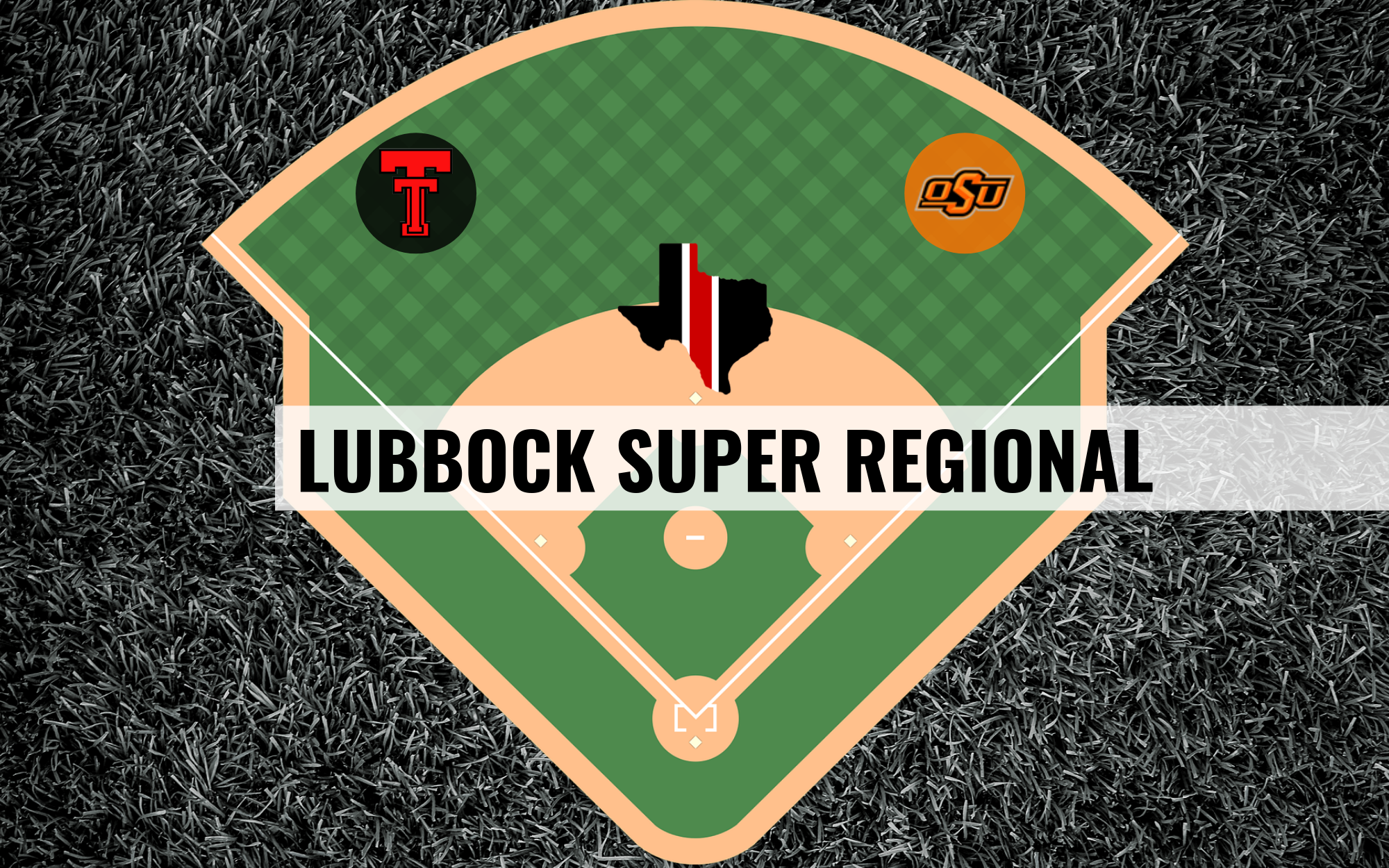 Two wins to get to Omaha.

The Red Raiders (42-17), who earned a three-game sweep over the Cowboys (39-19) earlier in season, will need to claim two more if they’re planning to advance to a second straight College World Series.

Texas Tech gets its first chance at 2 p.m. Friday when it takes on OSU at Dan Law Field at Rip Griffin Park. The second game is set for 5 p.m., while a decisive third game — if needed — is scheduled for 5 p.m. Sunday.

“It’s pretty cool because you’re familiar with them, but it’s also one of those things that both of you know what you’ve got,” said Texas Tech junior Josh Jung, who was selected by the Texas Rangers with the eighth overall pick of the Major League Baseball First-Year Player Draft earlier in the week. “There’s no wildcards here. It’s going to be very intense, and I can’t just wait to play them again.”

Assuming Josh Jung makes it to Major League Baseball someday — and the Texas Rangers clearly expect him to as the No. 8 overall pick in the draft — there won’t be many big-league parks that are new to the Texas Tech infielder.

“That was one of our biggest things in the summers growing up was wherever we ended up for baseball, we’d try to make pro games,” Jung said Thursday. “So I think I went to 24 stadiums growing up. I never made it to the West Coast — I’ve been to California — but everywhere else I’ve pretty much been. I’ve been to a ton of Rangers games.”

Growing up in Lubbock, Sifrit would attend Red Raider baseball games and dreamed of becoming a Division I baseball player. During his junior season, Sifrit saw it all come true when he committed to Oklahoma State. The Cowboys were one of the first schools to heavily recruit Sifrit, though he did pick up other offers from Texas Tech, Wichita State and Air Force.

Signing on with a Big 12 school, Sifrit was aware it meant playing in his hometown with a different colored jersey. But, he’s also able to see family and friends when he makes the trip down or they trek up to Stillwater, Oklahoma.

“Being six hours away, I don’t get to see them all the time,” he said. “My parents do a good job of coming up quite a bit, so they bring home with them.”

The winner of the best-of-3 series earns a trip to the College World Series. First pitch is 2 p.m. Friday. The Saturday and Sunday (if necessary) games start at 5 p.m.

In hindsight, the first trip to Texas Tech was an important learning experience for Josh Holliday’s team.

“The trip out here was definitely one of those weekends where we came away from it with a good idea of things we could get better at, a sense of urgency about making those adjustments, and then to compliment our players, the way they handled it and responded to it,” the OSU coach said Thursday.

“It’s just part of your season. It’s part of the great challenges that Big 12 baseball presents, and it’s also part of why I believe if you can survive our conference week in, week out, you’ll be prepared for just about anything you’re going to see when it comes time to face the whole country. Just another lesson in the season, and we played better, we grew from it.”

These two teams are similar from a pitching standpoint. While both have had their fair share of ups and downs this season, the two rotations enter Super Regional action on a hot streak. Micah Dallas (3.36) and Bryce Bonnin (4.28) were both excellent in the Lubbock Regional. Dallas has good velocity on his fastball and a filthy slider, while Bonnin is a power pitcher who has developed better command and secondary stuff as the season has progressed. Tech also has a good one in righthander Caleb Kilian (3.89). Kilian will sit anywhere from 90-93 and up to 94 mph with his fastball, while the curveball is a real weapon for him as well. Kilian can throw three pitches for strikes. As for the Cowboys, Jensen Elliott (3.33) entered the season with high hopes and has been phenomenal down the stretch with a fastball 89-92 and up to 93 mph, while also possessing three pitches for strikes, including a quality changeup/slider combination. OSU has four legitimate starters, including veteran Joe Lienhard, who threw well in the regional finale against UConn this past weekend. Brett Standlee has a quality arm with a fastball up to 92-93, along with a slider and changeup, while Parker Scott is a talented lefty with a four-pitch mix.

No. 8 Texas Tech baseball built a pair of three-run leads Friday afternoon before holding on for an 8-6 victory over No. 9 Oklahoma State in the NCAA Lubbock Super Regional opener inside Dan Law Field at Rip Griffin Park.

The victory pushes Tech (43-17) one win away from its fourth College World Series in the past six years. Tech can secure its spot in Omaha Saturday evening when the two teams meet again in a 5 p.m. first pitch.

The Red Raiders jumped on the Cowboys (39-20) early, scoring two runs in the second off a RBI single up the middle from Dylan Neuse and another in the third from a Cody Masters solo home run, his first of the postseason and fifth of the season.

Tech added three more runs in the fourth from a Brian Klein RBI single and a two-run error off a dropped fly ball in center field. Kline was one of four Red Raiders with at least two hits as he finished 2-for-3 overall with two RBI after padding Tech’s lead with a sacrifice fly in the eighth.

No. 9 Oklahoma State pushed the NCAA Lubbock Super Regional to a third and final game Saturday after the Cowboys secured a 6-5 victory over No. 8 Texas Tech in front of a capacity crowd at Dan Law Field at Rip Griffin Park.

The Red Raiders (43-18) will now need to win Sunday’s rubber match between the two Big 12 rivals in order to advance to the College World Series in Omaha for the fourth time in the past six years. Tech had previously won eight-straight games in the series against Oklahoma State (40-20), including all four meetings this year.

After leading for all but one inning in Friday’s opener, Tech was forced to play from behind for most of the evening after Oklahoma State struck for a run in the first and then two more off a Hueston Morrill home run in the fifth.

Tech answered multiple times, scoring a run in each of the final four frames to eventually take a 4-3 lead midway through the eighth. Oklahoma State responded with a two-run blast to right field from Colin Simpson in the bottom half of the inning to briefly retake the lead.

Josh Jung and Kurt Wilson connected on a pair of opposite-field home runs in the eighth inning Sunday evening, sending No. 8 Texas Tech back to the College World Series following an 8-6 victory over No. 9 Oklahoma State inside a raucous Dan Law Field at Rip Griffin Park.

The Red Raiders (44-18) erased a two-run deficit thanks to the pair of home runs, returning Tech to the pinnacle of college baseball in Omaha for the fourth time in the past six seasons. Tech joins only Florida and Big 12 counterpart TCU as the only schools nationally to reach the College World Series four times during that stretch.

Jung’s leadoff home run – his second of the game – kick-started a four-run bottom of the eighth as Cameron Warren and Cody Masters followed with walks, setting up Wilson’s heroics two batters later. Wilson’s home run, a towering shot off the video board in right center, marked only his fourth of the season and first of the postseason.