Hard to find two more deserving student-athletes than these two. 📚

Tolkein Style Map. Reddit user themattboard has created Tolkien-style maps of a bunch of states and I’ve been patiently waiting for the Texas map to drop and it did yesterday (click there for the actual map). This is the Texas Tech crest and it is fantastic / fight me / 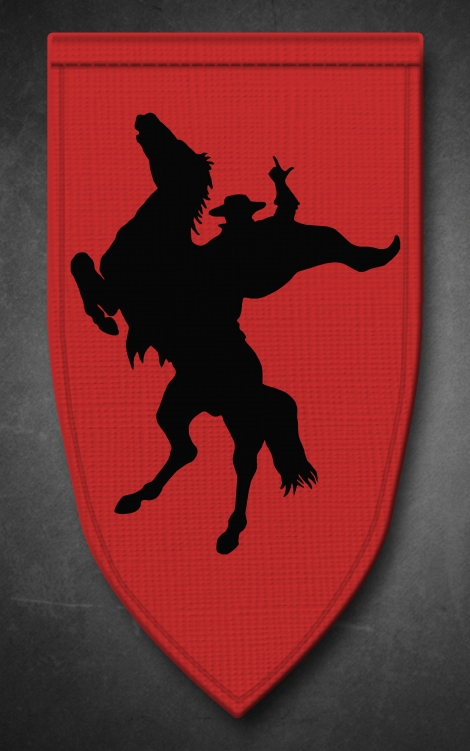 Every banner that he’s done can be found here. Long live the Raider Encampment!

We’ve got a job to do and we’re in a position to do it.

“We feel confident that we can do our job. We’ve just got to worry about us.”

Oduduru Ready. IAAF has a nice feature on Texas Tech sprinter Divine Oduduru, who is ready for opportunity at the National Championship meet, but this story gets into his growing up in Nigeria, moving to Lubbock to run for Texas Tech and his credit to his sprint coach, Calvin Robinson:

Yet it was to be the Nigerian’s next move by taking up a scholarship at Texas Tech which has, arguably, proved the smartest decision of his athletics career so far.

“I’m not going to lie,” he explains. “This has been the best part of my life so far. It is something I’ll never regret. It is a real privilege and opportunity to be allowed to run for Texas Tech.”

Injuries marred his freshman year in 2016-2017 as his body took time to adapt to the new training regimen. However, inspired by a strong group of team-mates and a coaching team around him led by Calvin Robinson, whom he describes as “a father figure,” he came out firing in the 2018 indoor season.

Winning NCAA Indoor 200m silver in a time of 20.21 having earlier that season recorded a Nigerian indoor record of 20.18 filled Oduduru with a rising belief.

Outdoors he took this up a notch by setting a PB of 20.13 and later taking a 200m title at the NCAA outdoor championships in Eugene.

“It meant a lot to me (to win). I don’t just want say I was here (at Texas Tech). I wanted to make my mark. My coach has been able to create that platform. He has been wonderful to me, the team and the programme.”

Clement Sordet and Mito Pereira have advanced to Pebble Beach through sectional qualifiers.

Gorgeous day for the 1st annual welcome back team BBQ☀️
Check out our 3.0 club honorees🤩 pic.twitter.com/WjnfARvyPI

Game Times Announced and Sold Out. We’re just going to combine two things here, in that yesterday, game times were announced for the Lubbock Super Regional and within minutes, I think it was sold out.

I think all three of these guys will sign, so congrats to them for achieving their dreams of getting drafted. Kilian improved his draft status from last year significantly, 20th round to the 8th round, while Holt tweeted out that he and Floyd will be teammates again. I think the third day of the draft will go on today, so more players could get drafted. I know that there were some commits that were picked as well and I’m not too concerned with them, other than I hope they do what makes them happy.

Moretti Gets On List. Via NCAA’s Andy Katz, shooting guard Davide Moretti was named as the 9th most likely player to win the Jerry West Award, going to the best shooting guard in the country:

9. Davide Moretti, Jr., Texas Tech: Moretti will benefit from the departure of Matt Mooney. Those shots should shift his way and expect him to knock them down. Chris Beard has immense confidence in Moretti and he has earned every bit of the attention he should receive.

I’m extremely blessed to announce that I will be transferring back to my home town and playing football for Texas Tech University #wreckem pic.twitter.com/WtWLYzZYyB