One of the things we’ve been able to do with relative accuracy is to determine the scholarship situation for men’s basketball. There’s only 13 roster spots, so figuring out who is a scholarship player and figuring out how many spots remain is really pretty easy.

For football on the other hand, it can be a bit tricky to figure for football because we really don’t know who is a scholarship player for the walk-on players. Some players receive scholarships and we really may not know about it. The other thing that’s a bit tricky is that in year’s past (not necessarily last year, maybe 5 or 6 years ago) most of the specialists, i.e. kickers and punters, were not scholarship players. I think that’s changing and some players are who received a scholarship and some are not. I don’t know how to tell other than to ask each of these players on Twitter (which I’m not going to do), but my guess is that the 2 specialists from the 2019 class are actually scholarship players and I’m going to presume that is the case.

You can click on each image to embiggen (it is a real word, don’t doubt me).

So Texas Tech’s 8 transfers (which includes walk-on’s) doesn’t seem all that bad. With Arizona State, Oregon State, Arizona, and UCLA they are all in year-2 of a coaching change, so maybe this is something to watch carefully again next year.

I went through the roster and tried to determine which players were scholarship or not scholarship. This is the part that is an inexact science. I know that each one of these players arrived as walk-on’s, but over the offseason, they may have earned scholarship spots (like Leggett or Rigdon or Carr). I just don’t know.

Still, that’s 24 non-scholarship players. That’s important because every roster is only allowed to have 105 players.

I’d also add that I don’t know anything the new transfer in from Arizona, long snapper Geno Albini. Most of the time long snappers (also known as deep snappers or DS on the roster above) are non-scholarship players.

I would like to add that I don’t know how hard-and-fast the 105 player limit for football actually is. That may be a number in which can suit up at a home game, but there could maybe be other players who practice with the team, but don’t get to suit up for home games? I don’t know. I’m basically admitting my ignorance here. 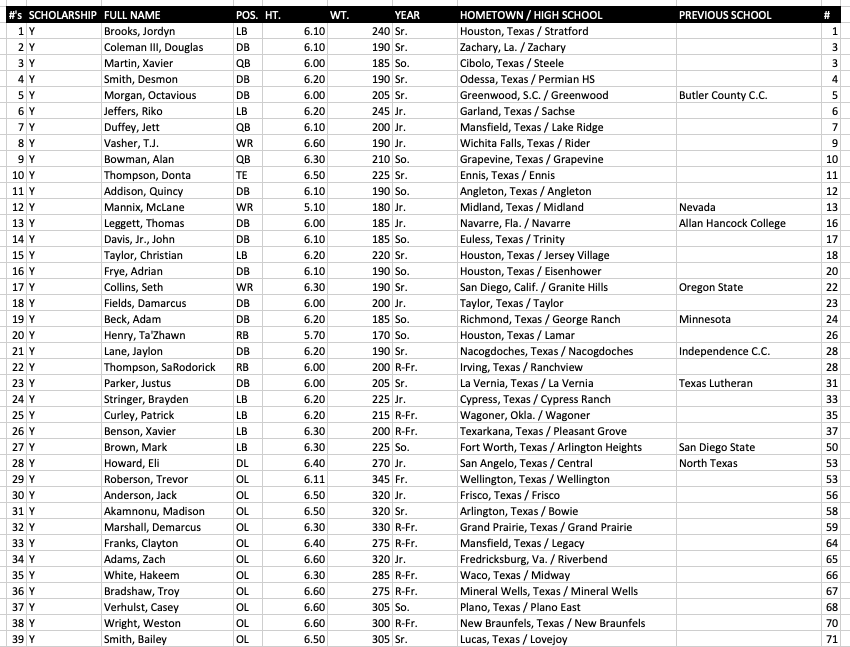 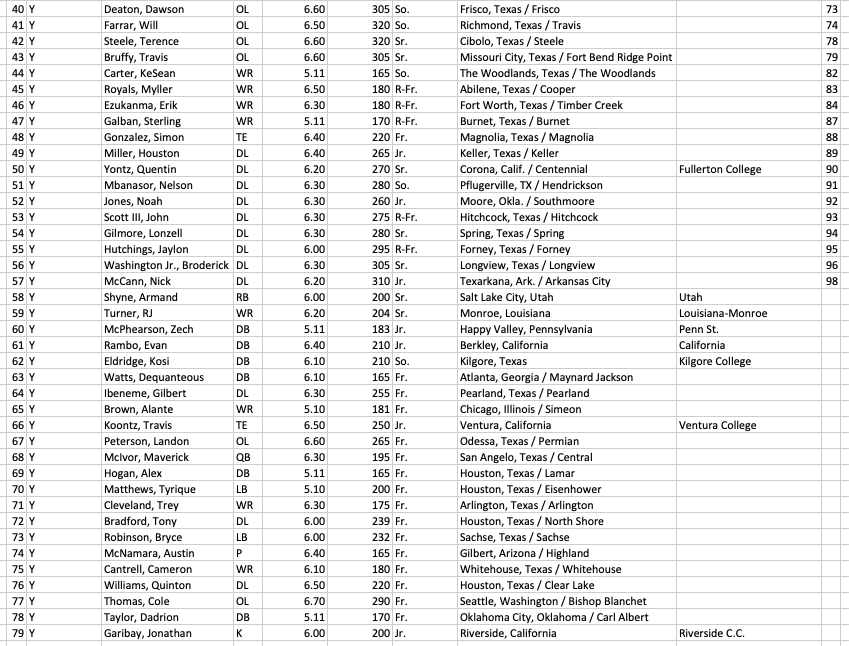 By my count there are 79 scholarship players.

As you can see, from Nick McCann to the end of the spreadsheet, are the transfers arriving into the program as well as the 2019 class of signees. As mentioned above, I’m not sure if the kicker, Jonathan Garibay, and punter, Austin NcNamara, are scholarship players or walk-ons. I think the trend has been to scholarship the one’s that you don’t want to get away, but I’m not sure.

So, if there are 79 scholarship players, that leaves 6 spots for me to be wrong about who is a walk-on and who has a scholarship and to maybe add some players as well.

My guess is that this is pretty close to being accurate, within a few scholarships here or there. I’d also add that I count 18 seniors as part of the 2019 class, which means that there will be at least 18 scholarships available (unless one of those seniors redshirts due to an injury, like Christian Taylor who I think will miss the entire season). Each year you are allowed to add 25 players, so maybe the idea will be to add 20 or so signees who are freshmen with 5 spots kept available for transfers. I’m not sure how that will work, but like everything else, it will be something to watch. It does appear that head coach Matt Wells is pretty active in the transfer market.