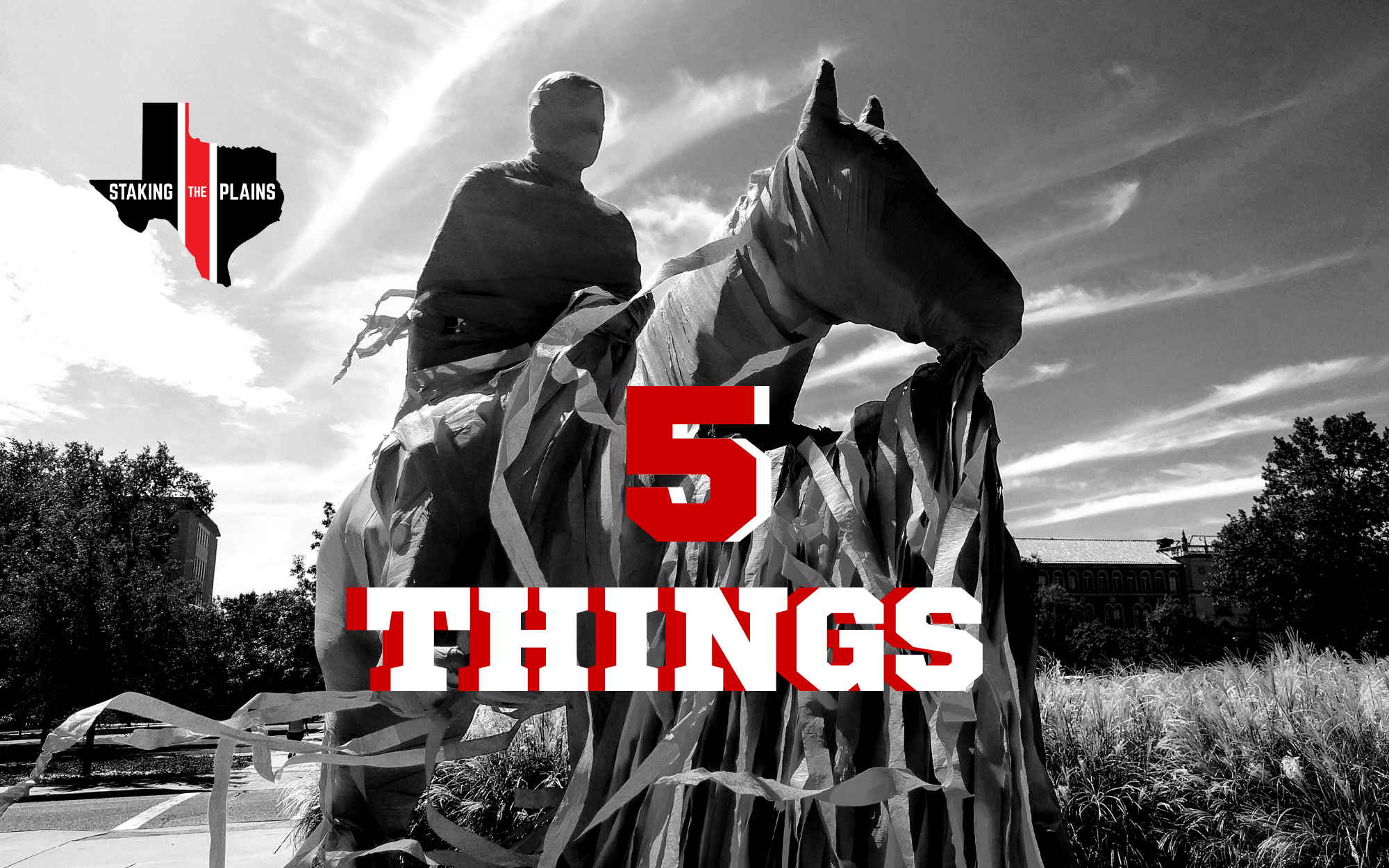 These are some things. Five of them.

1. Erik Ezukanma Can Play. With injuries, it is usually a bad thing because the main players are guys that aren’t getting those oh so very important reps, but then when players step up, like Erik Ezukanma, then you realize you have something that’s pretty special. Ezukanma looks like a dude and he’s got some size, and strength that wasn’t something that I really expected at all. So it’s exciting to know that the process is working and that players are making strides even though they’re behind a redshirt year.

2. Transfers Galore. There’s a certain amount of expectations that need to be considered when we talk about transfers. We’ve been spoiled watching the basketball team and see how Matt Mooney and Tariq Owens be incredibly integral to the program. But Mooney and Owens were really good players at their former programs and those programs may not have been gone to the heights that they wanted their college careers to end. With football, I think that’s a lot more rare and I think with the transfers that committed to Texas Tech, these are players who were at Power Five programs that didn’t perform and needed a change of scenery. Defensive back Zech McPhearson didn’t play a ton for Penn State and California linebacker Evan Rambo played sparingly for California. Utah running back Armand Shyne probably has the best resume of the transfers. The cool thing about McPhearson and Rambo is that they’ll each most likely have two years to play, so they’ll have time to get acclimated, and have a different bit of strength and conditioning and the coaching staff won’t be pressed to play them immediately. So this is experienced depth that isn’t guaranteed to be impactful, but they’ll have a fresh start and might be able to make an impact given that they have a bit more time. It’s also nice to have the staff maybe target and recognize players that they’ll be able to develop a bit. I think it is difficult to come in and play on a one-year deal, with Shyne, if he’s over his injuries, he should be fine.

3. Defensive Line Depth. Even though Joe Wallace is suspended, I think that the defensive line depth is pretty special and I really like the options that are available here. I have to somewhat keep in mind that we’re just talking about three positions here and although I am concerned about the overall pass rush, it sounds as if the defensive line isn’t going to be a “hold the line” group this year. I think one of the big things about David Gibbs defensive philosophy was that it was critical that the defensive line hold their line and hold their gaps. In the most recent Saddle Up episode, Broderick Washington said that this isn’t the philosophy any longer. I think that this was one of the reasons why Brieden Fehoko left and now this group will be able to play a bit more with their hair on fire, and I think this is beneficial overall. Washington is a hoss and him playing gap responsible football is great, but if he’s able to rush the passer a bit, then maybe we get to seen an entirely different player. Same thing could be said about seeing how other players react, like Nick McCann and Nelson Mbanasor and Eli Howard. I think the idea of the gap responsible football is a good idea and Patterson’s defensive philosophy may still lead to heartburn (it is very likely in fact) but the heartburn will be different in that big plays will be given up, it’s almost assured, but there could be more big plays on Texas Tech’s end of things too.

4. Linebacker Quality. In addition to the defensive line, I’m very much enjoying the overall linebacker quality of linebacker play. To be able to have Jordyn Brooks, Riko Jeffers, and Brayden Stringer all make plays is pretty nice, and I’d even start to add in Patrick Curley. Curley still has a ways to go in terms of size, but I’m quite confident in how Jeffers, Brooks, and Stringer will all play out this year. I’m still comfortable with the idea of having Jeffers be a pass rusher, I think that would be a fantastic use of his talents and I don’t think the drop-off in terms of talent is that noticeable when Stringer steps on the field. He plays hard all of the time and I think he’s a pretty good athlete. I worry a bit about numbers because after Curley, we’re getting into guys like Xavier Benson, the aforementioned Rambo, and the injured Christian Taylor, who had an injury that could keep him out for the entire year. I also noticed Mark Brown a bit, the transfer from San Diego State and I think he’s still trying to figure out where he’s supposed to be (my recollection was sporadic, but I looked up to see who it was quite often when watching the Frisco scrimmage). I think his presence will help those depth numbers for sure, but the top three are three guys that I think are very good.

5a. Bowman’s On Point. For me personally, I think that Alan Bowman is going to be the breakout star of the Big 12. I think we were teased about his potential last year and he only scratched the surface about what he can do physically. I think his recognition is as quick as anyone I’ve seen and I severely doubted his arm last year (as a true freshman) and I’m not doubting it any more. I also really sort of appreciate his bravado to an extent, when asked during a media session if he knew the playbook, and it was, “Oh yeah, I learned it within the first few weeks.” Bowman also said after the Frisco scrimmage that there are more options for each play, so I’m guessing that these are receiver options and the receiver making the read versus what Bowman is doing. So if it looked like that the offense wasn’t on the same page, that very well could have been true. Those are things that still have to get worked out to an extent and maybe some extra 7-on-7 work will help the receivers and Bowman get on the same page. I do know that when it clicks, it could really be run.

5b. Why Not Us? Maybe the best thing that could have happened to the football program was for the basketball program to have tremendous success. Look, I’m the guy that’s supposed to grind you into reality, but for the players, they’re supposed to think that there is no reason why it can’t be them. Broderick Washington said that on the latest episode of Saddle Up, “Why not us?” The basketball team did what they did with 3-star and 2-star players, why can’t they have the same success? My hope is that the team and the players realize and see how dedicated Beard’s team was to playing basketball. Beard constantly talked about how the players lived basketball. Any time that they wanted to get up extra shots, there was a graduate assistant ready to rebound. Any time that they wanted to workout, they had a strength coach available. My hope is that the football players completely buy into the player development part of being great, not just the work, but all of the extra work that it takes to be great. It’s the extra stuff that you’re willing to do to be great. That’s what separates the okay from the good and the good from the great. It’s up to them to a large part. And the interesting thing about basketball is that it is more close knit, there’s only 15 or so players that you have to get to buy in, where with football, it’s maybe 100. That’s where guys like Washington has to be the guy for the defensive line, and Bowman has to be the guy for the quarterbacks, and Douglas Coleman has to be the guy for the defensive backs. You get the idea. If you get buy in from at least one player, then hopefully that spreads to the rest of the group.