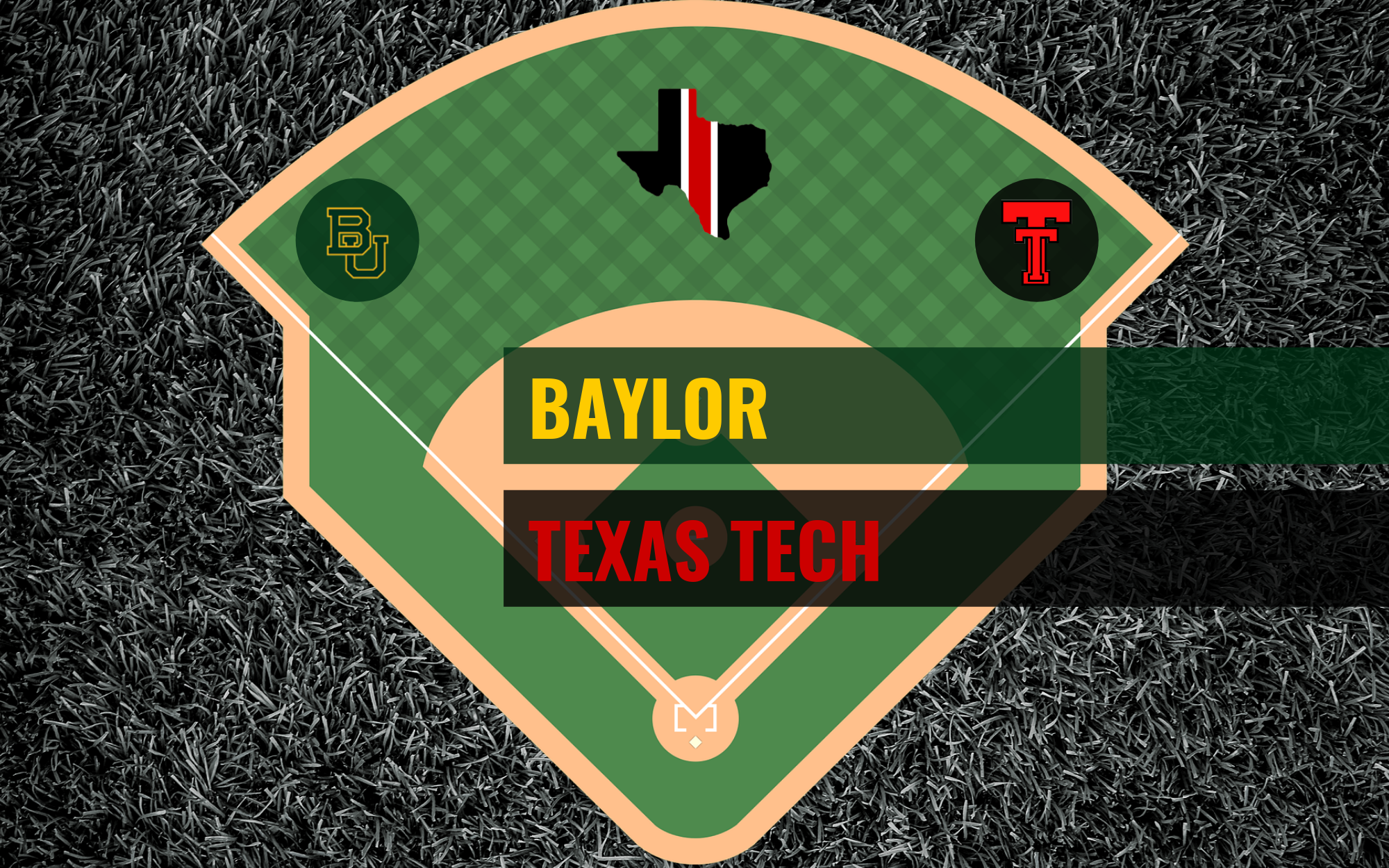 The Bears are here.

I think I have very much appreciated how many road games this team has played thus far when it was put into perspective that 15 of the next 18 games will be at Rip Griffin Park. The only away series remaining is the Oklahoma series the first of May. So that means Baylor, New Mexico, and Oklahoma State are all on tap at home for the next 8 games. And there’s still time to make a run at the Big 12, Baylor leads the conference at 8-3, but there’s a logjam of teams sitting right there at or around .500:

Meanwhile, a team like Baylor has played most of their conference games at home thus far (6-2 at home, 2-1 on the road) and have Texas Tech, TCU, and Oklahoma State all on the road to finish out the year with Kansas State the lone home series. The bottom line, if Texas Tech was going to make a move, this is it. And I’m largely comfortable with how things are rolling. The thing that I’m probably most happy about is that the starting pitching appears to be doing pretty darn well, at least I’m relatively happy with it (other than Lanning’s start against Kansas and Bonin’s start against Duke wasn’t great). Tadlock has options if Lanning doesn’t stick the landing here including mid-week starter Bryce Bonin (iffy) and freshman Mason Montgomery. I know that closer Clayton Beeter is struggling a bit, but the fact that John McMillon appears to be finding his groove is very encouraging.

And I did want to take a look at some conference-wide stats, just to get an idea about where Texas Tech sits in terms of the conference. The Red Raiders are 3rd in slugging percentage, 2nd in on-base percentage, 7th in ERA, 5th in strikeouts per 9 innings, 1st in home runs allowed (only 11), and 3rd in fielding percentage. Overall, that’s probably a pretty good team that just hasn’t been able to put things together for whatever reason.

“I don’t know as much about the concern as I know everything we want to achieve is right in front of us,” Tech coach Tim Tadlock said Wednesday. “You could flip that record and you still need to win games from here out and you still need to play our best baseball from here out. We by far haven’t played our best baseball. I think that’s in front of us.”

It’s not just Tech, Tadlock pointed out. Other than Baylor, no Big 12 team is more than two games above .500 in conference play and five are bunched from one game above .500 to one game below.

“I think our league, it’s the number-two RPI league in the country,” Tadlock said. “It’s probably recognizable to everybody that everybody (in the Big 12) is beating up on everybody. So what you want to do is keep plugging and keep trying to improve and get better each day.”

WacoTribune’s Brice Cherry – What a relief it is: Baylor bullpen stepping up, getting job done for first-place Bears:

As it turned out, Baylor’s pen has proven mightier than the baseball writers’ ball-point swords. Led by Hill, a de facto “Old Guy” last year as a junior, the BU relievers have tallied a 16-5 record with a 2.93 ERA in 187.1 innings pitched on the year.

Baylor coach Steve Rodriguez admitted that those pitchers have been even better than expected.

“You always like to be surprised as a coach, in a good way,” Rodriguez said. “The big thing for me is those guys who are really kind of anchoring down that bullpen are the older guys, who in my opinion have now earned this position in the spot they’re in right now. They do everything they’re supposed to do. They go out there and they pitch well. I think they’ve learned a lot from the guys we’ve had in the past and how they go about their business.”

No. 16 Texas Tech baseball battled back from a 9-3 hole to send the game into extras before falling, 11-10, in 11 innings against No. 18 Baylor Thursday night at Rip Griffin Park in the first of a three-game series, presented by Texas Farm Bureau.

The Red Raiders (23-13, 6-7) received home runs from junior Josh Jung and sophomore Cody Masters and set a season high with seven doubles to fuel the rally. Baylor (26-10, 9-3), however, pushed across the winning run in the top of the eleventh as leadoff hitter Nick Loftin doubled down the line in right and scored on a Richard Cunningham single to center.

After tossing 3.2 scoreless innings in relief last Friday at West Virginia, junior John McMillon (0-2) was sensational out of the pen once again. He retired the first 12 batters he faced in order before giving his only hit over 4.0 frames on the double from Loftin in the eleventh. The Bears were able to knock in the winning run after Tech made a change for lefty Dane Haveman, who turned around to end the inning with a double play.

Sophomore Cody Masters drilled a bases-loaded single up the middle with two outs in the bottom of the ninth to push No. 18 Texas Tech baseball to a 3-2 walk-off win over No. 18 Baylor Friday night in front of a sold out crowd at Rip Griffin Park.

The Red Raiders (24-13, 7-7) trailed 2-1 in the eighth before a walk to sophomore Gabe Holt with the bases loaded evened the score, setting up Masters for his heroics in the ninth. The win leveled the three-game set at one game apiece and pulled Tech back to .500 in Big 12 play.

A combined 10 RBI from senior Cameron Warren and sophomore Dylan Neuse led No. 16 Texas Tech baseball to a commanding 13-3 victory in seven innings over No. 18 Baylor to take the series Saturday afternoon in front of a sold out crowd at Rip Griffin Park.

Warren and Neuse led a fierce offensive attack by the Red Raiders (25-13, 8-7) that featured four home runs by three different individuals, including a grand slam and a walk-off home run from Neuse. The walk-off win was Tech’s second in two days against the Big 12-leading Bears, and its third of the season.

Warren and Neuse led a fierce offensive attack by the Red Raiders (25-13, 8-7) that featured four home runs by three different individuals, including a grand slam and a walk-off home run from Neuse.