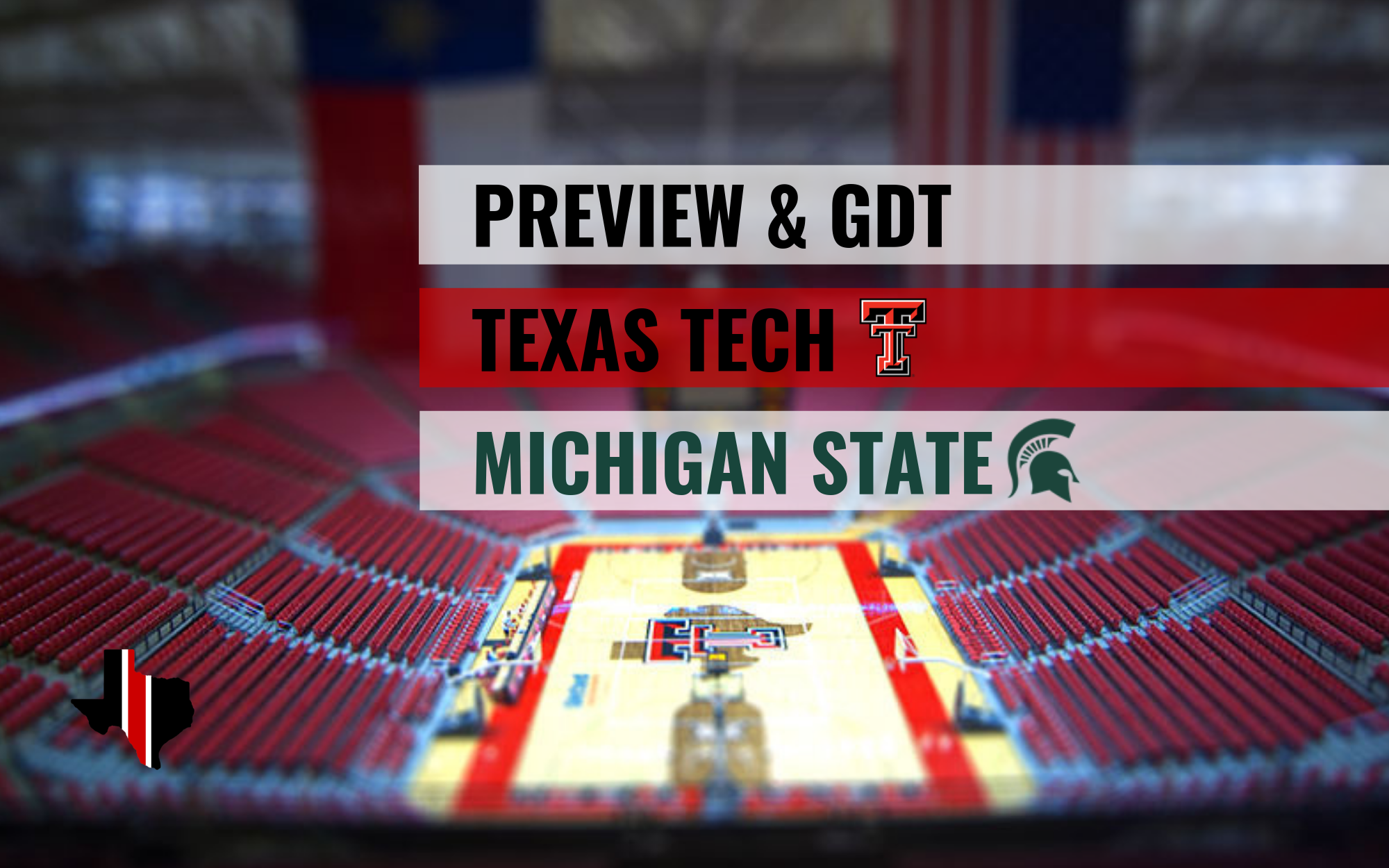 We’re down to the Final Four.

How to Watch: CBS | MarchMadnessLive

2. Scouting. Winston is absolutely terrific, high usage rate and a terrific offensive player, a very good three-point shooter. Not only is Winston a good offensive player, he has a very high assist rate and is a terrific free throw shooter. McQuaid is a terrific spot-shooter, making 42% of his three-point shots and scores when called upon. The three forwards are all big offensive rebound guys, they’re all very good on the offensive glass and elite on the defensive glass. Tillman, Goins, and Ward are all elite rebounders and Tillman and Ward are very good at contesting shots (Goins isn’t bad at contesting shots, just not as good as Tillman and Ward). They are not outside shooters and I’d guess that they are all shooting shots in the paint.

3. How They Match Up. The worrisome thing is that Michigan State is terrific on the offensive boards and the latest Texas Tech loss was West Virginia who absolutely pounded the offensive boards in route to a win over the Red Raiders. Michigan State is capable of that. I would think that Texas Tech is very aware of that. Blocking out will be absolutely critical. The other interesting trait is that Michigan State only plays 7 players, but that’s not by design, they had a couple of guys get injured who were critical to this team, Joshua Langford was averaging 15 points a game (he only played in 13 before getting injured) and Ahrens was averaging about 5 a game. I think that maybe the Culver vs. McQuaid is likely a very good match-up for Texas Tech (McQuaid is very good defensively, but I still like this match-up) and if Culver can get off shots and be an offensive threat then I like Texas Tech’s chances significantly.

Now he’s two wins from winning a national championship, should the Red Raiders knock off Michigan State on Saturday night and the Auburn-Virginia winner on Monday.

“I believed it the day we said it,” Beard said. “First thing, you’ve got to have a plan. You’ve got to have a vision. And you can’t be afraid to tell your vision to people. Let’s be honest. When we said that three years ago, a lot of y’all (were skeptical), but you have to believe in what you think you can do. And we did.

“And then you go out and hire people that believe that, too. You get players to believe it, and young guys that maybe don’t believe it, you get them to believe in you and eventually they’ll believe in it — and ‘it’ for us has always been to compete for championships, and we’ve done that.”

A-J Media’s Carlos Silva, Jr. – No. 9 Red Raiders, No. 5 Spartans poised for battle on the boards:

“You’d better rebound and get back and take good shots,” Beard said of playing Michigan State, a member of the Big Ten. “These guys have NBA players, specifically with the Big Ten. I think the reputation is true with the physical play around the basket and the rebounding. Obviously, Hall of Fame coaching. We try to keep it pretty simple. To us, it’s a Big 12-level BCS game.”

The Spartans are similar to Texas Tech, as well, knocking off the top seed — Duke — before claiming the East Region championship. The Red Raiders downed top-seeded Gonzaga 75-69 to claim the West Region title.

Matt Mooney always ensured he ended the day with a smile instead of a frown.

“He’s always been a stubborn kid,” Mike Mooney said, chuckling. “I always knew after a long day of work if he was at home right when I walked the door. You could feel a bit of stress or some calmness to the house. Matt made everything a competition.”

“He would bring NCAA Tournament brackets to school,” Angela Mooney said. “It probably wasn’t good for me to let him, but he was so excited for the tournament. And come high school, because of his love for the NCAA Tournament, I agreed for him to take some personal days to watch it. So he’d have his friends over and they’d enjoy it all.

“But, I could see it in his eyes, he knew he would be there one day.”

Texas Tech is making its first Final Four appearance where it will take on Michigan State at 7:49 p.m. on Saturday at U.S. Bank Stadium in Minneapolis, Minnesota following the first matchup between Auburn and Virginia. The Red Raiders, who have won 13 of their last 15 games, advanced to the Elite Eight last season and are now 7-1 under head coach Chris Beard in the NCAA Tournament the past two seasons. Tech has matched the program’s all-time win total at 30 after earning a 75-69 West Region Championship with a win over Gonzaga last Saturday in the Elite Eight, while the Spartans are on a nine-game winning streak and are back in the Final Four after a 68-67 win over Duke on Sunday to win the East Region. The Red Raiders are led by a senior class of Norense Odiase, Brandone Francis, Tariq Owens and Matt Mooney along with sophomore Jarrett Culver who is a consensus All-America and the first Big 12 Conference Player of the Year in program history. Beard enters Saturday’s game with a 75-30 record in three seasons leading the Red Raiders. The national championship game is scheduled for 8:20 p.m. on Monday at the U.S. Bank Stadium.