The first round is in the books, and Texas Tech is on to the Round of 32 to face Buffalo. Texas Tech’s 15-point win over Northern Kentucky was almost exactly as expected. Opening lines in Vegas were around 14.5 points in favor of the Red Raiders, while BPI estimated Tech would win by 15.3 points.

So let’s take a glance at Texas Tech’s second round odds as well as how the West Region is shaping up now that the herd has been thinned in half (notably, without any major upsets unless you count Murray State advancing as a 12 seed).

According to BPI, Texas Tech has a 71.5 percent chance to beat Buffalo tomorrow evening with an expected margin of victory of 6.3 points. Interestingly, BPI ranks each day’s matchups in terms of quality, and the Texas Tech-Buffalo tilt is supposedly the highest quality matchup on tap tomorrow with a quality score of 87.4. That sort of scares me because it signals that Buffalo is a good team who could give Tech a very competitive game. On the other hand, it’s the second round of the NCAA Tournament and there aren’t really any bad opponents left, so every game has the potential to be something special.

FiveThirtyEight isn’t quite as high on Texas Tech’s odds of advancing to the Sweet 16, giving the Red Raiders a 67 percent chance to top Buffalo. And the experts in Las Vegas have things tighter than BPI, too. The opening spread was Texas Tech -3 or -3.5 depending on where you looked. The money line stands around Texas Tech -160 (bet $160 on Texas Tech to win the game in order to profit $100) which are implied odds of 61.5 percent.

Basically, the analytics consensus probably has this around a 60-70 percent chance that Texas Tech wins. The expected margin is three to six points in favor of the Red Raiders. It sounds like Texas Tech will have the upper hand, but certainly minimal margin for error if Buffalo shows up and plays up to their potential.

Now let’s shift to the West Region as a whole. Below are remaining teams listed by seed, their BPI score (expected margin of victory over an average team on a neutral court), and where that BPI score ranks nationally.

Below are each team’s odds to reach the Sweet 16, Elite 8, and Final Four in order of remaining seed. Once a team’s odds dipped below 1 percent, I excluded them from the chart.

Odds to reach the Sweet 16

Odds to reach the Elite 8

Odds to reach the Final Four

The odds to reach the Final Four and the odds to win the region are synonymous, and we can look at FiveThirtyEight and Las Vegas for more insight on the region’s ultimate outcome.

FiveThirtyEight currently has the odds to win the region and reach the Final Four at 50 percent for Gonzaga, 17 percent for Michigan, 15 percent for Texas Tech, 9 percent for Florida State, 4 percent for Buffalo and nobody else higher than 2 percent. 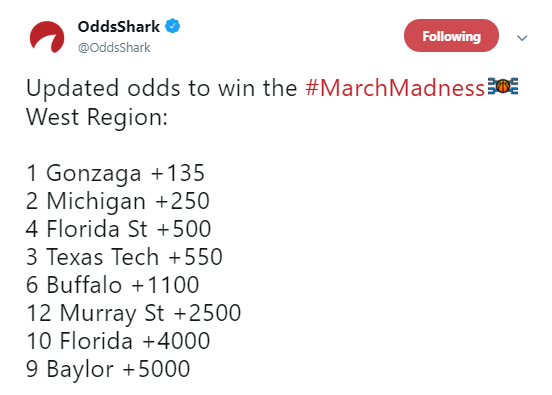 So why does Las Vegas have Florida State as +500 (bet $100 to profit $500) to win the West Region while Texas Tech is +550? The implied odds are nearly identical (16.7 percent for Florida State compared to 15.4 percent for Texas Tech), but it’s a bit of a head scratcher for me. Florida State appears to be a terrible value to win the region at +500. None of the analytics suggest their odds are that high. Texas Tech’s odds listed by Las Vegas seem to be much more in line with reality, at least according to the analytics.

Maybe Vegas knows something we don’t. Regardless, I’ll be making a 13-hour roundtrip to Tulsa and back to Lubbock tomorrow. Come say hi to me in Section 310, bet on Texas Tech to cover (but never gamble!), and go Red Raiders!