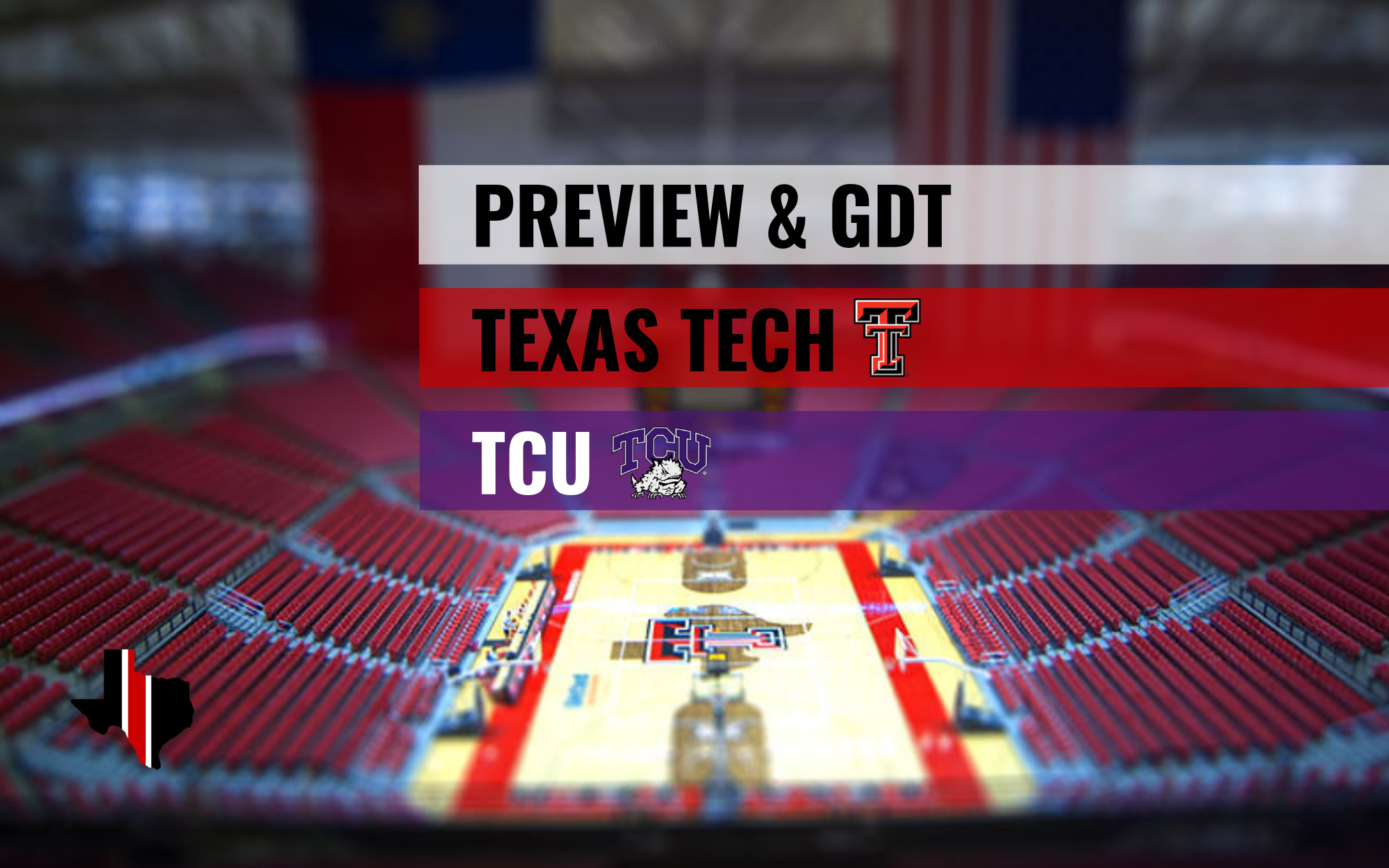 The Red Raiders in Ft. Worth.

Where to Watch: Ed and Rae Schollmaier Arena | Ft. Worth, Texas

1. Stats. TCU has had some weird game and games just not fall their way. I think that’s a large product of having a really short bench (see below). When TCU does lose, it is usually a result of porous defense and/or high turnover rate. TCU is a team that plays relatively well on offense and defense, top 40-ish. The Horned Frogs usually don’t allow teams to shoot that well and typically limit teams at the three-point line as well. I’d say that TCU should be better than their record indicates given how they’re pretty good at most things. In TCU’s last 5 games, they’ve lost to Kansas in OT, lost to both Oklahoma schools, the Sooners at home and on the road to Oklahoma State, then actually beat Iowa State, but then lost to cellar-dweller West Virginia in 3OT’s earlier in the week.

2. Scouting. I want to acknowledge that the 8th, 9th, and 10th players listed for TCU don’t even play. Like maybe at all. So TCU really just plays with maybe 7 players total. I had mentioned the relatively short bench for Oklahoma State and maybe that was a factor in OSU’s OT loss to Texas Tech, but TCU is just so short-handed. Bane and Noi are very good offensive players, high usage and both shoot very well, while not turning the ball over. If TCU is probably going to win on Saturday, it will be the result of having a really efficient game.

3. How They Match Up. Texas Tech’s offensive resurgence struggled a bit against a hot-shooting Oklahoma State. The offensive trajectory has helped and it appears that maybe the most consistent offensive player is Moretti for Texas Tech, he’s darn close to being the best overall shooter (his eFG% is 63% compared to 64% for Corprew). Moretti just doesn’t have the ball in his hands as much as other guys like Culver who has the highest usage rate. How about some numbers from Vegas. TCU is 15-3 at home, while Texas Tech is 6-4. As an underdog, TCU is 2-5 at against the spread at home, they are 10-8. Texas Tech is 21-2 as a favorite and 4-6 against the spread on the road.

“This is what March is gonna be like. It just started a day early for us this year,” Beard said following Wednesday’s triumph.

In some ways, Texas Tech is in a similar situation when it takes on conference and in-state foe TCU in a 3 p.m. Saturday contest at Ed & Rae Schollmaier Arena in Fort Worth set to be televised on ESPN2.

Beard, who has guided the Red Raiders to six straight Big 12 wins, is expecting his squad to be ready to play with the new month in full view.

“I think the challenge is just playing against some of the best teams in the country in our conference,” Beard said. “Zero challenge of trying to get the guys ready. If you can’t get ready for March then you need to go play badminton. No offensive to badminton. That was one of my sports that I chose at church camp when I was growing up.”

“We’re fighting to get in the NCAA Tournament,” said TCU coach Jamie Dixon, whose program hasn’t made consecutive trips to the Big Dance since 1951-52 and 1952-53 seasons.

“Obviously we need to get after it and get a win against Texas Tech.”

That would certainly help the Frogs’ March Madness pitch. This is a team that has sustained bad conference road losses to Oklahoma State and West Virginia of late, although they rose to the occasion to knock off a ranked Iowa State team twice.

On a six-game winning streak and tied atop the Big 12 Conference standings, No. 11 Texas Tech travels to Fort Worth this weekend where the Red Raiders will face TCU at 3 p.m. on Saturday at the Schollmaier Arena.