Get ready for the 11 personnel revolution.

The Ringer’s Robert Mays had a really interesting article about how the Los Angeles Rams essentially use the same personnel grouping, 11 personnel, on 96% of their plays. In offensive coordinator David Yost’s introductory press conference he also said that he ran 11 personnel 96% of the time last year at Utah State. And after watching 3 games from last year, this is absolutely accurate.

And in reading watching Yost’s offense and reading Mays’ article, it all sort of struck me that when you track plays watching the Rams or Texas Tech, there are a couple things that you should probably be focusing on: 1) pre-snap movement, including jet motion; and 2) where the tight end is lined up. And just to clarify, “jet motion” is where the inside receiver or in some cases the running back doesn’t just go in motion, but is screaming across the middle of the field at full speed.

Along with the pre-snap movement, McVay’s team also presents defenses with an assortment of alignments. Every skill-position player on the Rams roster—from Woods to Gurley to tight end Gerald Everett—can line up at virtually every spot within the formation. For the receivers, that can mean spreading out wide or bunching in tight to the formation in some type of stack. By shifting their pass catchers around, the Rams uncover different facets of the defense. “Gurley could be outside, in the backfield, anywhere on the field,” Kromer says. “I think that’s where it’s a little bit more advanced as well. You never know where the guys are going to line up. So if you’re trying to double a guy or take a guy out of a game plan, it’s difficult to do because they’re everywhere.”

In watching Yost’s offense, you definitely have to focus on the tight end because the tight end will line up along the line of scrimmage and also line up in the slot, or even be the single receiver on one side of the field, essentially one-on-one with the defender.

Mays goes into two different advantages for a team that strictly runs out of 11 personnel (or one personnel grouping), which is that learning the offense is simplified and that you don’t tip your and to defenses about the next play. The players may switch out, but the personnel group stays the same and at some point, if the tight end for Texas Tech is an actual threat, unlike last year where Donta Thompson was the spring MVP and was involved in the passing game to having 2 targets and 2 receptions for the entire year. I think the difference with Yost is that he wants the tight end to be an actual threat, not just a blocking back.

The Rams’ approach requires more window dressing than those of other teams, but their steadfast commitment to 11 personnel also comes with a few inherent advantages. By keeping three receivers on the field, L.A. has an easier time forcing opposing defensive backs to honor every inch of the gridiron. Kromer served as an assistant to Payton in New Orleans from 2008 to 2012, and says those Saints teams would often use stacks packed tight to the formation to create two-way releases for receivers. The Rams use a similar tactic on nearly every one of their pass plays. “We force [the defense] to communicate,” Woods says. “They do take away something, but they do give something. … I know that we’re condensed, but they still have to respect every single cut.”

Those tight alignments also allow the Rams to resemble heavier personnel packages in the running game without taking any speed off the field. And it helps that all of L.A.’s receivers—Woods, in particular—are willing and able blockers.

Want to see it in action? Me too. On this first play against Colorado State last year, the tight end is lined up in the slot, right hand side. 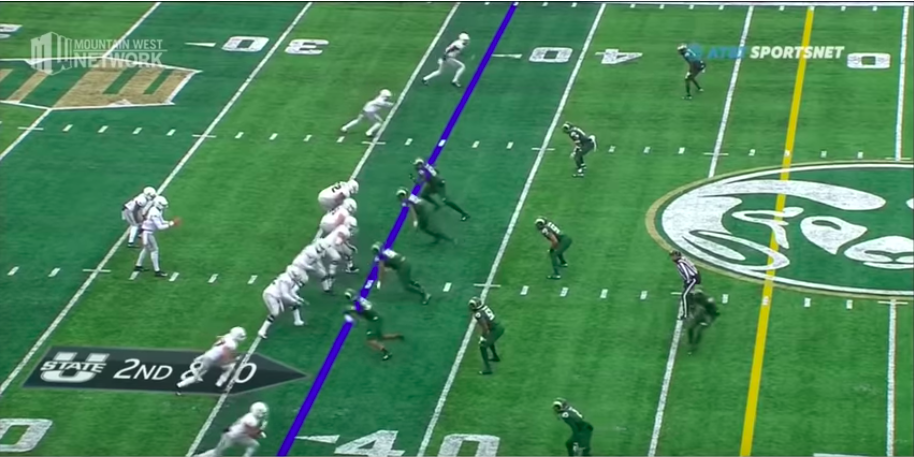 Second play has the tight end as part of the trips left off the line of scrimage.

Here the tight end is lined up as an H-back on the left with the jet-motion by the slot receiver.

And to take this play one step further, this is actually a running play with the tight end and the left guard pulling and hopefully knocking someone down.

Tight end H-back to the right side.

Tight end slot right with jet-motion with their running back.

So when we track plays this fall, we’re essentially going to track the tight end and we’re going to track motion. We’ll be able to watch a lot more of how this works in practice with Texas Tech, but the tight end won’t just be a passing fancy (see what I did there) as it was with Kingsbury. And to be clear, there isn’t one right way or wrong way, that’s in the production and the W’s and L’s at the end of the year.

Much of the headlines last week when Kingsbury was hired by the Arizona Cardinals that they’ve found their Sean McVay, well, maybe Texas Tech has too, but in a more technical sense. And make no mistake, Yost isn’t the way he is because of McVay, Yost has been doing this since his time at Missouri, implementing the tight end and having the tight end be a big part of the offense going all the way back to 2001.