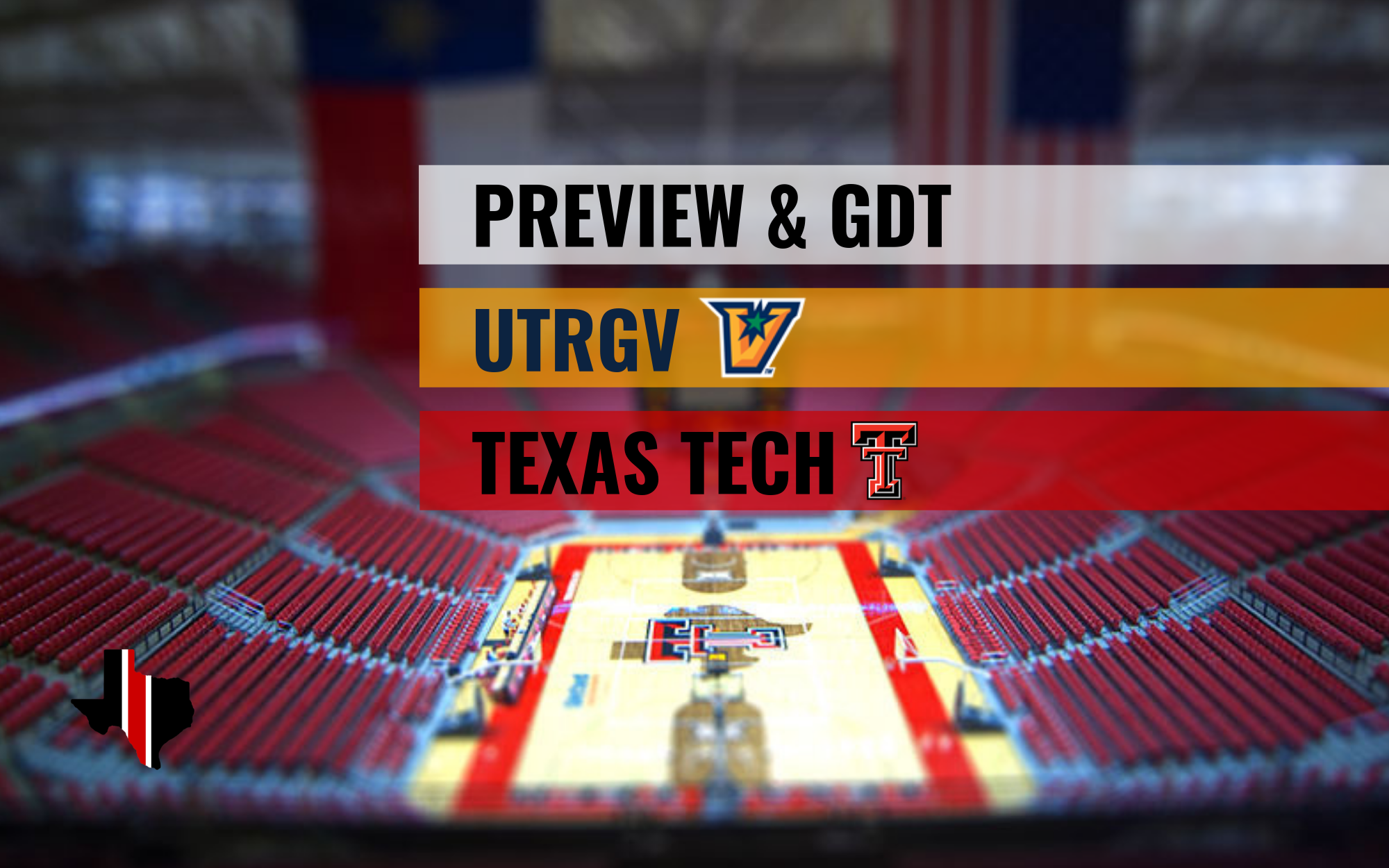 Texas Tech tries to get back on track against the Vaqueros.

The Line: None at OddsShark

1. Stats. After playing the best team in the nation, Texas Tech goes back to playing what’s generally considered pretty terrible teams. UTRGV has wins against teams like Lamar and TAMU-CC, UT-Arlington and McNeese State, with losses against teams like Oklahoma (by 15), Georgia Tech (by 28), Texas State (by 9) and Rice (by 8). Defensively, the Vaqueros are much better defensively, they are a top 10 team in forcing turnovers and are decent at holding opponents eFG% of 47.7%. That’s not half bad, they just don’t score well. UTRGV is also good offensively at getting to the line, so this could end up being a pretty slow and defensive game.

2. Scouting. Varner is the best player for the Vaqueros, low turnover and does a decent job of getting steals at that forward position. Levi is a pretty good distributor and is one of the guys (Hainna is the other) that’s good at getting to the line. The problem is ht at there just aren’t any good shooters for UTRGV. Jackson, Levi and Varner are all very good on-the-ball defensively and are the three players that will probably force the most turnovers. That might be exactly what Texas Tech needs after turning the ball over 24 times against Duke.

3. How They Match Up. This should not be much of a match-up, although UTRGV does have some decent size and aren’t a terrible match-up from a size perspective. Texas Tech should have a clear advantage from a bench perspective, although Smith and Bowe are both decent off the bench. I mentioned something during the Duke game on Twitter because someone wondered why Matt Mooney sees so much time with all of the turnovers (he had like 5 or 6 against Duke). Part of the reason is that he is an absolute technician on defense. If you get the chance, watch how he plays defense, not necessarily on-the-ball, but how he funnels offensive players to a particular spot on the floor based on the overall team concept. The rest of the team does this as well, but Mooney does this as well as anyone I can recall.

4. Reading Material. We get a pinch-hit from A-J Media’s Don Williams:

“I liked our fight. I liked our competitiveness,” Beard said Thursday. “We had a lot of poise in the game. We rebounded with Duke. They missed a lot of shots, shots they don’t normally miss, but we were still able to keep them the off the boards for the most part. So lots of positives.”

Tech didn’t take care of the ball well against Duke, committing 24 turnovers, and that plays right into the hands of UTRGV. The team from Edinburg averages 9.6 steals per game, 10th of 351 teams in NCAA Division I, and 18.14 forced turnovers, 12th in NCAA Division I. Aggressive defense is UTRGV’s calling card.

“So obviously some of the issues we had in the Duke game, we better clean up pretty quick,” Beard said, “because this team has the same type of aggressiveness on defense.”

No. 11/13 Texas Tech will host The University of Texas Rio Grande Valley at 6 p.m. on Friday in the final game of the 2018 calendar year at the United Supermarkets Arena and the last game before the start of Big 12 play next week.