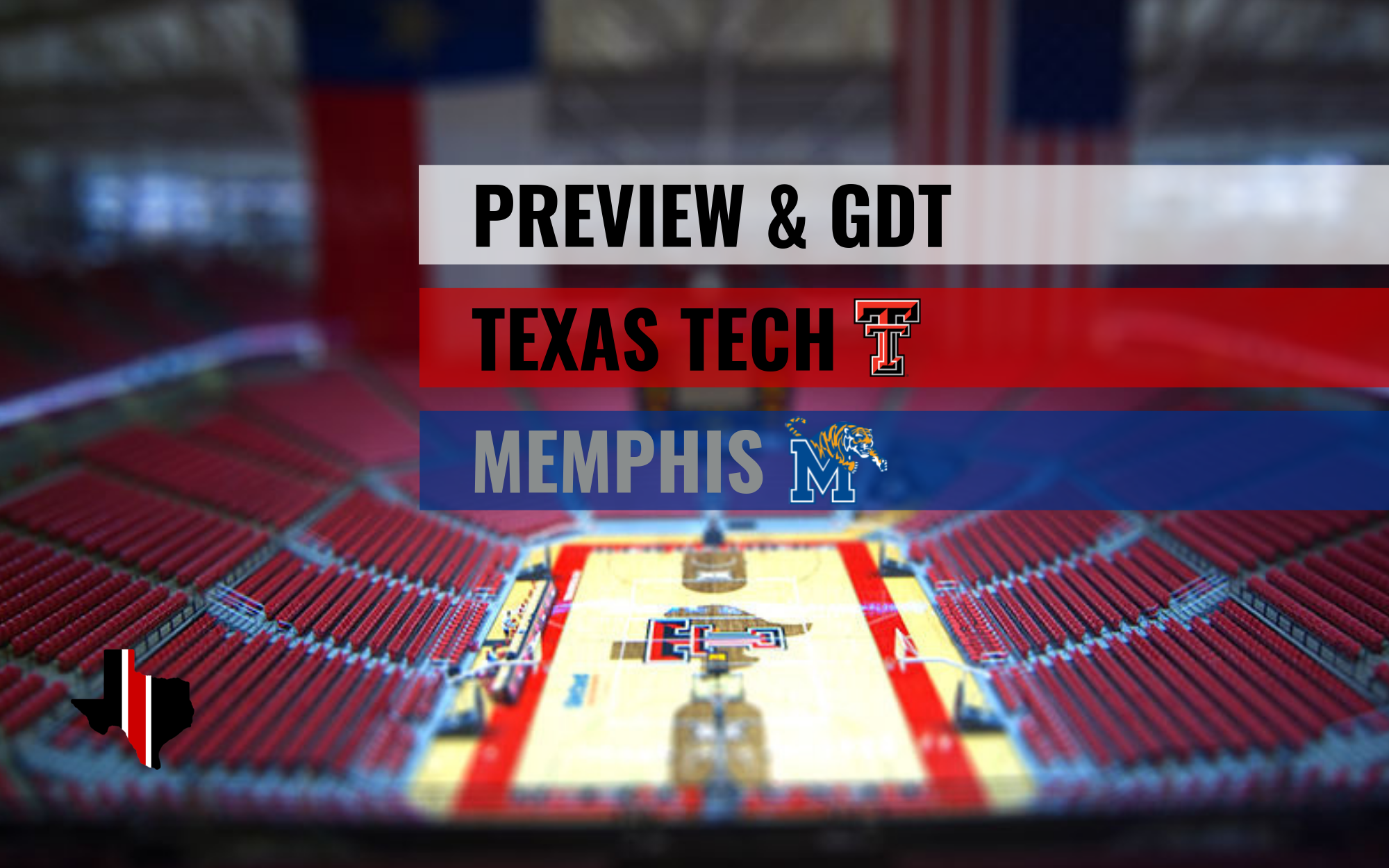 How to Watch: ESPNU | WatchESPN

1. Stats. Believe it or not, Memphis is a team that is closer to Norther Colorado than they are to Texas Tech. They’re close to being or are in the top third of the best teams in the nation, but not really much better than that, either on offense or defense. And Haslemetric thinks that this is a very lopsided match-up.

2. Scouting. Davenport and Parks are probably Memphis’ best tw oand most efficient players. Davenport is a very efficient rebounder and shooter from the field, he also has the ball in his hands quite a bit. Parks also shoots really welll, is a very good offensive rebounder, so that will be something that Texas Tech will need to watch. Second opportunities for a bad team isn’t good. Memphis is a team that likes to force turnovers and also get to the offensive boards, where they force teams to turn the ball over 23% of possession and grab 35% of offensive boards. That’s really high rates.

3. How They Match Up. I thought that Odiase would have more input in some of the earlier games, but he hasn’t and I forsee a bigger role this game. Parks is a player that’s physically similar to Odiase and he’ll need to keep Parks off the boards. I’d also say Harris is good, and being a smaller player he may cause some issues offensively, but he doesn’t have a high shooting percentage, it’s good, but not great by any means. You could let Lomax shoot the ball all day and he most likely won’t hurt you too bad. And the Tigers have played Oklahoma State this year, losing by 20 to the Cowboys.

The third-year coach of the No. 20 ranked Red Raiders will look to see if his squad can show some grit and validate its early-season success when it faces off against Memphis in a neutral-site contest at 1:30 p.m. Saturday as part of the Air Force Reserve Hoophall Miami Invitational held at American Airlines Arena in Miami, Fla. The game is scheduled to be televised on ESPNU.

“Whenever you’ve got a first-year coach, it takes a transition for them to form their identity,” Beard said of Memphis, which is led by first-year coach Penny Hardaway. “And I think they’re in the process of doing that. Some things that are obvious: they’re a fast, up-tempo team. They’re very, very dangerous in the break. You don’t want to get into a fastbreak kind of game with them. Number two, they’re committed to rebounding the ball.”

ut it’s not going to be fun if Memphis doesn’t execute against one of the top teams in the country — just ask Tigers coach Penny Hardaway.

Hardaway emphasized that the Red Raiders are “really good” not just once, but twice, in the opening statement of his media availability Thursday.

“They make you play the game the right way for the entire 40 minutes, not just the half,” Hardaway said. “We have our work cut out for us.”

SERIES/LOCATION: The Red Raiders and Tigers will be meeting for the seventh time when they play in Miami on Saturday. Memphis owns a 6-0 advantage in the series that began in 1954 with the Tigers winning a 75-66 game in Tennessee and most recently an 80-55 game in 1985 in Lubbock. The teams have played one previous neutral court game on Dec. 27, 1956 in Oklahoma City with the Tigers taking a 99-77 win. Texas Tech is playing in Florida for the first time since 2011 when the team had three games at the Old Spice Classic in Orlando and will be playing in Miami for only the second time ever. The last time the Red Raiders played in Miami was on Dec. 22, 1952 when they lost 79-64 to the University of Miami.