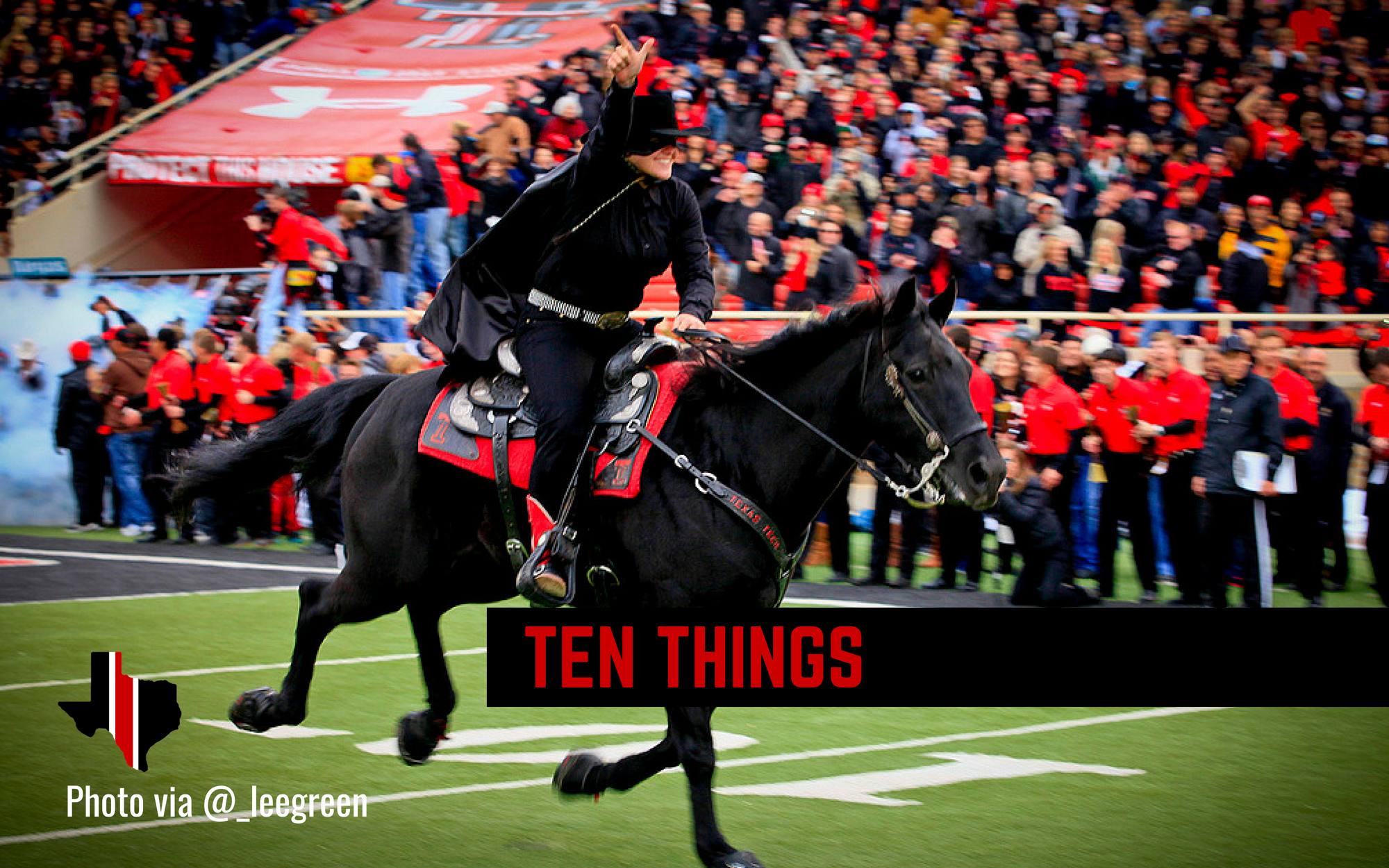 1. A Good Result. Hey, here’s a preview of this ten things, which is that I thought the team played really well, but Texas Tech was also relatively fortiutous to have Kansas settle for field goals or turn the ball over on three different times inside the 10 yard line or something ridiculous. If you ever wanted to know what ineptitude looks like, well, Kansas is it. Most normal teams can actually capitalize on those opportunities and actually score a touchdown or two. This games looks a lot closer if that happens. However, it didn’t. The defense made plays when the should needed to make plays, and two of those goal line stands were awfully impressive. The defense should definitely get credit for that. If you ever wanted to know why you should never let your program get to be as bad as Kansas is, it’s because losing is contagious and the Jayhawks just look inept. I actually think they’re relatively okay on defense, but their quarterback was just awful yesterday and maybe some of that is on the receivers, but this was an offense that was simply not in sync.

2. Bowman Was Pretty Good. Again, I’m being overly critical here, but that’s partly Alan Bowman’s fault for being so good to start the season. Bowman’s final line of 36 for 46, 78% completion rate, 408 yards, 9 yards per pass, 3 touchdown and 1 interception is good. It’s very good. There were a handful of times where Bowman got a little lucky with some of his throws, a situation where another defender for another team ends picking one of those iffy passes off. I thought that Bowman was a little uneven to start the game, some of it was his fault, some of it was penalties, some of it was bad running plays, some of it was turnovers. I really wanted Texas Tech to jump on Kansas from the start, but what ended up happening is that they just wore them down. Texas Tech didn’t score a touchdown until their 4th drive, but then ended up getting touchdowns on their 6th and 7th drives. Again, how lucky are Texas Tech fans that Bowman gets to be a bit off, still throw for over 400 yards and complete nearly 80% of his passes for 9 yards a pass.

3. Defense Was Danged Good. I thought the best part of the game was the defense. Giving up a trash touchdown to end the game shouldn’t take away from the fact that they were less than a minute from holding Kansas to 9 points, and if you want to take any solace, the defense held Kansas to 4.4 yards per play. And if you were to take away the 88 yard, 7 play drive to end the game, Texas Tech would have held Kansas to 3.5 yards per play, which would have been a season low. The Jayhawks’ only averaged 3.6 yards a play against Nicholls State. The defense is definitely rounding into shape and David Gibbs has definitely found something that’s worked, which is using his linebackers and an occasional safety or cornerback to blitz, creating pressure from different spots. The team had 8 tackles for a loss, 3 sacks and 2 quarterback hurries. Kansas’ quarterback only completed 44% of his passes and held their running backs to just 117 yards and 4.5 yards per rush

4. Third Down Domination. Usually the best indicator of a scoreboard domination is how well the offense and defense does on third downs, the Texas Tech offense converted 57% of their third downs, 8 out of 14, and the defense only allowed Kansas to turn the ball over on 27% of those third downs, 4 out of 15.

5. Offensive Wrinkles. It’s probably not a coincidence that Antoine Wesley has another terrific game when T.J. Vasher returns and pretty much plays most of the game. Wesley had 9 for 155 yards, 17 yards per catch, and a touchdown, while Vasher had 79 yards, 16 yards a catch, and a touchdown. The math on the field changes dramatically when Vasher is on the field, it gives the quarterback another option, and because the defense can’t roll over a safety on Wesley because then the quarterback can simply beat you that way.

And I’m sure you all noticed this, and I didn’t track who was playing running back, but Texas Tech ran a ton of 20 personnel (and they also ran 21 personnel to open the game for a couple of plays) with both Tre King and Ta’Shawn Henry in the game. In fact, of their 88 plays that I tracked, 32 of them were in 20 or 21 personnel and that’s good for 36%. In fact, in the 4th drive of the game, the one where the end result was the Tre King draw for the 18 yard touchdown, there were 8 plays, 7 of them were in 20 personnel. The 6th drive was similar in nature, an 11 play drive that was the T.J. Vasher touchdown that was scored on 3rd and goal from the 13, it was an 11 play drive and 8 of the 11 plays were in 20 personnel. The offense ran 40 of 88 plays in 10 personnel, good for 45%, which was by far the most. And what had been a really popular personnel group, 11 personnel, Texas Tech only ran 8 out of 88 times, which is about 9% of the plays.

I think I read that Caleb Killian was maybe injured in this game relatively early, which may have played into some of the personnel decisions, but it’s interesting that King and Henry were the fallback.

6. Things That Befuddle Me. This is probably overly critical again, but sometimes I do not understand why De’Quan Bowman returns certain punts. I think I’m at the point where I’m fine with Bowman just fair-catching everything unless he thinks it will bounce in the end zone. There’s just too many weird decisions that end up being negative plays and I don’t want any negative plays.

Strangest game I’ve ever seen from Jack Anderson. Anderson gets called for 3 penalties, while I don’t remember him getting called for a penalty thus far this year. And two of them were holding penalties and in my notes, I wrote that both penalties were crap calls, or at least very cheap. In fact, in that first drive, Anderson gets a holding call on 1-10 from teh 19, then on the next play, Anderson can’t pick up a blitzing linebacker and Bowman has to throw it away, so Texas Tech went from 1st and 10 from the 19, to 1st and 20 from the 29, then an incompletion results in 2-20 and Texas Tech ends up settling for a field goal.

I think you’re going to see defenses continue to pick on Desmon Smith. He’s continually getting picked on by opposing offensive coordinators and when he’s in the game, it’s almost automatic that the quarterback will try to get the ball to the receiver he’s covering. If I had to guess, my thought is that Gibbs has a rotation, and he’s keeping to that rotation, which I understand. If Damarcus Fields or Adrian Frye go down and Smith hasn’t had any playing time, that’s bad news for everyone.

7. Kicking. How nice is it to not think twice about field goals. Clayton Hatfield is 9 for 10 on the year, his only miss was against Oklahoma State. Hatfield made both field goals yesterday, a 42 yard and a 48 yard field goal. He’s made all of his extra points. For comparison purposes, Texas Tech was 12 of 23 last year and although it was nearly automatic for extra points, 56 of 59, to only make 52% of those field goals was devastating last year. Especially the overall volume that they kicked. I’m super happy for Hatfield and the team and don’t forget that Hatfield’s field goal against TCU was THE difference in the game, while TCU’s kicker missed an opportunity. That’s one game where he’s made a huge difference.

Tortilla Tossin’ Player of the Game: The defense. Should I probably pick just one player? Maybe, but it’s my blog, so I’m going with the entire defense. They played a fantastic game and Kansas isn’t a good team, but they did what you’re supposed to do against bad teams, which is dominate. And other than the last drive, they did just that.

Guns Up Offensive MVP: Your guy, Antoine Wesley gets the nod from me, 9 catches and 155 yards with a touchdown, plus a ton of huge plays that not many receivers can make.

Sheriff Star Defensive MVP: Kolin Hill, who has lost time to Tony Jones through the year, had a really nice game, 4 tackles, 2 sacks and a really nice game with Jones most likely a bit injured this game. It was all on him and he did well.

The big thing was the somewhat unexpected (at least for me) return of Alan Bowman:

Q. When did you know that Alan was going to be a go for today?
KLIFF KINGSBURY: It’s been a while. It’s been a while. We just wanted to make sure practice went well. Didn’t want any setbacks. But we felt confident that, I don’t know, a few days after he got out of the hospital that he’d be ready for this date. We just wanted to make sure he held up, felt good, his breathing was fine.

Q. How would you assess Alan’s performance today?
KLIFF KINGSBURY: I thought he knocked some rust off in the first half. I felt the last couple drives he was really locked in, made some nice throws. It was good to get him hit so he feels comfortable again. We’ll have a full week next week to get him a bunch of reps. Hopefully we just continue with progress.

And Kingsbury was maybe slightly disappointed with the running game today:

Q. What did you see out of the offensive line?
KLIFF KINGSBURY: Today I didn’t think we ran the ball as well as we would have liked. A lot of that had to do with Kansas. They were taking away the run. We we’re able to hit some things in the passing game. But they’re not a bad team, Kansas. They play hard. They do a good job coaching. So I felt like we should have run the ball better. But I got to give them a lot of credit for stopping us.

Kingsbury on David Gibbs and the defense:

Q. What has David Gibbs done this year to make your defense click?
KLIFF KINGSBURY: Yeah, I just think continuity on the staff is huge, right? Those guys have grown up in the system now. He’s going into year four, he’s recruited to his system. They understand it. Same terminology. A lot of those guys are back from last year. We still got a long way to go. We play the good offenses, we got to step up, continue to keep it close. I’m really proud of what they’ve been doing. It’s good to see them have some success. They’ve been through a lot, a lot of those seniors.

Q. You aren’t where you are last year turnover ratio-wise at this point, but you’re winning games. Does that speak to team mentality defense?
KLIFF KINGSBURY: Yeah, no doubt. We want to be better at that. We were first in the conference last year at turnover margin. We’re not there yet. But they’re playing great on third down. That’s helping us get off the field. We’re getting a lot of wins there.

And Kingsbury on the offense’s ceiling and going up against the Iowa State defense:

Q. What is the offense’s ceiling?
KLIFF KINGSBURY: It can be really good. It can be really good. You look at the play-makers outside, the O-line, all back from last year, some dynamic running backs, quarterback that’s making good decisions. We’ll see where it goes. But we’re going to be tested next week, one of the best defenses in the country. Said it three times already, but they’ve had our number, so we got to have a better plan and execute as a higher level against Iowa State.