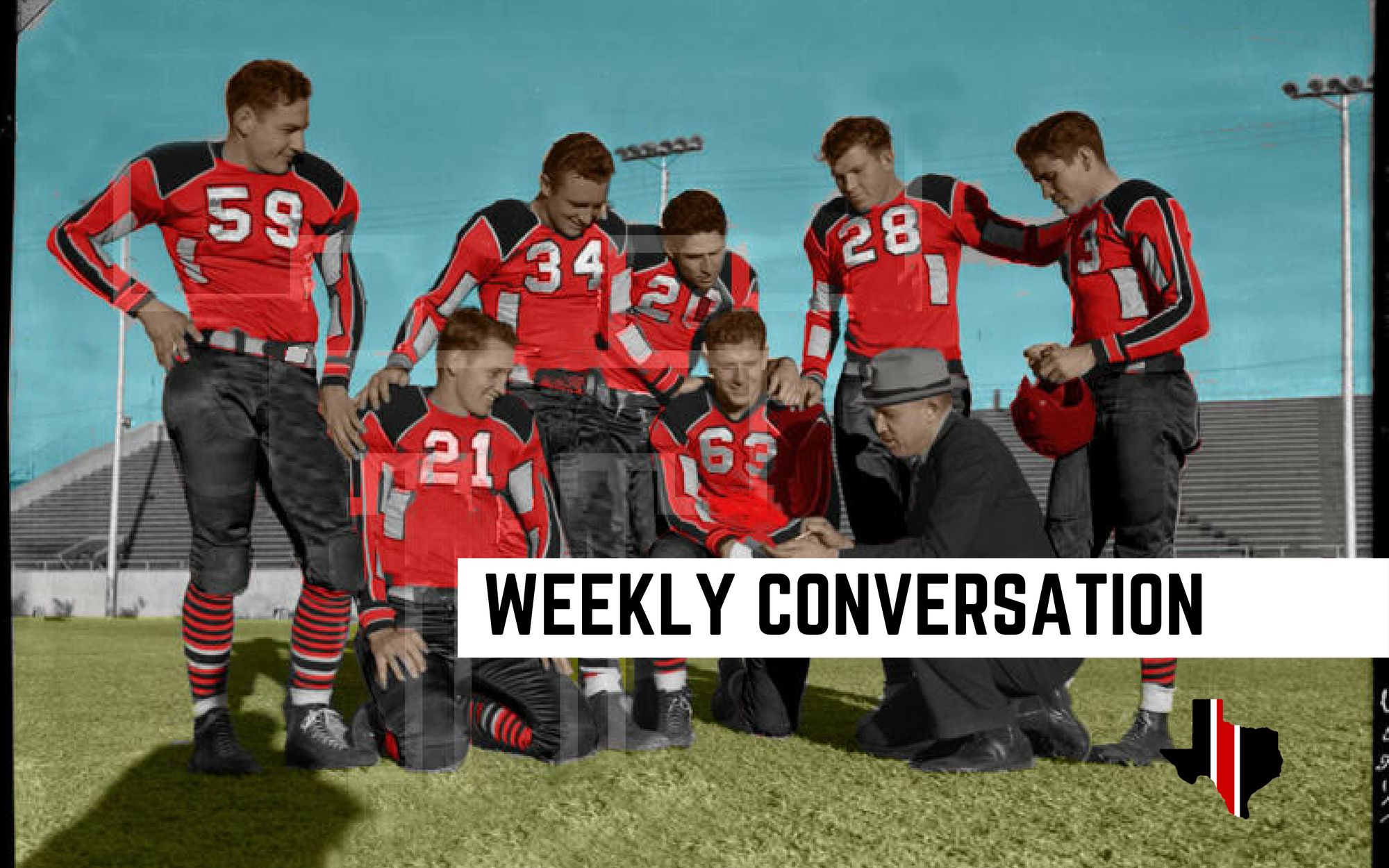 Seth: So when are you going to Vegas?

“If it’s Duffey, I hope Kliff dials up some plays that use his speed and evasiveness to exploit the TCU defense. That fourth down scramble late in the game was a thing of beauty and I hope we get to see more of that. We’re probably gonna need to plan for a couple of interceptions so hopefully they won’t be too damaging and we can overcome. On defense, Tech just has to be ready to contain that speed. They’re so fast.”

You pretty much nailed what you thought would happen against TCU and I hope you’re on your way to Sin City to mortgage your entire future.

The TCU game was a lot of fun to watch and it was fun to see the Texas Tech defense play so well on a national stage and although the offense struggled for the most part, they made plays when the opportunity presented itself. Oh, and your guy Panazzolo!

Travis: Yeah, it was like I was seeing the future or something. I even picked a win by field goal! Who knows, maybe I’ll catch a flight to Vegas. We’ll see, my wife will probably think it’s a great idea.

And you’re right, it was a lot of fun to watch, especially with all the bad memories in that place. I was definitely happy to see the punter doing well and get recognized for it. I’ve been critical of him but he had a great game and was crucial down the stretch.

The best part was to hear Herbstreit slowly come around to the fact that Tech has a solid team. He was trying to play them off as the loosey-goosey, undisciplined group that we’ve all come to know and love, but as the game wore on you could tell he was truly impressed with their grit and toughness. It was awesome to see.

Travis: So I wanted to dig into one of our favorite topics: writing. My father-in-law is probably the smartest person I’ve ever known. He was a petroleum engineer, retired at 50 and has written 10 novels (all westerns and all good) in his life. My wife says she remembers going to sleep as a kid with the sounds of typewriter keys slapping a page.

He also suffers from bipolar disorder. He’s open about it and is never shy about discussing how it’s affected him over the years. What’s funny is he told me once he’d trade in all the lows for just one more high—it was that powerful and impactful. He only started taking medicine for it after his writing partner committed suicide (he suffered from the same thing). Wayne, my f-i-l, realized he needed to get help.

What was interesting is that his writing slowed down dramatically after he started treating the illness. I asked him about it once, and if he thought the two events were correlated, but he didn’t necessarily think so. He told me that for so long it felt like a bear had been chasing him; that he felt compelled to write to keep the bear away. Then, one day, the bear just stopped and turned around. And although it seems to me the medicine had a lot to do with that, he’s adamant that that’s not the case.

I think a lot about his analogy, because it seems like the bear stopped chasing me about a year and a half ago. I used to get up in the middle of the night to write, or would write anytime I had a free minute. But I just don’t have that anymore. I still enjoy it, especially when I have a good story idea, but it just seems that there aren’t stories that I have to get out anymore.

Which brings me to my question for you: how do you do it? I mean, it’s so impressive that you still have the discipline and desire to pump out words everyday and it’s been something I’ve been meaning to ask you for awhile, especially after I see you churn out a 10 points on a Sunday morning or another football season’s worth of content. Is a bear chasing you, or is it something else?

Seth: Yeah, the bear is chasing me. Take this morning for example. It’s 4:49 a.m. and I’ve been up since 3:35 a.m. I just finished writing the Morning Stake and I’ve got to start running at 5:00 a.m. so I can get in a run before I need to get the kids to school. Typically, from the minute that I get up, my entire day is completely filled until I pass out. In fact, at one point, it got so bad that I’d pretty much pass out without brushing my teeth before I went to bed, so I had to essentially set a reminder on my phone to brush my teeth because I’d just go to bed and/or pass out and completely forget about it.

The bear that’s chasing me is most likely my job. I woke up this morning because I was thinking about a client and the situation he’s gotten himself into and I have nothing to do with the situation he’s in, but I feel responsible in some form or fashion. So I’m having a dream about dictating a letter to him regarding his situation because it’s not the outcome that he wants. Again, not my fault, there was another attorney before me that gave him some bad advice, but here I am feeling responsible. So the bear that’s chasing me is my work, without question. My job is really pretty depressing if I think about it too much. I had a client who also goes to my church, he needed a Will as he had been battling cancer, but he’s tired of fighting it and is going to stop treatment and go on hospice. I go out to his house, visit with him and his wife. They are lovely, hard-working people. I get their Wills done and within a week and a half, the husband has died. He’s gone from my life forever and more importantly, he’s gone from his family’s life forever. That weighs on me. I’m probably in the wrong profession, but this is sort of what I fell into and I know a lot about it, but I take a lot of it home with me.

That’s the bear that’s chasing me. When I get home I do this all day to keep my mind occupied so I don’t think about work (Yes, I know that there’s a bright side to this, the fact that I got a Will done for a client that normally would have died without one, but I don’t focus on that for whatever reason. It’s not how I’m wired.).

Travis: Man all of that is just extremely impressive. I don’t know how you find the energy.

Seth: Now that we’re all totally uplifted, the best thing ever for me this week is a pair of shoes that I bought and I’ve worn them for every single win thus far. Oh, yes, the red Adidas Munchen. The first game I was in Houston and I had not ordered them yet. The West Virginia game, I was out for Youssouf’s soccer game and I didn’t wear them because it had been raining and I didn’t want to get them dirty. Now, I know that this won’t last forever, but if you ever wanted a pair of comfortable red shoes, well . . .

Travis: So I’ve become a bit of a trail mix connoisseur and I like to explore new and exciting trail mixes. Target has a nice one that has dried cherries, which is a nice change of pace over the raisins. And most of those bags are filled with peanuts so I try and stay away from that cheap trash. But a few weeks ago, we were at Sams, feeding the kids lunch from all the sample tables in the frozen foods section, and I spotted this giant bag called Triple Berry Nut. It’s got walnuts and chunks of chocolate and almonds and pumpkin seeds. It’s two and a half pounds of pure joy and creator of late night guilt. I love it.

Seth: The NBA is starting up and I think last year I asked you what were your five favorite players and now I’m going to ask you for your five least favorite teams. Hell yeah.

1. Spurs – An in-state rival and I very much disliked Bruce Bowen and Dirk scoring that 3-point play in the WCF was so choice
2. Lakers – Sweeping the Lakers in 2011 after years of the Lakers
3. Jazz – Although the current version of the Jazz I actually like, but the Stockton-Malone combination was a huge nemesis
4. Heat – After losing in 2006 and then winning it all in 2011, it was sweet justice
5. Rockets – I always loved Olajuwon and how he played and truthfully, the Rockets and Mavs really weren’t great at the same times, but more or less get the dislike because they’re in-state and Harden is an annoyingly great player (he’s great, he’s just annoying if he’s not on your team)

Travis: I know this sounds like a cop out but I’m such a fan of the league it’s hard for me to pick out teams I don’t like or hate. So, I’ll list the teams I’m least interested in.

The NBA has done such a fantastic job of building around their established stars and facilititating the creation of young stars that it’s hard to find a game I’m not interested in watching. It’s just the best.

Seth: I should clarify, that I’m way past the dislike right now. Almost all of those dislikes stem from my much younger days when I was much more emotionally engaged and ready to DDT Karl Malone. I’m much more like you nowadays, I enjoy watching pretty much any game and will have an NBA game on in the background if I’m working on blog things.

Travis: So how do you think things will play out this weekend? I think this is going to be a tougher slog than most expect and there will be some handwringing from all of us as a result. I’m happy that this isn’t an 11am game but I see a dog fight.

Seth: As to this week’s game, I’m like you, I think the Texas Tech offense is really sort of up and down, the Kansas defense can get gobs of turnovers and Duffey can be prone to turnovers. I think there’s definitely an opportunity to run on Kansas and I’d love to see that, with Duffey taking shots down the field as the opportunity arises, either that or run an RPO on every single play (I’m joking here just in case we’re not all on the same page).

Travis: I’m gonna dance with the horse I rode in on and say Tech wins 31-28 on a last second field goal.

Seth: So the spread is 18 and I think that’s a little high, I could see Texas Tech winning by a couple of touchdowns, but it won’t be an absolute thrashing. I’ll go something like 35-20 good guys.