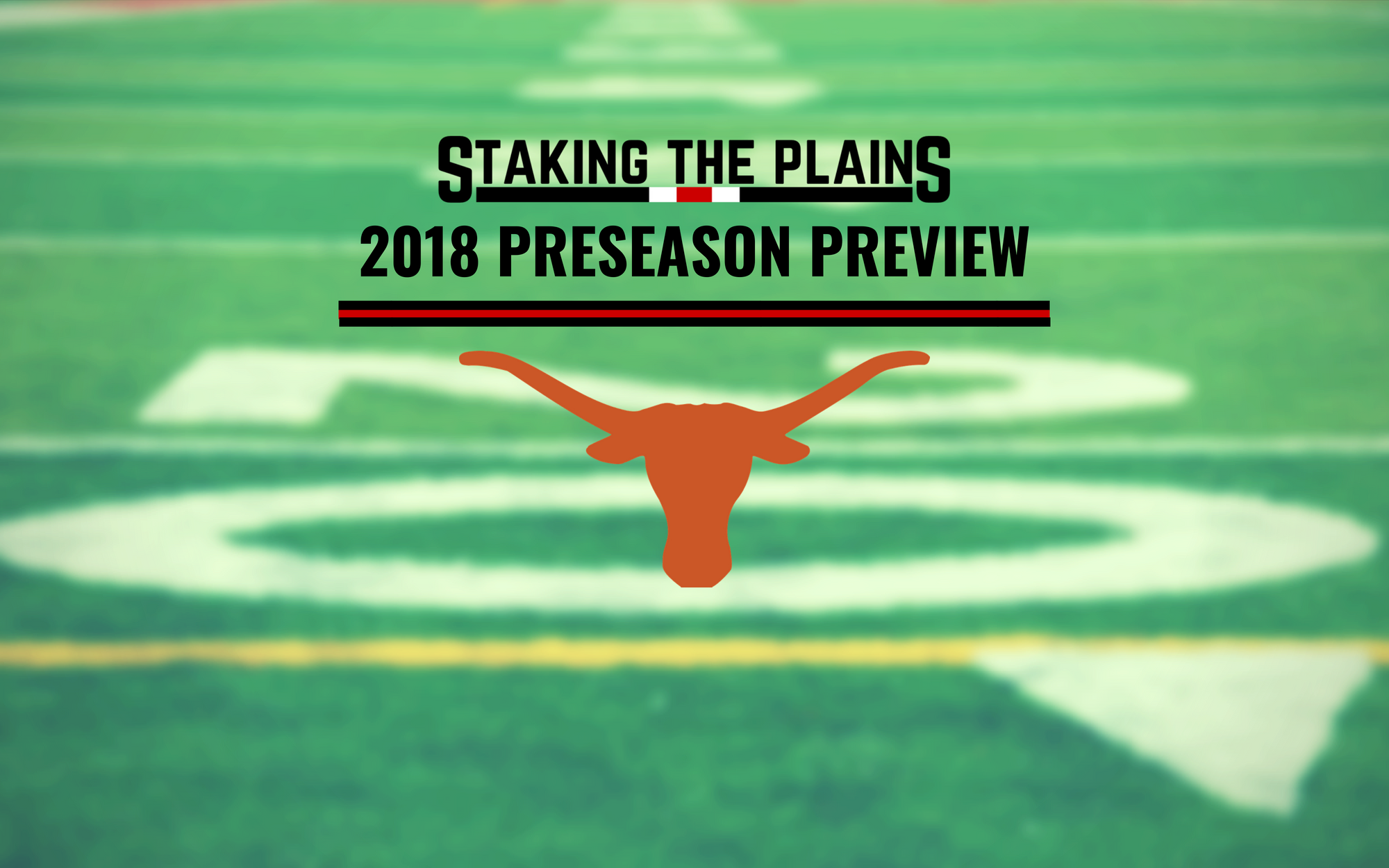 QB Sam Ehlinger (6-2/230): I think that Ehlinger gets the nod at quarterback, but he’ll have to get better with his decisions. Ehlinger is dual-threat, running for 480 yards with 2 touchdowns while throwing for 1,915 yards, 11 touchdowns, 7 interceptions and completing passes at a 58% rate in 9 games last year. The question last year was that Ehlinger was knocked out with a concussion and returned after two games. Ehlinger couldn’t stand up for 30 seconds, literally lifeless and was back in the game after 5 plays.

WR Collin Johnson (6-6/220): Johnson was the leading receiver, he only has a 55% catch rate with 55 catches and 765 yards and 2 touchdowns, but he does catch 14 yards per catch (not exactly great, but not terrible). Lil’Jordan Humphrey (6-5/225) is the other wideout and this is a really big receiving duo and they were both sophomore years and we’ll see how much they improve.

LB Gary Johnson (6-1/220): Johnson returns with 49 tackles, 6 tackles for a loss, 2 sacks, 12 run stuffs and 1 forced fumble. Very productive, but a lot of the production from last year has graduated, but Johnson should see a pretty significant bump in production.

DE Breckyn Hager (6-4/245): Hager is one of those guys that is getting a lot of publicity and truthfully, guys like Kris Boyd and Davante Davis and Brandon Jones would be more worthwhile guys mentioned here. Hager did play better as the year progressed and he got 4 of his 9 tackles for loss, one each game, over the last four games, but just 1 sack, against Kansas, in his last four games. It’s very strange to see a guy get so much publicity, that just has 22 returning tackles when there are guys who are maybe more talented.

People smarter than me wonder why Tim Beck is still the offensive coordinator, and really, maybe it’s Herman who is calling the shots for the most part, but Beck doesn’t exactly have the best track record as an offensive coordinator. The Longhorns added Herb Hand as the offensive line coach after being at Auburn (no idea why he was let go) after a two year run at Penn State. Hand is sort of a guy beloved by the media and he has had a really nice run a an offensive line coach. Drew Mehringer is the passing game coordinator (had no idea they had one) and Mehringer was at Rutgers for a year in 2016 and in Houston the year before that. Stan Drayton, the running game coordinator, and is also the associate head coach. He was with the Chicago Bears in 2015-16 and at Ohio State before that, which makes the connection to Herman more clear.

Todd Orlando is a dude and I think he’s a fantastic defensive coordinator. Orlando has really worked up the coaching food chain and he really started at the high school level in the mid-90’s, and worked his way to UConn, then Florida International, then really made a name for himself at Utah State before going to Houston with Herman in 2015-16 and then to Texas. Orlando really gets results and he’s in line to be a head coach sooner rather than later.

Defense is fantastic and the offense should probably improve, they return four of five offensive linemen and add Rice transfer Calvin Anderson who will probably start at left tackle.

This has been so weird for the Longhorns. A former player tweeted out that the some of Charlie Strong’s players weren’t appreciated by Herman, and then the whole situation with Ohio State where Herman was allegedly angry at losing a recruit to Ohio State, then encouraged Courtney Smith (if you don’t know, go Google it) to come forward with abuse allegations against Zach Smith, the former receivers coach for Ohio State and right hand man of Urban Meyer. There is no love loss between Herman and Meyer and the dynamic is just fascinating from afar.

I think that Texas will most likely have an uptick in the offense, but I don’t know if it will be enough. I have a belief that Orlando will get things done defensively, but Texas being held back offensively has a lot to do with personnel that I think the staff is trying to turn over. Ehlinger is good, but as mentioned above, has to be better about turnovers. The other item is that Ehlinger thinks he’s a running back and I think in today’s day and age, that’s great, but that’s going to get him more concussions. Supplement, don’t feature the running. There are running backs there that are just fine, but I think that Ehlinger wants to be a hero at times and he could do a better job of letting the game come to him.

Defensively, Texas will have replaced only two defensive tackles and a linebacker (Malik Jefferson) so they return quite a bit from that perspective.

Texas Tech will get Oklahoma and Texas back-to-back at home. Should be quite interesting.

Disclaimer: To any Texas fans, I’m not a Texas expert, just trying to learn and educate myself as much as I can over the course of writing this post.