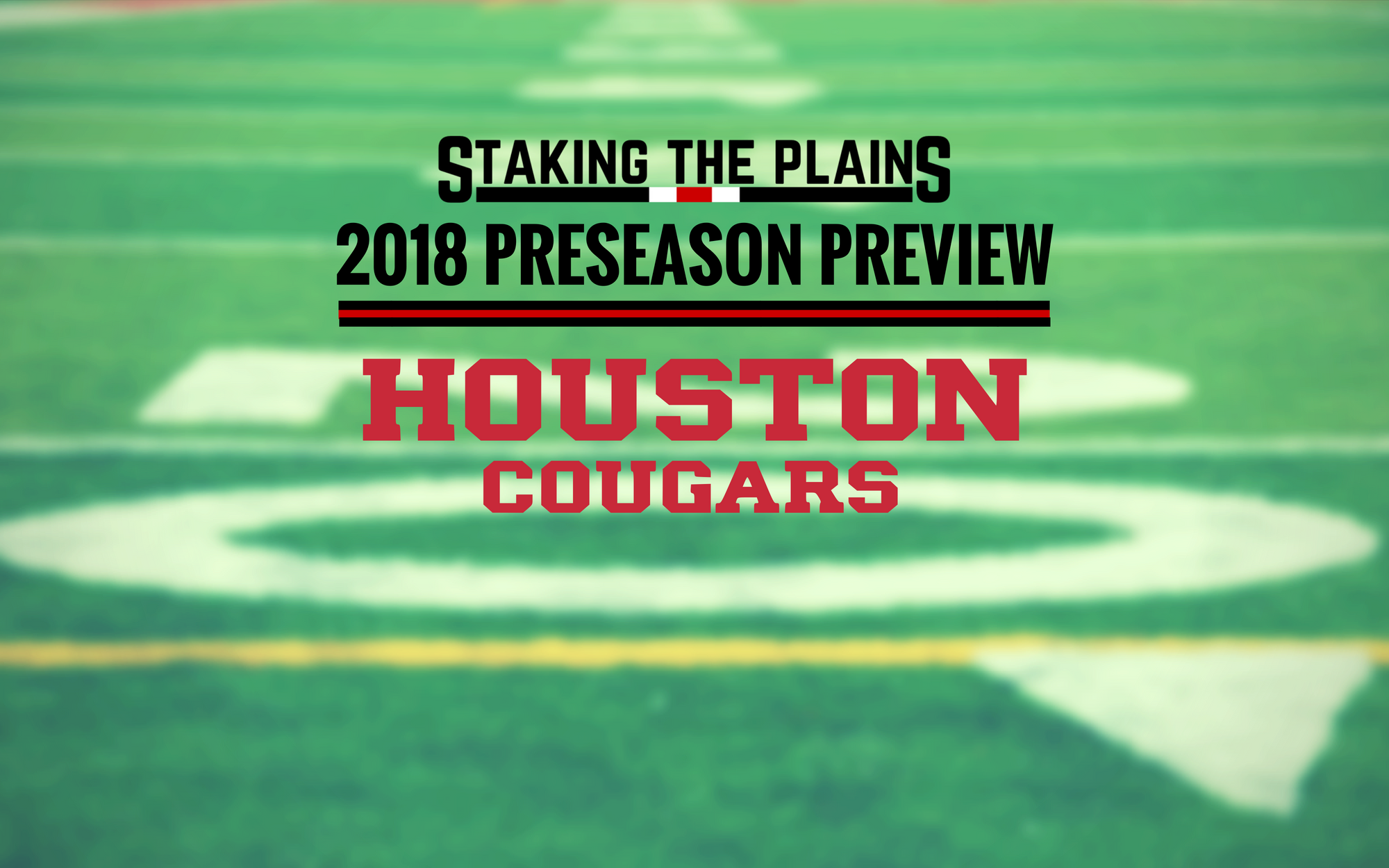 The Cougars are the third game of the year.

QB D’Eriq King (5-11/190): King was playing receiver before being converted to quarterback and had 36 catches for 264 yards and was moved to quarterback at some point of the year where he passed for 1,260 yards, completing 65% of his passes with 7 touchdowns and 2 interceptions. King also ran for 417 yards on 63 carries and had 8 touchdowns, so King is a terrific athlete that is very explosive in what he can do.

RB Terence Williams (6-2/222); WR Raelon Singleton (6-3/215): I’m adding two players here, both are transfers and both are immediately eligible (I think). Williams is the former Baylor running back who found very little playing time in Matt Rhule’s offense, but rushed for over 1,000 yards and had 11 touchdowns the last time that Kendal Briles was in charge of the offense in 2016. Williams is an immediate upgrade than anyone they have on the roster and he knows the offense. Singleton transfered from Utah, caught 36 passes for 531 yards, and 4 touchdowns. There’s hardly any experience returning for Houston at the receiver position, so someone like Singleton will probably play pretty heavily in Briles’ system, catching 64% of the passes throw his way while a Ute.

Where do we start? How do we not get into the off-the-field stuff, where Major Applewhite, the head coach, had an affair with a student right before his daughter was born in January of 2009. At the time, Applewhite was the offensive coordinator for Texas and was disciplined (if you want to go into a deep double-standard wormhole, go Google Bev Kearney). Applewhite succeeded Tom Herman as the head coach and after everyone at Houston declared that the Cougars don’t settle for anything less than 8 wins, Applewhite wins 7 last year. The losses were to Texas Tech by 3, a 45-17 loss in Tulsa, a 5 point loss against Memphis at home, a 3 point loss to Tulane, and then a 6 point loss in the Hawai’i Bowl to Fresno State.

The offense was just okay last year, partly because Applewhite misevaluated Kyle Allen as the quarterback to quarterback this team from the get-go (this maybe cost them the win against Texas Tech) and Applewhite went out and hired Kendal Briles and Randy Clements. Briles was the offensive coordinator when his father, Art Briles, was the head coach and is said to have said, “Do you like white women? Because we have a lot of them at BAYLOR and they LOVE football players.” Briles spent last year at Florida Atlantic where he helped the Owls become the 6th best S&P+ offense in the country. Despite any disdain for Briles, expect the offense to be significantly better.

The D’Onofrio hire is one that I don’t really get, other than he was the defensive coordinator at Miami and when the Canes hired Mark Richt, D’Onofrio was let go. Those Miami teams before Richt were sort of know for being underwhelming (maybe this was just the team in general) and D’Onofrio’s defense last year was pretty good, but how much credit do you give to him and how much credit do you give to Ed Oliver? Houston was good in a lot of areas, but not good in creating havoc, except for Oliver. And Houston loses a handful of seniors from last year’s team that were pretty darned good. He’ll have some guys he will need to replace.

Again, good, but not great, not enough to get over the 7-win mark for Houston. I think there’s very little doubt that the offense is going to be significantly improved. With Allen at quarterback, the offense just wasn’t that good and a lot of last year’s stats have him playing probably half of those games. The defense could get slightly worse, they’ve pulled in a few transfers on the defensive side of the ball (Nick Watkins, transfer from Notre Dame and Deontay Anderson from Ole Miss) that could help immediately.

This is, at least for me, one of those “should win” games for Texas Tech. Texas Tech is probably an early favorite, so long as the Red Raiders take care of business against Ole Miss and Lamar. Houston will probably be much better offensively this year, but may not be as good defensively. We’ll have to sort of wait and see how some young guys step up and if the two big transfers can make an impact. I used to not really have any thoughts about Houston, either positive or negative, until they hired Kendal Briles and now, I’d like to see them fail over and over and over. I know that this is incredibly petty and the problem could be solved by getting rid of Briles and I’ll go back to being indifferent.

I think that Texas Tech will be able to handle Oliver, much like last year. An improved running game for Texas Tech should help we’ll probably find out by this game if whoever is playing quarterback will actually be effective. They will have had two games, one against tough competition and the other against relatively easy competition. I’m sure that both signal callers will have played, maybe even all three. I think that this will be a 6 or 7 point win for Texas Tech. I’m optimistic the morning I’m writing this.

DISCLAIMER: If there are any Houston fans out there reading this, I’d like to clarify that I’m sure I missed some stuff regarding your team and probably got things wrong. I’m not trying to be an expert of your team, just trying to educate myself enough to be knowledgeable heading into the season.