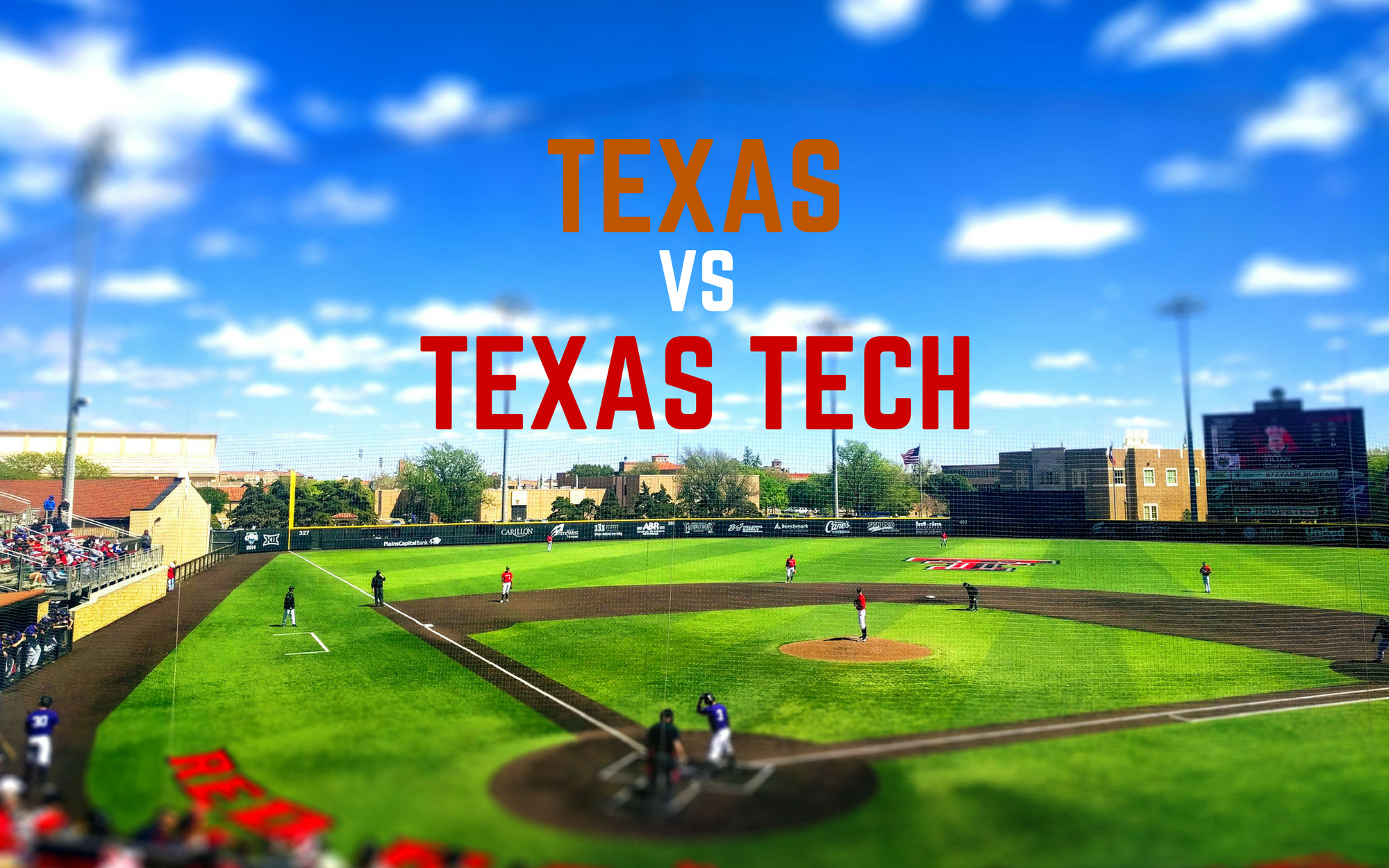 The Red Raiders host the Longhorns in a pivotal Big 12 series.

The Longhorns have improved significantly over a year ago, finishing 39-24 (11-12) last year, or at least, theoretically, they could finish at least 1 game better depending on how this series with Texas Tech goes. The year for UT didn’t start off that well, losing 2 of 3 against LSU, winning 3 of 4 against Northwestern and then losing 3 of 4 to Stanford. They made their mark early in the conference by winning the series against Oklahoma State, sweeping Kansas, sweeping Baylor and then winning the series against the Sooners. The biggest head-scratchers for the Longhorns was losing 2 of 3 to Kansas State and West Virginia.

A couple of additional things. Today is May 4th, so it is Star Wars Night:

Also, it is the final home series for the seniors, but as head coach Tim Tadlock said, there’s still a lot more games to be played. Kinda funny.

Statistically, Texas Tech should have some advantages at the plate and on the mound, the key for the Red Raiders, which is really the key for every series, will be keeping the walks at a minimum and for Davis Martin to get his groove back at home. And you’ll need to note that John McMillon is not listed as a starter on Sunday, so we’ll see what happens whenever Sunday rolls around. I mentioned last week that the Red Raiders were 22-2 at home, while Texas is 7-10 on the road. That may be the key to the whole enchilada.

Through it all, though, the senior has kept an eye on the final product rather than focus on the present.

“Obviously, I thought it was going to come, but actually in some other points I thought I’d never make it here,” Dusek said of his senior day moment. “Having two major surgeries, just having no idea if you’re going to come back from it is kind of tough to handle. … At one point in my career, maybe I thought I wasn’t going to finish — at least not in a baseball uniform playing for the team. But it’s definitely and exciting feeling that I’ll be out there on Sunday knowing I finished. Ready to move on from there.”

Dusek, along with fellow seniors Michael Davis, Connor Beck, Zach Rheams and Jose Quezada, will look to end their senior home campaigns on a positive note when No. 9 Texas Tech hosts No. 24 Texas for a three-game Big 12 series inside Dan Law Field at Rip Griffin Park. The first contest is set for 6:30 p.m. Friday and it scheduled to be broadcast on FOX Sports Southwest Plus.

HookEm’s Kirk Bohls: At stake in Lubbock for Texas? A possible Big 12 baseball title and national seed, that’s all

That said, Texas (31-17, 12-6 Big 12) is sitting pretty even though Pierce said the Longhorns can play “ugly, ugly, ugly at times,” like for eight innings on a Tuesday night. Again, didn’t really matter because they can still muster up some magic.

How else would one explain light-hitting David Hamilton crushing a walk-off grand slam to key a five-run ninth-inning rally for an 11-10 win over Texas State? Hamilton’s known more for his fancy glovework and his 26 stolen bases, but there he was coming through with the biggest home run of his life for Texas’ 12th comeback victory.

The astronomical odds never seemed to faze Josh Jung. Then again, everything Texas Tech’s sophomore third baseman has done to this point only served to stoke his grand ambitions.

The former MacArthur star is determined to make an MLB roster one day. No one doubts he’s capable. He claimed Big 12 freshman of the year honors last season and has been even better as a sophomore, slashing .398/.493/.688 with nine home runs and a team-high 61 runs batted in for the ninth-ranked Red Raiders (34-12, 11-7 Big 12).

He’ll play a pivotal role in Tech’s weekend series with Texas (31-17, 12-6) in Lubbock, which will have a huge impact on the Big 12 race. Just don’t expect Jung to suffer adversely from any of the tension wafting through Rip Griffin Park.

I started to watch this game and it was 1-1, had to get up to go do something and it was 7-1 when I got back. It wasn’t magic, it was hits on hits, including a home run for Texas that resulted in those 6 runs for UT. Davis Martin wasn’t very good (L, 6-4) the second inning, but got his groove back after that. The problem was that he gave up 7 runs, all earned, 3 walks and striking out 4. Texas Tech would battle back, but then the Longhorns would tack on 5 more runs in the 8th and 9th inning, mostly behind the not-so-great pitching of John Henry Gonzalez who allowed 5 runs, 4 earned, in 2 innings.

The offense wasn’t great, but they had 12 hits, which is plenty, but they left 12 men on base and that’s probably where you can start in terms of “only” scoring 6 runs. Gabe Holt got the start in left field with Michael Davis starting at second and Grant Little starting at shortstop. I think that was fine, but it was certainly different. Holt went 3-5 and scored 2 runs. Zach Rheams went 2-3 with 2 RBI including a 2-run home run, and Cody Farhat went 2-3.

Tadlock did not sound real happy about the catchers, “neither one of them were very good, if Koelzer were healthy, he would have caught.” He wasn’t upset at the base running error from Farhat, said that it was a physical mistake.

This was more good fun times. Caleb Kilian (W, 8-1) went 6.1 strong innings, allowing 4 runs, only 2 earned, walking 1 and striking out 2 in 95 pitches. Caleb Freeman pitched the end of the 7th , allowing a run (not earned), walking 2 and striking out 1 and Jose Quezada and Connor Queen finished off the 7th and 8th innings. You could say that the bats were the story of the game, mustering 13 hits, walking 10 times and 16 runs sounds about right. Amazingly, Gabe Holt did not record a hit, but pretty much everyone else did. Cody Farhat went 4-4 with 3 RBI and 3 runs. Josh Jung homered and went 2-5 with 3 RBI and Michael Davis also homered, going 2-4 with 2 RBI.

Well, another losing series and another disappointing Sunday. Before we get to the bad, I will say that I was encouraged with Ryan Shetter getting the start and Ty Harpenau combining was fine. Shetter gave up 3 runs in 3 innings and Harpenau gave up 3 runs in 4 innings, while striking out 5. On senior day, Michael Davis had a good one, going 3-4, but the problem with Davis and the rest of the team is that they couldn’t push any runs across the plate. Cam Warren went 2-4 with an RBI and leadoff Gabe Holt went 2-5, but was left on base 3 times.